#WhileYouWereTexting – Is Technology Making You Miss Out On Life?

The part with B1 & B2 is  a WhatsApp conversation. I just wanted to highlight the obsession and addiction we have with our phones, which causes us to miss moments that transpire around us. 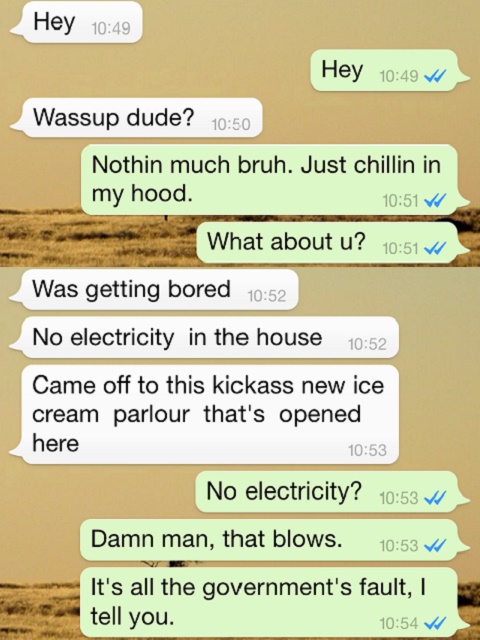 Just chillin’ in my hood.

No electricity in the house.

It’s all the Government’s fault, I tell you.”

“This incredibly pretty chick just sat behind me!!!”

“No kidding! Tell me more.”

“Damn cute man, real pretty face and got quite a nice body as well.”

“I just looked behind and spotted her coming towards the table. She glanced at me as well.”

“At an ice cream parlor? What do you think?”

“Wait, she’s reading something. Book of some sorts.”

“I think she’s here because of the power cut as well.” 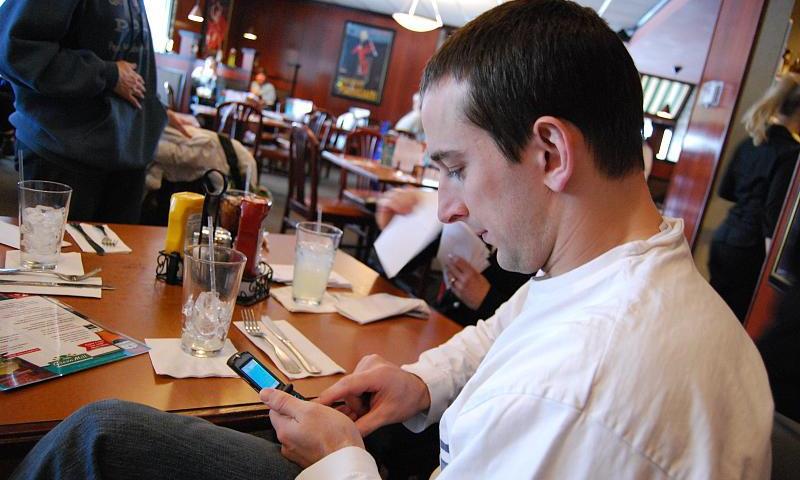 “Same reason as you huh?”

“I saw you while you were entering the shop.”

“I saw you when you were entering the shop?”

“Yea, because every girl dreams about the creepy Prince Charming who suddenly swivels out of nowhere.”

“Just go and sit across from her.”

“Sit across? Isn’t that being slightly presumptuous?”

“Random guy sits across from her, she’ll definitely freak.”

“Sounds about right to me.”

“Dude, should I ask for her number?”

“I think that is cool man.”

“You know the protocol.”

“I don’t see why there has to be a protocol.”

“What if I go straight from whatsapp to date?”

“The protocol’s trusted and tried mate.”

“People used to meet and start dating without having to go through that protocol some time back, remember?”

“Or if she’s like my soul mate or something.”

“Maybe we’ll meet and she’ll complete me and I’ll do the same for her and all that shiznit.”

“But damn man, if it does, it would be damn cool wouldn’t it?”

“Imagine telling your kids that’s how you met their mother.”

“And what does that make you? Barney?”

“Hey, I’m the one with the protocol and shit.”

“That’s a step away from the playbook. Of course I’m Barney.”

“Go and introduce yourself to the mother of your children.”

“May the force be with you.”

Suggested read: How to save face after sending a drunk text to an ex

B1 gets up from his table, takes a deep breath and turns around… to see himself staring at a family of four loudly gulping down their ice cream.

“What the hell?! When did she leave?”

(Hint: The answer’s in the title)

Tall. Dark. Handsome. At least in front of the mirror. I’m moved by an endless desire to not be bored. Stories make my heart race and my imagination soar, which is why you’ll find me reading, watching and listening to anything I can get my hands on. A solipsist by philosophy, the world for me is a dream and you may say I’m the dreamer.