” ‘Just be honest with Dr. Singh, okay? There’s no need to suffer.’ Which I’d argue is a fundamental misunderstanding of the human predicament, but okay.”

John Green is a magician. 6 years after The Fault In Our Stars, the legend brought us Turtles All The Way Down. It holds in it 6 years’ worth of longing, pain, happiness, and the correct amount of John Green.

There is something incredibly special about fiction. Unlike fantasy, fiction does not deal with the impossible. There might be a Hazel Grace in the basement of a church. A Jacobsen is probably unraveling clues as we speak. And, Aza, oh Aza Holmes lives in me. In the course of living through an illness, an incredible story of love, and adventure, I left a part of myself in each line. I will never be able to thank John enough for giving me this book. It may not be a cure for anxiety, but it is the warmth of your best friend’s shoulder on the worst of sleepless nights.

Suggested read: Here Are The Best Books Of 2018 That We Are Looking Forward To Reading

“At the time I first realized I might be fictional…”

What a wonderful line to begin a book with! The first paragraph usually sets the tone for the rest of the narrative. When I read this line I realized I would have my mind blown to smithereens in the course of these 286 pages. While reading the book, I put post-it tabs on pages with my favorite quotes. Needless to say, I have ended up with chunks of color on each page. While going over them, picking out my favorite parts to review, my heart is breaking yet again. It took me 4 hours to read Turtles All The Way Down by John Green, and 4 months later, I have still not recovered. Like everything the author stands for, this book doesn’t forget to be awesome. There is hope and heartbreak, friendship and fighting, life, loss, and things much greater than our hearts can carry. For a moment, I feared for the teenagers who would chance upon this in the Young Adult section. Then I realized that Aza Holmes is sixteen years old, and we are living on the brink of a nuclear apocalypse. What better time is there, to discard the facade of innocence?

“I was beginning to learn that your life is a story told about you, not one that you tell.”

Holmesy, as her best friend called her, thought she was fictional. Having realized that more than half of one’s body is made of bacteria, she wonders who the ruling party is. Aza consistently questions the authenticity of her existence – whether she is real, or “you’re doing the bidding of some parasite”. These intrusive thoughts happen to everybody. The sentences are framed differently, the scenarios are varied, but they are united in their tendency to flood your mind without invitation. “And then if you’re most people, you think, ‘Well, that was a weird thought’, and move on with your life. But for some people, the invasive can kind of take over, crowding out all the other thoughts until it’s the only one you’re able to have, the thought you’re perpetually either thinking or distracting yourself from.” Imagine walking through your entire life, being unable to believe that you really, truly, exist.

“The thing about a spiral is, if you follow it inward, it never actually ends. It just keeps tightening, infinitely.”

The cover-design reduces the complications of anxiety to a simple pattern: the thought-spiral. In Turtles All The Way Down by John Green, Aza Holmes is triggered by the possibility of C.diff. The Wikipedia tab of “human microbiobe” is a go-to for her. She can hear and feel the millions of bacteria thriving and dying inside of her. The more she thinks of it, the worse it gets. If you take the dust-jacket off, the book itself is hardbound in black. A perfect metaphor for anxious souls, don’t you think?

In a Reddit thread, a student of psychology wanted to recommend this book to her patients. Owing to the accurate portrayal of anxiety, this book, she felt, would benefit real-life patients. John Green had replied saying that the vivid details could also be quite triggering. There is a point in the book, towards the end, when Green traces an entire spiral. That means recording the words thrown back and forth for pages after pages. It is the most realistic depiction of a spiral that any book has ever captured.

While my blood pressure pumped through the roof at the end of that exchange, I was incredibly happy to have found a fellow comrade in Aza Holmes.

“One of the challenges with pain – physical or psychic – is that we can really only approach it through metaphor. It can’t be represented the way a table or a body can. In some ways, pain is the opposite of language.”

In the 25th July, 2017 edition of vlogbrothers, John discussed his OCD extensively.

“It seems to me that the stuff happening way down inside of us is difficult to talk about. Partly because those experiences aren’t really accessible by the senses. You can’t usually see or hear psychic pain. It is difficult to describe without simile or metaphor. I might say there is a void inside of me, or my insides are twisted, or like my brain is on fire. I can say what it’s like more than I can say what it is.”

Any form of mental illness is difficult to explain to people who aren’t patients themselves. Somehow there is a strong resistance against the ‘mental’, because it is abstract, intangible in form, and its symptoms are easily overlooked as ‘normal’. By locating this illness in a high school student, Green has made an interesting point. Mental illnesses do not abide by age restrictions. In the book, Aza’s mother, being the loving human being that mothers generally are, consistently labors to alleviate her pain. She frequently asks Aza about her mental health, not realizing that one hates being reminded of it often. The perfect illustration of the nitty-gritties of living with anxiety, is what makes this book so special. We desperately need people to understand how we feel, but we do not want them to equate everything we do with our illness. Being constantly asked if I am behaving the way I am because of my Depression is akin to stating that I cannot choose to be sad, or angry because of anything else. It is very similar to the anti-feminist “period” debate of “Are you PMS-ing?”, but with much less coverage.

“Maybe you are what you can’t not be.”

In some way, John Green is Aza Holmes. While the post-modern method of criticism refuses to allow me to draw parallels, I’d like to point out that I am merely repeating Green’s words here. It must have been a great struggle to nail the accurate depiction of a sixteen-year-old female protagonist. With some help from his agent, his wife, and friends, Green has done a great job of de-stereotyping what a teenager can amount to in the 21st century.

“I thought about him asking me if I’d ever been in love. It’s a weird phrase in English, ‘in’ love, like it’s a sea you drown in or a town you live in. You don’t get to be in anything else- in friendship or in anger or in hope. All you can be in is love.”

If the cover says John Green, you already know you have settled in for an unusual depiction of love. In this book too, Green does not hold back. He takes you on a galloping ride, up and down bouts of emotions. The thorns stick deeper this time around, because he romanticizes none of it. The mature bonding between Davis Pickett and Aza Holmes is harshly beautiful. As somebody with depression and anxiety, the non-idealistic portrayal of love has been a balm we have always longed for. It isn’t always smooth sailing, and whether or not we get to ride into the sunset with our beloved, you will not find out unless you read the book.

Suggested read: 30 Achingly Beautiful John Green Quotes For Those In Love With LOVE

Turtles All The Way Down by John Green, is incredibly beautiful. It will tear your heart to pieces, while you beg for more. Through the laughter, the tears, and all of reality, your fingers won’t stop reaching for the next page. To sum up the essence of everything that this masterpiece stands for, I would like to insert a part of the vlogbrothers episode from 3rd November, 2017:

“I was just in a terrible mood, and seemingly out of nowhere Amy started talking about how back in World War 1, all of these British soldiers who didn’t understand why they were being asked to fight and die for tiny patches of ground far from their home, started singing a song to the tune of that New Year’s Eve song ‘Auld Lang Syne’. They would sing, “We’re here, Because we’re here, Because we’re here.” It was this recursive lament, and acknowledgment that there was no “why”, that life in the trenches was meaninglessness all the way down. But that night in 2005, Amy completely transformed that song for me, without ever changing the words. Amy made me understand that we were here. Meaning that we were together, that even when we felt alone, we weren’t really, because we were part of this vast, and deeply interconnected ‘us’. And, also that we were here, even if only for a little while. And, maybe we’ll never know why we are here, but we can still proclaim and hope that we are here. That night Amy made me understand that hope is not foolish, or idealistic, or misguided. Hope is true. And I really believe that.” 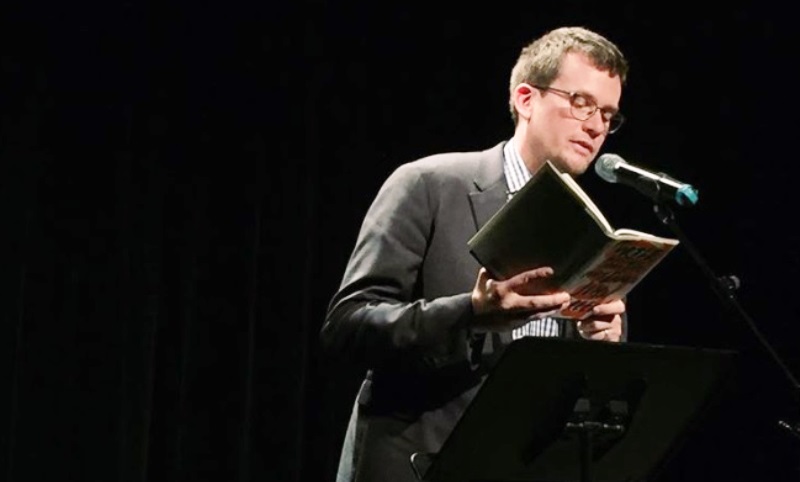