This turbulent, torrid ride of about 320 odd pages is what many deem a ‘wild, confused, disjointed, and improbable’ love saga- one that is a ‘compound of vulgar depravity and unnatural horrors.’ However, if what exists on those pages is so painful and disagreeable, why has Emily Brontë’s Wuthering Heights, the gothic tale of the all-consuming love between Heathcliff and Catherine Earnshaw on the Yorkshire moors, come to be the world’s most beloved romance of all times? No kidding. It’s several adaptations for the radio, television, theatre,  and the big screen along with its topping the polls and surveys conducted for favorite novels in the genre (such as the one carried out Andrew Davies season on UKTV Drama to mark a three-week celebration of Summer of Love) has revealed it to be the most eagerly devoured romantic novel of all times- leaving behind classics by Daphne du Maurier, DH Lawrence, and even her elder sister, Charlotte Brontë. 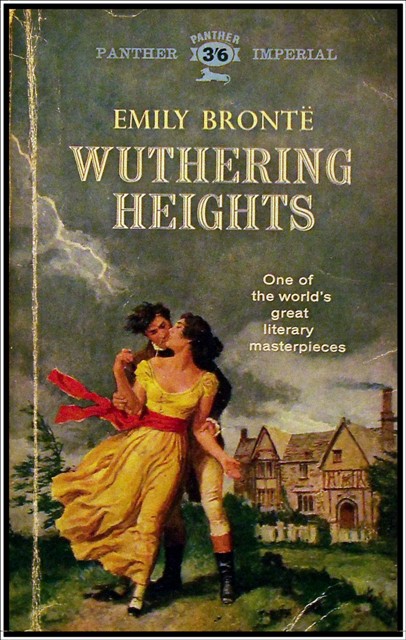 I remember my own personal experience with Emily Bronte’s tale of transgressive, forbidden love – my reading of Wuthering Heights being a tryst with the tempestuous journey that the central characters embark upon, a meandering pilgrimage toward the grim realm of the unrestrained forces in one’s nature- an undeniably powerful craving to let loose the stormy, undisciplined, unharnessed and untamed elements of one’s spirit animal, that’d otherwise be domesticated. And in that experiential voyage, I have decoded the answer to why Wuthering Heights shall remain the most passionate love story ever, a definitive response to why Wuthering Heights appeals to all its readers, why it casts a spell that has been unrelenting in its grip for over 200 years and shall always remain so.

And the answer, if I may be allowed, lies in a contemporary romance – a book whose place in the same genre is subject to a critical dialogue (and I might as well be on the don’t-like-it-so-much side) – but whose words perfectly capture the answer and so I quote, from Stephanie Meyer’s Twilight, a conversation between Bella Swann and Edward Cullen:

“I don’t understand why you like it. The characters are ghastly people who ruin each others’ lives. I don’t know how Heathcliff and Cathy ended up being ranked with couples like Romeo and Juliet or Elizabeth Bennet and Mr. Darcy. It isn’t a love story, it’s a hate story. … What is it that appeals to you?”

“I’m not sure,” I said, “I think it’s something about the inevitability. How nothing can keep them apart — not her selfishness, or his evil, or even death, in the end. . .”

…”I still think it would be a better story if either of them had one redeeming quality.”

“I think that may be the point,” I disagreed. “Their love is their only redeeming quality.”

And I know Bella is right about this. The all-consuming love and passion in which Heathcliff and Catherine are bound together does not merely evoke people’s fascination with a love story whose irresolution is as alluring as is the attraction between two people who, otherwise, have no ‘redeeming quality’ of their own, but also succeeds in becoming an archetype, a passionate longing to be whole, to give oneself unreservedly to another and in being all-in-all in each other, becoming a whole self for and in each other. In the chant of Catherine, ‘I am Heathcliff,‘ and in what has come to be one of the most oft-quoted quotes from the book,

“If all else perished, and he remained, I should still continue to be; and if all else remained, and he were annihilated, the universe would turn to a mighty stranger,“ one finds the same sentiment reverberating. 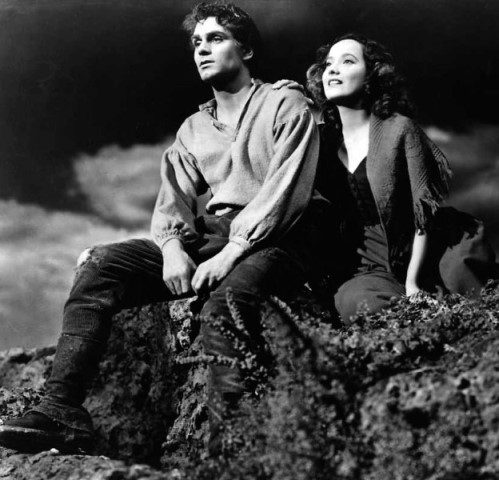 Laurence Olivier and Merle Oberon in the 1939 movie Wuthering Heights

Therefore, to view such an intense love for one’s other half, as it were, without whom one would cease to exist as anything but love, is what, in reality, would constitute what Charlotte Brontë, Emily’s elder sister deemed the book to be replete with – ‘perverted passion and passionate perversity!’ And just how this overturning of this negative early criticism the book has invited takes place, is delving deep into the lovers’ relationship in Wuthering Heights:

1. They are soul mates 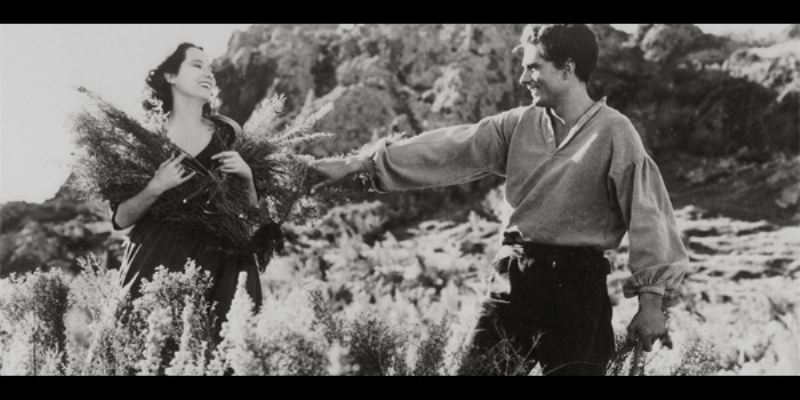 The kind of affinity with which they are drawn toward each other is a mysterious power of an alternate universe – a universe that is rightfully the realm of these two lovers – a universe that defies convention, rebels against the tenets that governs the one they inhabit, and has no qualms exhorting them to turn them on their head. This kind of force can only draw its life-energy from a connection that works beyond the realm of consciousness, beyond the realm of the superficial and material – a connection that is otherworldly, a connection that connects two soul mates. We see the two star-crossed lovers yearning for each other as if they were yearning for life. In fact, Heathcliff refers to Catherine as his soul innumerable times in the book. C. Day Lewis describes the lovers as “represent[ing] the essential isolation of the soul, the agony of two souls – or rather, shall we say? Two halves of a single soul – forever sundered and struggling to unite.”

2. Their relationship is their life-force

As opposed to the tame indulgence of Edgar Linton, the insipid sentimental languishing of Lockwood, the puppy love of Edgar and Cathy, and the romantic infatuation of Isabella, the grand passion of Catherine and Heathcliff thrives on the acceptance of the ‘impersonal element of personal existence.’ Hence, their relationship, unlike any other in the book (including the successful one of Cathy and Hareton) does not use personal terms to describe the feelings that rage within them. Theirs is a relationship that is conditioned by nothing save itself and hence, belies any attempt at containment. Their relationship is the all-sacred life force that refuses any attempt at being harnessed. In the face of these facts, it is interesting to note that their union happens only in death!

3. They create meaning through and with each other 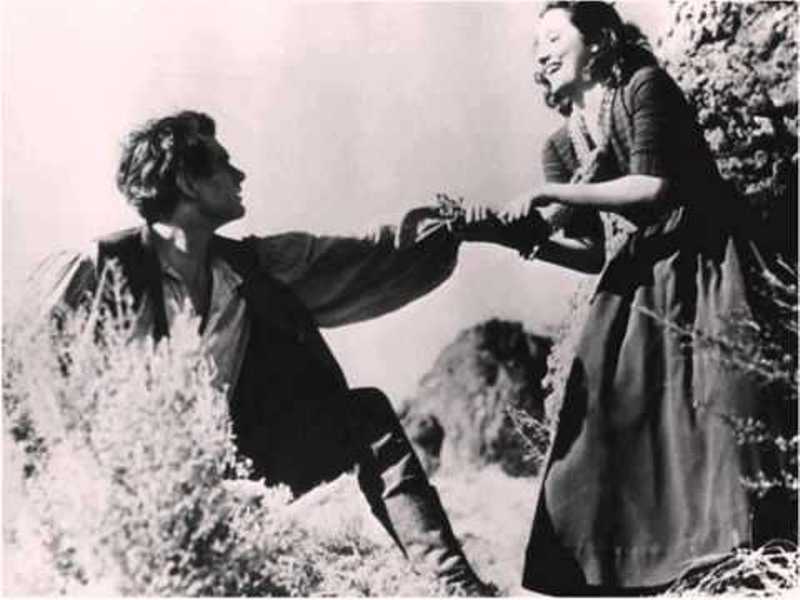 Another scene from the 1939 movie

The entire corpus of the novel is filled with Catherine and Heathcliff’s proclamations about the emptiness of the universe they inhabit, the futility of life, the meaninglessness of social institutions, and the void that fills other relationships – save for their relationship with each other. In doing so, not only are they evincing an ultimate and in a way, inevitable prophecy that the reader has deciphered all along, but also asserted the possibility of attaining a fulfilling existence, one with complete meaning in each other. Her vision of Heathcliff and her explanation to Nelly whilst she dies sums it up beautifully:

“I’m tired, tired of being enclosed here. I’m wearying to escape into that glorious world, and to be always there; not seeing it dimly through tears, and yearning for it through the walls of an aching heart; but really with it, and in it.”

4. In each other, they achieve a complete and unified whole 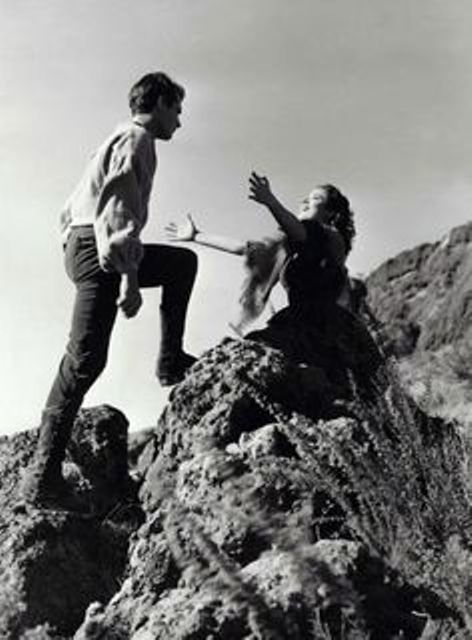 Another scene from the 1939 movie

In breaking free of the boundaries of a partial self and fusing with another to escape the inherent separateness of being, cease the agony of the human condition and achieve a new sense of identity in wholesomeness, they exemplify their ‘need’ for each other – a powerful force that could not and would not be thwarted. In fact, one of the most telling (and perhaps torrid and unnatural) examples in the book of such irresistible longing is Heathcliff’s determination to “absorb” Catherine’s corpse into his and for them to “dissolve” into each other so thoroughly that Edgar will not be able to distinguish Catherine from him. Freud has explained such a desire to be an integral element of ‘love.’

“At the height of being in love the boundary between ego and object threatens to melt away. Against all the evidence of his senses, a man who is in love declares ‘I’ and ‘you’ are one, and is prepared to behave as if it were a fact,” says Freud.

5. Their love is their own religion 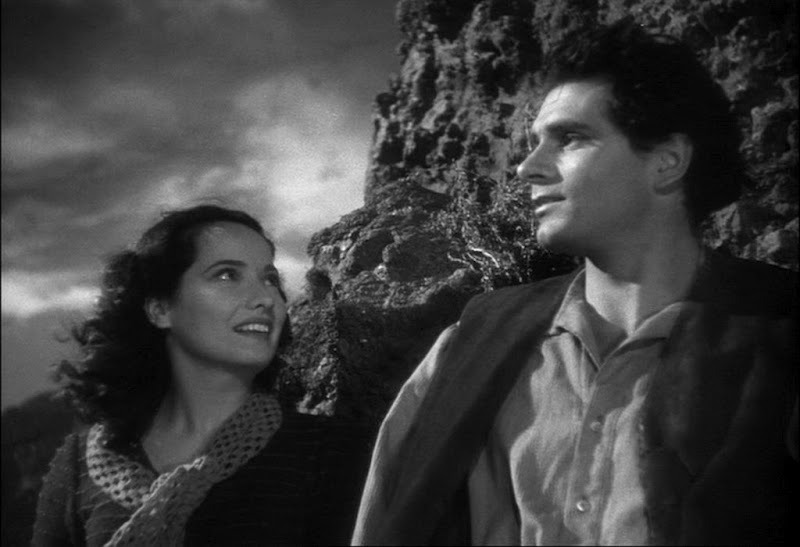 Heathcliff and Catherine in the movie

Religion, for aeons, has served as mankind’s shield against all fears (including that of death) and a tool of exhortation to be unafraid of becoming one with God. That Catherine and Heathcliff defy all earthly rules is a given, but that their rebellious nature serves to illuminate a streak of their own inexorable connection with the only deities in their universe – each other – is a stark example of the religious subtext that has perhaps baffled, even offended, and in the current age, delighted many. Their love has become their shield against the fear of death and the annihilation of personal identity or consciousness. Robert M. Polhemus sees Brontë’s religion of love as individualistic and capitalistic:

Wuthering Heights is filled with a religious urgency – unprecedented in British novels – to imagine a faith that might replace the old. Cathy’s “secret” is blasphemous, and Emily Brontë’s secret, in the novel, is the raging heresy that has become common in modern life: redemption, if it is possible, lies in personal desire, imaginative power, and love. Nobody else’s heaven is good enough. Echoing Cathy, Heathcliff says late in the book, “I have nearly attained my heaven; and that of others is altogether unvalued and uncoveted by me!” … The hope for salvation becomes a matter of eroticized private enterprise …

… Catherine and Heathcliff have faith in their vocation of being in love with one another … They both believe that they have their being in the other, as Christians, Jews, and Moslems believe that they have their being in God. Look at the mystical passion of these two: devotion to shared experience and intimacy with the other; willingness to suffer anything, up to, and including, death, for the sake of this connection; ecstatic expression; mutilation of both social custom and the flesh; and mania for self-transcendence through the other. That passion is a way of overcoming the threat of death and the separateness of existence. Their calling is to be the other; and that calling, mad and destructive as it sometimes seems, is religious.

As such, this tragic tale of love that finds its fulfillment in death sticks with me, as it does, I am sure with a million others – as a powerfully poignant tale of love that reverberates with a passion that grips you and never loosens the hold!

And if you still aren’t convinced, I can only dare you to pick the book, begin it and not finish it, and because I know you won’t be able to, exhort you toward the second part of my challenge – to lay it aside once you are done and wrestle that lump in your throat exerting the power of the universe to propel itself outward and frame words that are all about Wuthering Heights!

If you win, I will change my name to Kafayabala Kukununu, or maybe just tell you I did – well, you don’t know me! 😉

Article Name
Why Wuthering Heights Shall Remain The Most Passionate Love Story in Literature
Author
Sejal Parikh
Description
One of the most read classics of all times, Wuthering Heights, this one is a tale of an all-consuming love that refuses to let go, even in the arms of death.