Here’s Why Poetry Matters Now More Than Ever

No words in the English language can sum up the need for poetry more accurately than these spoken by the late Robin Williams in Dead Poet’s Society. Poetry can be defined as a language whose backbone is formed of thoughts, notions, emotions and experiences; whose muscles and nerves are built of words and blooded by analogies. Poetry can be defined as a painting that cannot be seen but felt instead. Poetry can be defined as truth in its Sunday clothes. Myriad poets have defined poetry in myriad terms, each version more beautiful than the other, but that’s the thing about poetry, it cannot be defined in mere words. Poetry is like art: It’s not cute or pretty or pleasant oftentimes. Poetry, like art, is meant make you feel something. Perhaps, this is why poetry matters– It makes you feel emotions in this materialistic world of ours.

“Here’s what our parents never taught us:

You will stay up on your rooftop until sunlight peels away the husk of the moon,
chainsmoking cigarettes and reading Baudelaire, and
you will learn that you only ever want to fall in love with someone
who will stay up to watch the sun rise with you.

You will fall in love with train rides, and sooner or later you will
realize that nowhere seems like home anymore.

A woman will kiss you and you’ll think her lips are two petals
rubbing against your mouth.

You will not tell anyone that you liked it.
It’s okay.
It is beautiful to love humans in a world where love is a metaphor for lust.”

This is how one marries language with a cacophony of emotions in this freestyle poem. This is how one makes you feel things you thought you weren’t capable of feeling. This is why poetry matters in an age where compassion is dead.

Suggested read: Phil Kaye Is The Dumbledore Of Spoken Word Poetry! Here’s Why

In a world full of routines and schedules where people are running around and racing against time to meet deadlines and catch the right buses, no one pays attention to the wind or the flowers or the rain or the little things that matter the most. Paul Simon, singer, songwriter and truest of terms, a poet, has talked about the rain in Kathy’s Song-

“I hear the drizzle of the rain,
like a memory it falls,
soft and warm, continuing
tapping on my roof and walls.”

Poetry is a medium of expression. A canvas for artistic sensibilities and creativity, an outlet for grief and pain. Dickinson personifies the wind as her visitor and makes a difference while she allegorically talks about her grief and isolation in this poem.

“His countenance a billow,
His fingers, if he pass,
Let go a music, as of tunes
Blown tremulous in glass.”

Poetry is usually birthed through a disturbed state of mind, even deteriorating mental health to release the emotional and mental turmoil lying within. Like they say, the more beautifully you write, the more terrible the inside of your mind must be. And no other poet depicts the workings of a neurotic mind more succinctly than Sylvia Plath in the Mad Girl’s Love Song-

“I fancied you’d return the way you said,
But I grow old and I forget your name.
(I think I made you up inside my head.)

I should have loved a thunderbird instead;
At least when spring comes they roar back again.
I shut my eyes and all the world drops dead.
(I think I made you up inside my head.)”

If we discuss button poetry, there’s an entire sub genre dedicated to mental health. Neil Hilborn describes being in love in the midst of his condition of obsessive compulsive disorder in the piece that went viral over the internet: OCD.

One cannot simply discuss poems expressing grief and mental health issues and not bring up Charles Bukowski. A seemingly arrogant drunkard who was not shy of using the most repulsive descriptions or swear words, Bukowski could create a certain brand of magic with words like few have been able to. Poetry brings out compassion and tenderness in us in the darkest of times.

“there’s a bluebird in my heart that
wants to get out
but I put whiskey on him and inhale
cigarette smoke
and the whores and the bartenders
and the grocery clerks
never know that
he’s
in there.

There is nothing more romantic than a poem, however. A song of the lovesick, the homesick and the one who has felt the bitter ache of existence. In one of his lesser known poems, Wordsworth talks about the love of his life, Lucy. The poem is about how few people knew her in her life and how she remained concealed from the masses. Nevertheless, there’s always that one person that affects you the most and Lucy was the one for Wordsworth who made all the difference in the world even for him.

“A violet by a mossy stone
Half hidden from the eye!
—Fair as a star, when only one
Is shining in the sky.

She lived unknown, and few could know
When Lucy ceased to be;
But she is in her grave, and, oh,
The difference to me! ”

History always varied upon who says it but poetry has also often been a source of facts telling us how things were for a certain part of mankind. Or sometimes history is made by certain poems. Samuel Taylor Coleridge described Xanadu, the palace of the Mongol emperor, Kubla Khan perhaps under the influence of opium in the hauntingly beautiful, Kubla Khan: Or, a vision in a dream. A Fragment.

“In Xanadu did Kubla Khan
A stately pleasure dome decree:
Where Alph, the sacred river, ran
Through caverns measureless to man
Down to a sunless sea.”

Poetry can be a form of revolution too. Back in 1959, Gwendolyn Brooks was inspired while walking in her community and coming across a pool half full of underage boys who weren’t attending school, she wondered how they felt about themselves instead of wondering why they weren’t at school. She captured the scene, turned it into the seven pool players at the Golden Shovel and a masterpiece was created:

“We real cool.
We left school.

We lurk late.
We strike straight.

We sing sin.
We thin gin.

We jazz June.
We die soon.”

However, there’s more to it than meets the eye. Materialism and consumerism may be the least of what is wrong with the world. There’s oppression, discrimination, abuse, corrupt legal systems and the worst enemy of makind: war.

During the romantic ages, poetry was meant for soothing the heart and enriching the soul. But in these troubled times, poetry has become the lone voice of truth. No longer poetry is adorned with flowery language, metaphors and allegory. It is flooded with a vicious imagery that pierces your heart and makes you realize what has become of the human race. Poetry is no longer recreation, it has become the medium through which heart wrenching facts are told and the truth is uncovered. Syria’s war has been depicted here by poet, Ghada Alatrash.

“When I am overcome with weakness, I bandage my heart with a woman’s patience in adversity. I bandage it with the upright posture of a Syrian woman who is not bent by bereavement, poverty, or displacement as she rises from the banquets of death and carries on shepherding life’s rituals.

I bandage it with veins whose warm blood has not yet been spilled on the surface of our sacred soil.

I bandage it with what was entrusted by our martyrs, with the conscience of the living, and with the image of a beautiful homeland envisioned by the eyes of the poor.

I bandage it with the outcry: “Death and not humiliation.”

The truth is being told in a way, it has never been said before and perhaps, this is why poetry matters now more than ever. 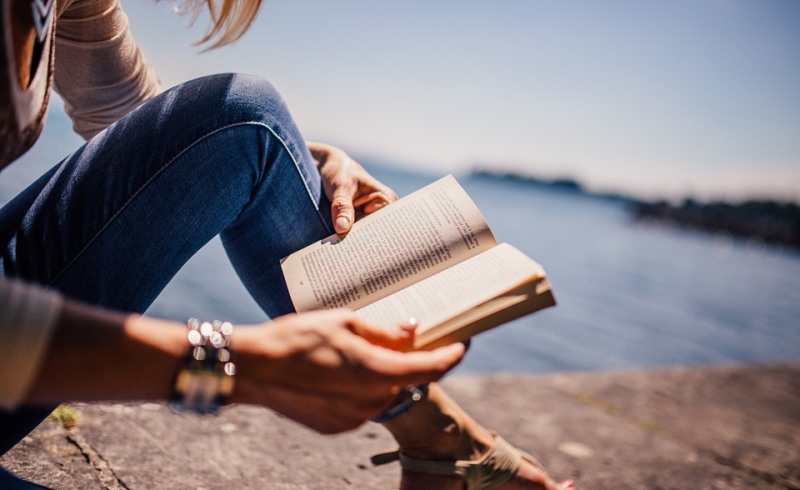 Article Name
Here's Why Poetry Matters
Author
Diksha Chakraborty
Description
Poetry is like art: It’s not cute or pretty or pleasant oftentimes. Poetry, like art, is meant make you feel something. Perhaps this is why poetry matters- It makes you feel emotions in this materialistic world of ours.