#ScienceSpeaks Period Pain Is ‘As Bad As Having A Heart Attack’

Only a woman knows how much pain she is in during her menstrual cycle. Millions of woman across the world can attest to this fact that period pain is not ‘just a cramp,’ or ‘lady pains,’ or ‘that which subsides with an ibuprofen.’

Despite so many women suffering from period pain almost every month, we don’t have many options when it comes to easing that pain. The best we can do is ingest some painkillers such as the aforementioned ibuprofen or paracetamol, or use hot watter bags/bottles to ease some of the worst of the pain. Nothing more can be done.

With science and technology making so many leaps and bounds in all other fields, why is there so little research done in this area that affects millions of women around the world? This question has a rather sexist answer that we’re forced to accept due to the decided lack of research into period pains – because it doesn’t affect MEN!

A professor of reproductive health at University College London, John Guillebaud, likens cramping and period pain to being as ‘bad as having a heart attack.’

Talking to Quartz, he said,

“Men don’t get it and it hasn’t been given the centrality it should have. I do believe it’s something that should be taken care of, like anything else in medicine.”

Primarily known as primary dysmenorrhea, period pain is debilitating and interferes with daily life of around one in five women, according to the American Academy of Family Physicians. And yet there’s little to no research on how to treat it.

“In general, there isn’t much research done into women’s health. I wouldn’t say dysmenorrhea has been hugely investigated.”

And when asked whether there would be more research were men affected by it, she said,

“I suspect there would be, being very cynical.”

Many women find it difficult to convince their doctors of the severity of their period pain, which is often dismissed as lady pains or the women exaggerating. Other women have had similar experiences with their doctors, who tell them to take painkillers and advice to use hot water bottles to ease the pain, while the issue might be that the women may be suffering from endometriosis.

In simple terms – although the pain of endometriosis is anything but simple – this is a secondary cause of period pain, and results when the tissue lining the uterus grows outside the womb, like on the fallopian tubes, ovaries, and pelvis. Sometimes this tissue growth has also been seen on the bladder and intestines. One of the most common symptoms of endometriosis is severe menstrual cramps, and if left untreated, it could cause infertility.

Talking about menstruation may not be taboo anymore, but it’s still not considered a serious enough issue to warrant dedicated research into treating it.

So the next time anyone dismisses your period pain as exaggeration or tells you to suck it up and go your work, you have legitimate proof that it’s as painful and bad as a having a heart attack. 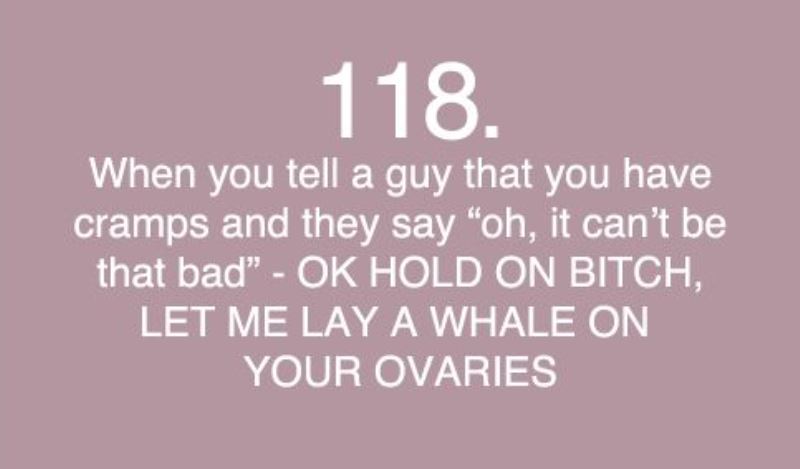