Being a woman has never been easy. What with the barrage of sexism, gender pay gap, discrimination, and overall social constraint, the female sex has had a weight tied around their neck all through their lives. However, we would like to believe that “the times they are a-changin’”, and for that due credit should be given to the trailblazers, the guiding stars fighting their way forward in order to give us a better tomorrow. Here are ten influential women 2018 was made memorable by:

Suggested read: In Support Of International Women’s Day : Here’s Why We Still Need It

She was handed the responsibility of building Buzzfeed India, when she all of twenty-two years old. Ever since then, she built an empire. Buzzfeed, and Dialogue- its subset- labors to provide quality entertainment, and works towards changing narratives. Jha resigned from her post as Editor-in-chief last year, handing the post over to an extremely competent Nirali Shah. Since then, Rega has toured beautiful places, advocated the supreme necessity of taking time out for one’s own self, mastered the art of journaling, and made thousands of people become better Feminists. Her book recommendations are always ones that shake your roots. A writer with a golden voice, Rega Jha is a responsible influencer. She is one of my favorites in the influential women 2018 category.

AOC is an American politician and activist. In her first ever speech on the House Floor, she refuted Trump’s controversial governmental shutdown over the Mexico wall, by saying, “The truth is, this shutdown is about the erosion of American democracy and the subversion of our most basic governmental norms. It is not normal to hold 800,000 workers’ paychecks hostage.” In a country that has historically resisted the governance of women, putting her foot down on strong issues is a risky endeavor- albeit one which AOC does with courage and style. Her ‘Green New Deal’ resolution seeks to stabilize global warming, under a President who denies the very existence of it. She even went so far as to assert that it is a “legitimate question” to ask whether it’s moral for people to have children with the looming threat of climate change. In a group dominated by orthodoxy, it is refreshing to see a fresh new perspective; the true representation of the youth and changing times.

Williams has been a lasting influence on all minds, for decades. While she is often hailed as the guiding light for young black athletes, she transcends all barriers to become a beacon of womanhood itself. In the 2018 US Open, the lauded athlete raised an important debate over gender discrimination is sports. She was fined for an offence which, in the case of male tennis players, is easily overlooked. If we show emotion, we’re dramatic. Serena narrated the new Nike ad, which aired during the Oscars 2019. It is a perfect embodiment of everything she has always stood for- “If we want to play against men, we’re nuts…And if we get angry, we’re hysterical, irrational, or just being crazy….A woman competing in a hijab; changing her sport; landing a double-cork 1080; or winning 23 grand slams, having a baby, and then coming back for more, crazy, crazy, crazy, and crazy. So, if they want to call you crazy, fine. Show them what crazy can do.”

A commoner who became royalty, Markle always sparked the vibe of a queen. Biracial American, now former actress, divorcée, and United Nations women’s advocate, Markle has faced a lot of flak owing to the media’s need to thrive on sensationalism. All her moves are minutely tracked by the paparazzi, waiting for a scandal to break out. Her family history, and her relationship with her parents have been distorted beyond bounds, and sold to the public. However, the duchess continues to handle all of this negativity with grace. As Priyanka Chopra rightfully pointed at Wendy Williams’ talk show, Markle has always been much more than just Prince Harry’s girlfriend (now wife). She was an 11-year-old elementary school student when she turned her focus to gender equality. As an “Advocate for Political Participation and Leadership” for the women’s agency of the United Nations, she has put a global spotlight on the need for bridging gender division.

Actress and activist, Jamil is a force to reckon with. Popularly known for her role as Tahani Al-Jamil, in NBC’s The Good Place, Jameela has repeatedly lent her voice to secure a safe environment for young girls. Addressing Avon’s controversial anti-cellulite campaign ‘Every Body Is Beautiful’, Jameela wrote, “Every body is beautiful, unless they have any “flaws” I guess. What a gross abuse of the body positive movement. I want you all to look out for this constant manipulation. Once you see it, you can’t unsee it.” She even “made a petition to try to stop celebrity endorsement of pseudo-science detox/diet products that can be harmful to your health, and can encourage disordered eating.” Having survived toxic food patterns as a teenager, Jamil perseveres to rubbish the unhealthy influence young girls are exposed to.

In June 2018, Netflix released a video of Gadsby’s comedy special, ‘Nanette’. It took the world by storm with its groundbreaking narrative and storytelling. She earned a legendary status through her easy explanation of how sexual assaulters cannot be hailed as artists; how one does not have to be loud in order to be authentically gay; how divisiveness based on gender is a dangerous thing. Gadsby’s story will be remembered for generations to come. Her art degree and her ‘Rennaissance Women’ skits add layers to her personality. She has two dogs, and a mind that could make and break the apocalypse. After Gadsby, the world of comedy has developed a post-Nanette style, visible in Vir Das’ ‘Losing It’. Comedy has become more conscious, as have the viewers. As she said, “There is nothing stronger than a broken woman who has rebuilt herself.”

Krishna Kumari submitted her nomination for the Pakistani Senate (Upper House of Parliament) in February, 2018. This very act is a strong indicator of the young generation growing up with more ambition and less orthodoxy. Hailing from a minority tribe, and a rural area, her family was tied to bonded labor for several years. She was a grade three student when she was held captive along with her family in a private jail owned by the landlord of Kunri of Umerkot district. She went on to pursue her studies later in life, and completed her Masters in Sociology from Sindh University. As a human rights activist, she is a beacon of hope. Kumari is the first Dalit woman Senator ever elected in Pakistan. This serves as a major milestone for women and minority rights.

Paul is a 20-year-old art illustrator. She writes poetry, and works insanely hard to dispell gender norms. During the #MeToo wave in India, she was outspoken and active in trying to do what was right. She went so far as to take her work off Taxi Fabric, when their co-found Sanket Avlani was accused of sexual assault. Some of her famous artworks include “Tumhare paas maa hai, hamare paas stigma hai” which aims at transgender inclusion, and her Goddess series. Recently, her collaboration with Rushil Bhatnagar produced the praiseworthy ‘BedxTalks’, a zine that speaks freely about Sex Education. On her Instagram page (@artwhoring), she perseveres to promote body positivity, denounces censorship, upholds the tenets of freelancing work ethics, and leads with all the power of a zeitgeist.

Her instagram (@marcelailustra) has 37.7k followers presently, whose lives, I promise, are much the better for it. The twenty-six years old Brazilian illustrator uses her art to talk about mental health. She writes, “… I was diagnosed with Panic Syndrome. I stopped everything to re-evaluate my life and by doing therapy, I ended up reconnecting with my artistic side. With time I was evolving and I started to dedicate myself only to my illustrations. Today my work is dedicated to the feminine universe: I speak a lot about self-esteem, body acceptance and mental health.” Her illustrations do not shy away from what society calls “body flaws”. Cellulite, pubic hair, acne, facial hair, her illustrations do not shy away from anything real. Her work is meant to scandalize the toxic and shower love and warmth on those who have lost their way.

2018 left the world speechless with the way it turned the tables. Be it Hollywood responding against the inhuman popularity of a repeat sexual offender (Harvey Weinstein), or women across platforms in India calling out workplace harassment, it was a year of women claiming what truly belongs to them. I have not listed individual names because there are too many strong women to list, and also because none of them brought about the movement in isolation. Courageous women across the world worked as a team to sucker punch sexism, gender discrimination, and sexual harassment. They are the most heartbreaking, and the most respectable in the influential women 2018 category.

Suggested read: Everything You Need To Know About The International Women’s Day 2019 Theme 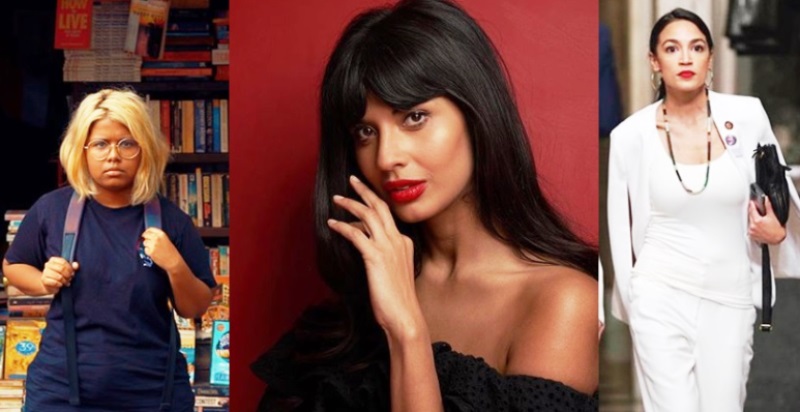 Article Name
Influential Women 2018: Here Are The Women We Should Be Celebrating This International Women's Day
Author
Meghalee Mitra
Description
2018 left the world speechless with the way it turned the tables. Here are ten influential women 2018 was made memorable by.