Here’s Celebrating Some Of The Best Poems By Natasha Trethewey

Natasha Trethewey is an American poet who was appointed United States Poet Laureate in 2012 and again in 2014. She won the 2007 Pulitzer Prize in Poetry for her 2006 collection Native Guard, and she is a former Poet Laureate of Mississippi.

In today’s #NaPoWriMo post, we will be celebrating some of the best poems by Natasha Trethewey. We hope you will enjoy reading them just as much as I did curating them for you.

All week she’s cleaned
someone else’s house,
stared down her own face
in the shine of copper–
bottomed pots, polished
wood, toilets she’d pull
the lid to–that look saying

But Sunday mornings are hers–
church clothes starched
and hanging, a record spinning
on the console, the whole house
dancing. She raises the shades,
washes the rooms in light,
buckets of water, Octagon soap.

Cleanliness is next to godliness …

Windows and doors flung wide,
curtains two-stepping
forward and back, neck bones
bumping in the pot, a choir
of clothes clapping on the line.

Nearer my God to Thee …

She beats time on the rugs,
blows dust from the broom
like dandelion spores, each one
a wish for something better.

Here, she said, put this on your head.
She handed me a hat.
you ’bout as white as your dad,
and you gone stay like that.
Aunt Sugar rolled her nylons down
around each bony ankle,
and I rolled down my white knee socks
letting my thin legs dangle,
circling them just above water
and silver backs of minnows
flitting here then there between
the sun spots and the shadows.
This is how you hold the pole
to cast the line out straight.
Now put that worm on your hook,
throw it out and wait.
She sat spitting tobacco juice
into a coffee cup.
Hunkered down when she felt the bite,
jerked the pole straight up
reeling and tugging hard at the fish
that wriggled and tried to fight back.
A flounder, she said, and you can tell
’cause one of its sides is black.
The other is white, she said.
It landed with a thump.
I stood there watching that fish flip-flop,
switch sides with every jump.

Four weeks have passed since I left, and still
I must write to you of no work. I’ve worn down
the soles and walked through the tightness
of my new shoes calling upon the merchants,
their offices bustling. All the while I kept thinking
my plain English and good writing would secure
for me some modest position Though I dress each day
in my best, hands covered with the lace gloves
you crocheted- no one needs a girl. How flat
the word sounds, and heavy. My purse thins.
I spend foolishly to make an appearance of quiet
industry, to mask the desperation that tightens
my throat. I sit watching-

though I pretend not to notice- the dark maids
ambling by with their white charges. Do I deceive
anyone? Were they to see my hands, brown
as your dear face, they’d know I’m not quite
what I pretend to be. I walk these streets
a white woman, or so I think, until I catch the eyes
of some stranger upon me, and I must lower mine,
a negress again. There are enough things here
to remind me who I am. Mules lumbering through
the crowded streets send me into reverie, their footfall
the sound of a pointer and chalk hitting the blackboard
at school, only louder. Then there are women, clicking
their tongues in conversation, carrying their loads
on their heads. Their husky voices, the wash pots
and irons of the laundresses call to me.

I thought not to do the work I once did, back bending
and domestic; my schooling a gift- even those half days
at picking time, listening to Miss J- . How
I’d come to know words, the recitations I practiced
to sound like her, lilting, my sentences curling up
or trailing off at the ends. I read my books until
I nearly broke their spines, and in the cotton field,
I repeated whole sections I’d learned by heart,
spelling each word in my head to make a picture
I could see, as well as a weight I could feel
in my mouth. So now, even as I write this
and think of you at home, Goodbye

is the waving map of your palm, is
a stone on my tongue.

In 1965 my parents broke two laws of Mississippi;
they went to Ohio to marry, returned to Mississippi.

They crossed the river into Cincinnati, a city whose name
begins with a sound like sin, the sound of wrong—mis in Mississippi.

A year later they moved to Canada, followed a route the same
as slaves, the train slicing the white glaze of winter, leaving Mississippi.

Faulkner’s Joe Christmas was born in winter, like Jesus, given his name
for the day he was left at the orphanage, his race unknown in Mississippi.

My father was reading War and Peace when he gave me my name.
I was born near Easter, 1966, in Mississippi.

When I turned 33 my father said, It’s your Jesus year—you’re the same
age he was when he died. It was spring, the hills green in Mississippi.

I know more than Joe Christmas did. Natasha is a Russian name—
though I’m not; it means Christmas child, even in Mississippi.

Here, the Mississippi carved its mud-dark path,
a graveyard for skeletons of sunken riverboats.
Here, the river changed its course,
turning away from the city as one turns,
forgetting, from the past— the abandoned bluffs,
land sloping up above the river’s bend—
where now the Yazoo fills the Mississippi’s empty bed.
Here, the dead stand up in stone, white marble,
on Confederate Avenue.
I stand on ground once hollowed by a web of caves;
they must have seemed like catacombs,
in 1863, to the woman sitting in her parlor,
candlelit, underground.
I can see her listening to shells explode,
writing herself into history,
asking what is to become of all the living things
in this place? This whole city is a grave.
Every spring— Pilgrimage—the living
come to mingle with the dead,
brush against their cold shoulders
in the long hallways, listen all night to their silence
and indifference, relive their dying on the green battlefield.
At the museum, we marvel at their clothes
preserved under glass—so much smaller than our own,
as if those who wore them were only children.
We sleep in their beds, the old mansions
hunkered on the bluffs, draped in
flowers—funereal—a blur of
petals against the river’s gray.
The brochure in my room calls
this living history. The brass plate on
the door reads Prissy’s Room.
A window frames the river’s crawl
toward the Gulf. In my dream,
the ghost of history lies down
beside me, rolls over,
pins me beneath a heavy arm.

What’s left is footage:
the hours before Camille,
1969—hurricane parties,
palm trees leaning in the wind,
fronds blown back, a woman’s hair.
Then after: the vacant lots,
boats washed ashore,
a swamp where graves had been.
I recall how we huddled
all night in our small house,
moving between rooms,
emptying pots filled with rain.
The next day, our house
on its cinderblocks—seemed
to float in the flooded yard:
no foundation beneath us,
nothing I could see tying
us to the land. In the water,
our reflection trembled,
disappeared when I bent
to touch it.

This is all we have on today’s post on the Best Poems by Natasha Trethewey. This is, however, not an exhaustive list, and if we have missed out on some of your favorites, then please feel free to add them in the comment section below. 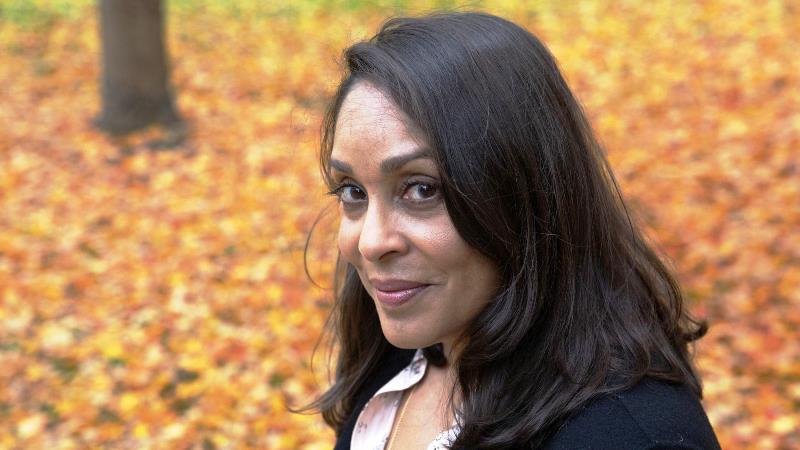