Tinder Reveals The Most Swiped-Right Men And Women Undergrads

Love it or hate it, Tinder dating app is here to stay. And now, the hookup-app-masquerading-as-a-dating-app, has come out with a list of most appealing undergraduate men and women in the US. And who’s at the top of this list, do you think? Women from Florida State University and men from Georgetown University. 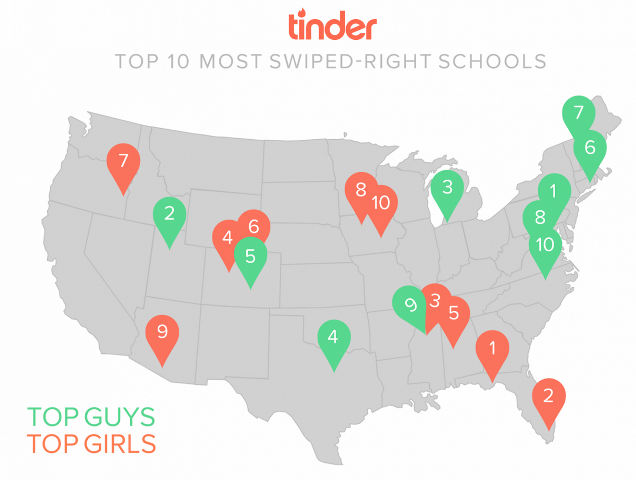 Tinder dating app on Wednesday, released its list of campuses whose undergrads are, in its own words, the Most Swiped Right. Based on the ratio of right swipes that the undergrads received within the app, Tinder came up with the list. All the students ranked were in the age group 18-23, who’re attending these universities in the spring of 2015.

As such, the list of Most Swiped-Right men and women has some interesting insights to offer:

Check out the top 25 lists for most appealing men and women undergrads below:

Campuses with Most Swiped-Right Men:

Campuses with Most Swiped-Right Women:

Article Name
Tinder: Most Swiped-Right Men From Georgetown, Women From Florida State
Author
Chaitra Ramalingegowda
Description
Tinder revealed a list of most-swiped right men and women, according to which, Georgetown and Florida State top the list for men and women respectively.