#AstroSpeak What Type Of Drunk Are You, Based On Your Zodiac Sign

If you have ever been around a group of people with access to alcohol (and if you are reading this article, then chances are, that you have) then you would know that drunken people are their very own species. Within that species, there are different kinds of people who behave different when their system is exposed to alcohol. Did you know, however, that you could find out what type of drunk are you based on your zodiac sign?

Suggested read: #AstroSpeak What To Be For Halloween According To Your Zodiac Sign

Now don’t be mistaken, I am not about to attribute random qualities to random signs. Your zodiac signs have a much more significant effect on who you are as a person. It determines your decisions and your personality, which includes situations where you might or might not be drunk. Different zodiac signs have a different way of dealing with their alcohol, and it is useful to know which category you fall under! So hold on to your seatbelts, and find out what type of drunk are you, based on your zodiac sign!

Aries is considered the first sign on the zodiac spectrum, which makes them automatic leaders and initiators. They are the life of the party, and when an Aries get drunk, you can expect them to either go big, or go home, since there is no half-hearted middle path for them. They are wild ones, who don’t hold back when they are drunk, and become brutally honest, sometimes with disastrous results.

If you have ever encountered a friend who seems to lose their filters when alcohol enters their body, then it is likely that that person is an Aries. This can be both a strength and a weakness. Even though Aries are usually the one who start the party, they never know how to end it, because often, they overestimate their limits and end up looking a tad embarrassing because of their loud mouth drunkenness.

People born under the Taurus sign are a generally fun-loving bunch, and they certainly know how to love their alcohol. You can be classified as the smiley drunk, who can’t seem to stop giggling, whether you have multiple shots or simply downed a beer. Because your friends love you so much, they love getting drunk with you because you are extra fun to be with.

However, your friends also are with you because they love you and don’t mind cleaning up after you, because in your delirious joy and drunkenness, you lose coordination in your limbs completely. You are like an elephant in a room that cannot be tamed, as you usually end up spilling something, injuring someone, or breaking something.

In general Geminis are the introvert kind that don’t really like talking to people. However, if you manage to get a little alcohol in them, they become the super chatty kind that you end up sharing all your life’s secrets with. They tend to get super sentimental (although not enough to start the waterworks) and are excellent advice givers, but only when they are sufficiently drunk.

Your super chatty behavior might also lead to a massive hangover and more than an couple of regrets the day after, because these are usually things you would not have said to people otherwise. However, you are smart, and you know how to keep a situation in check, which ensures that you do the same things and repeat the same mistakes the next time you get drunk.

People who are born under the star of Cancer truly love their alcohol. However, for them, drinking is a community experience, because they aren’t really good at controlling themselves when under the influence. They become super flirty, and it is difficult for them to say no to anything. They become instantaneous brave hearts and are up for any kind of adventure – whether it is a one night stand with a rando, or mixing drinks.

They usually tend to wake up with a massive hangover, or major regrets, but either way, they know how to have a good time.

If there is one thing that describes Leos, then that is their passion, their determination, and their ability to enjoy themselves. They usually tend to become the flirty kind of drunk, where they decide it is time to hit on everyone, starting from their friends, to the bouncers and the bartenders. That being said, Leos are generally goo d at handling their alcohol, and prefer to dance the booze away and have the time of their lives, instead of succumb to the lethargy.

Suggested read: #AstroSpeak Do You Find It Tough To Stay In Touch, Based On Your Zodiac Sign

Virgos are the expert drunkards here. There general is very calm and collected, and they are introverts, which means it is difficult to read them, whether they are drunk or sober. Unlike Geminis, they do not expose their heart and soul when they are drunk, and can in fact, take their alcohol really nicely.

They prefer chilling in the house, and getting drunk at intimate parties, rather in bars and public places, where the going can get pretty intense. They tend to engage in whispered conversations a lot, and might even get slightly philosophical under the influence. All in all, they are pretty good company when they are drunk.

Libras make for the out of control kind of drunks. They don’t know what their limit is, and most of them are sort of immune to the effects of alcohol initially, which makes it even more difficult to stop yourself from going on drinking. Their balanced nature makes them cautious and careful however, which means they tend to indulge themselves in controlled environments, and even if they go out, they like to have close company with them in case things get bad. However, that being said, they are pretty bad at knowing when to stop, which leads to several passing out and throwing up stories.

Scorpios are born under the planets of Venus and Mars, which makes them super impulsive, whether they are drunk or not. However, drinking helps ease your inhibitions any way, which makes Scorpios even more susceptible to impulsive decisions and recklessness when you are drunk. Scorpios are the most likely to spin out of control, and become super offensive.

Like Aries, Scorpios too have trouble exercising their filters when they are under the influence. They tend to become bitter and sarcastic and brutally honest, sometimes unnecessarily so. They are the sassy, funny kind of drunks that everyone likes having around, till they start getting offensive

Sagittarius people are intensely creative in real life, and are always looking for adventure. They are the kind of people who are the first to reach the dance floor, the first to start the party, and the last to leave. They are up for all kinds of ambitious drinking games, and you might even find them inventing a few if you are lucky.

They are probably the best kind of drunks because they know how to handle their alcohol, and they know their limits. If you are planning to enjoy a quiet evening of drinking with little or no activity, then it is unlikely that you will find a Sagittarius in your company.

Capricorns are creatures of the earth, and in all matter, including drinking, they are super grounded. No one knows their limits better than a Capricorn, and you will never find one of them wasted. They are headstrong and in control, and don’t drink in random places with random people. They are constantly surrounded with their closest friends, and are often the ones who take care of their wasted friends when they have had too much to drink. They are the best kind of people to get drunk with, because they are as good as sober, and will never judge others for getting drunk, while being completely in control themselves.

The sign of the Aquarius is that of water. Their element is that of water. Therefore, it is only likely that their drinking style will have a certain level of fluids involved- in the form of vomit. An Aquarius is that friend that you hold while they are throwing up on the sidewalk before half the night is over. They are the sloshed type, who are out, even if they down a couple of shots.

However, the good thing about Aquarius is that they tend to get very charming and chatty when they are drunk, provided they know when to stop, if they have a light buzz, they can be great conversationalists, and can soon become the life of the party.

Suggested read: #AstroSpeak What Kind Of Parent Are You, According To Your Zodiac Sign

Pisces is the drunk friend that we all have. They are the ones who are all about the waterworks when they tend to get drunk. There is limit to their sadness, and whether they have a reason to their crying or not, you can expect a box of tissues to be exhausted when a Pisces is drunk crying.

They alcohol tolerance is rather low, which makes them very emotional, very fast, and depending on who is with them, it can get quite difficult to handle them. In their state, they are the most likely to drunk call off-limit people (LIKE THEIR EX) and make a general mess with their river of tears.

Let us know whether your zodiac was able to accurately guess what type of drunk are you! 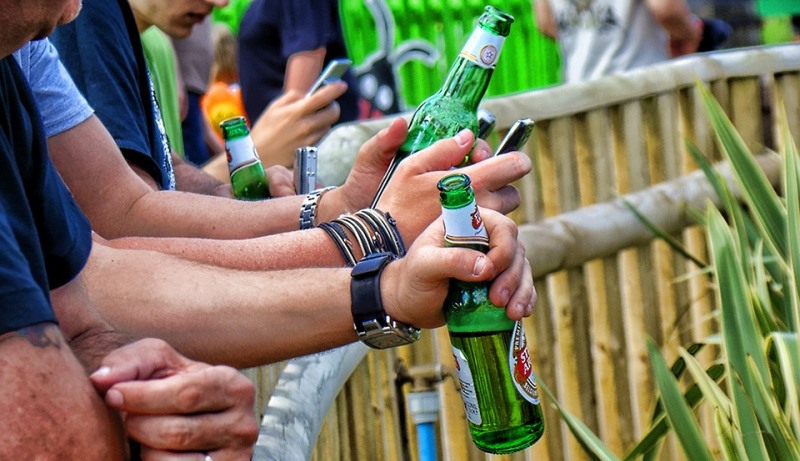 Article Name
What Type Of Drunk Are You, Based On Your Zodiac Sign
Author
Aishani Laha
Description
Everyone behaves differently when they are drunk. Have you ever wondered what kind of drunk are you? Here are the answers based on your zodiac sign!