#ScienceSpeaks Your Parents Do Have A Favorite Child, Despite What They Say

Whether you want to acknowledge it or not, there’s a family favorite. Your younger brother got away with breaking that vase that was passed down through three generations, or your older sister was the star athlete while you had to slog twice as hard just to make it to the top. Even if this isn’t true, it sure did seem that way, doesn’t it? And your parents have always, ALWAYS insisted that they treat you and your siblings equally.

But Science says that it’s not true at all, and that parents totally have a favorite child!

Firstborns tended to feel preferred, because they were the only children till their siblings came along. Once that happened, their status as the oldest child made them the first in the family to shine in sports, lead the way academically, and generally put their parents in a conundrum about what to do and how to deal with them. Eldest children led by example, and this was a boon for the parents who now had a better ideas how to handle their younger children once they too reached similar age. Unfortunately, this also meant that parents knew what to expect and tended to get a little tougher – at least, that’s what the dominant thinking is.

Younger siblings felt that they could sense the firstborn bias and that it affected their self-esteem.

The research team then asked the siblings’ parents for their take on the issue. Although parents refused to admit having preferred one child over the other, 74 percent of mothers and 70 percent of fathers confessed to researchers that they definitely liked one child better than the others and had indeed showered preferential treatment over that child.

However, the parents didn’t let on which child they preferred. So Conger and her team had a theory about who felt this preferential treatment the most. She said,

“Our working hypothesis was that older, earlier born children would be more affected by perceptions of differential treatment due to their status as older child – more power due to age and size, more time with parents – in the family.”

The research also concluded that no matter what their birth order, every single child was suspicious of their parents favoring others over them.

“Everyone feels their brother or sister is getting a better deal,” noted Conger.

Do you feel vindicated with the findings of this study that your parents have a favorite child? Do you think your parents dole out preferential treatment to your siblings and not you? Share your sibling woes with us in the comments section below. You are not alone! 😛 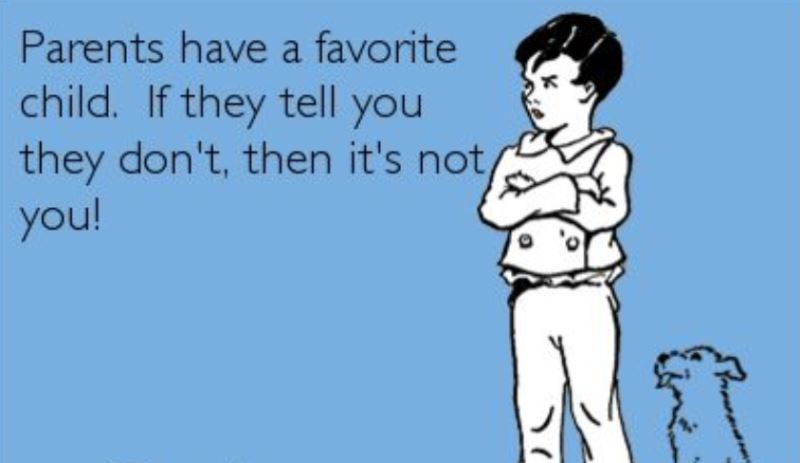