9 ‘Facts’ About Depression That Are As Mythical As Unicorns & Werewolves!

“I didn’t want to wake up. I was having a much better time asleep. And that’s really sad.” – Ned Vizzini (It’s Kind of a Funny Story)

“Is depression all in your head?”

These are two of the most Google-ed questions on depression.

The World Health Organization (WHO) updated their 2017 Fact Sheet to state,

“Globally, more than 300 million people of all ages suffer from depression. It is the leading cause of disability worldwide, and is a major contributor to the overall burden of disease.”

In a world largely affected by it, you would think the population had sufficient education on the subject. Turns out, I’m wrong.

Suggested read: Why an ‘okay’ day isn’t always what it seems for someone with depression

Here are some facts about depression that are mythical, at best.

“It’s just another word for sadness”

This is perhaps the most common misconception. Too many people confuse the two. Not to belittle anybody’s grief, but depression is significantly harder to “snap out of”. Having said that, they are definitely co-related. Sadness can trigger depression. Depression can cause one to be sad. But they’re far from same. Take this situation, for example: All human beings live on Earth. However, not everything that ‘lives’ on Earth is a human being.

“Sadness is a normal human emotion. Depression is an abnormal emotional state.”

It does not inspire the same behavioral abnormality in everybody. Person A might be more prone to violence, while Person B can barely will himself to get out of bed. It treats (destroys) every person carefully and with utmost care. If Depression was on Tinder, it would have 10/10 right-swipes!

Very often, patients of depression are greeted with, “But why are you depressed?” Honestly, I wish I knew.  I fell into depression the way you fall asleep. Slowly, and then all at once. (Brownie points, if you spotted the John Green reference!) Depression doesn’t come with a ‘why’ or ‘how’. It mostly arrives as a ‘what the fuck’. If it had a source, it would be easier to find a cure.

Now for the social ostracism. I’ve overheard discussions along the lines of: “He’s so rich. What does he have to be depressed for?”, or “My financial state is so much worse, yet I manage to be happier.” Firstly, grief is not a competition. Your strength to make it through troubling times, is absolutely inspirational. But it does not give you a green card to belittle somebody who could not. Imagine this: You survived a house-fire, while your neighbor couldn’t. Would you send postcards to their family saying ‘Boo you, I won.’? No? Well, it isn’t any different when it comes to a mental disaster.

Secondly, depression isn’t directly proportional to your assets. That is one more thing money cannot buy. Deepika Padukone, a famous Bollywood actress, came to the forefront with stories of battling depression. It surprised a lot of people that anybody that ‘well-off’ could succumb to this.

So, you see, Depression doesn’t choose its victims based on class or creed. Neither does it pick you based on your skin color.

“Triggers only exist in movies”

“Triggers are overrated,” “That’s a very rich-people concept,” “Are you a Tarantino movie or what?,” etc., Triggers exist. Neil Gaiman, in Trigger Warning, wrote of a lady who was triggered by ‘tentacles’. Here’s an easy way to explain triggers: Remember the playlist you and your ex would listen to? Chances are, whenever those songs play, it reminds you of him.

My grandmother’s room reminds me of her. Sometimes, it’s a pleasant memory. We’d play ‘Antakshari’ on the phone before I went to bed. Every weekend, I’d listen to her tell stories. She would lull me to sleep in that room. Often, this makes me calm and happy. On other occasions, I’m reminded of her absence. The gnawing feeling in my stomach returns. So, I generally keep myself from looking at her room, when I pass by.

Triggers are very real. Especially for a depression patient, since it never stops at temporary sadness. A small trigger could potentially ruin several months of your life. So, if you start watching a movie and it makes you feel bad, stop right there. If s song, or smell, pulls you back to a bad part of your life, exit immediately. 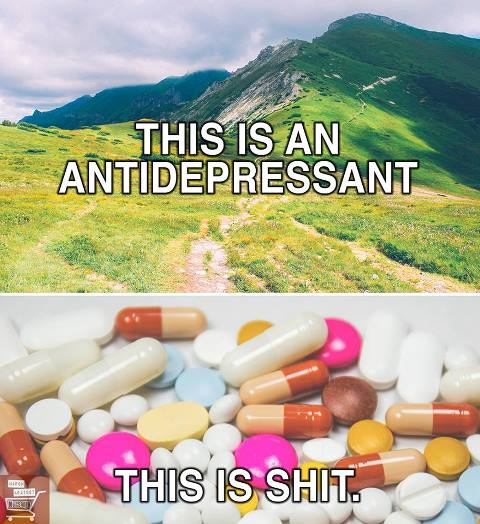 Several forums, including meme-pages, advocate the belief that solely Nature cures your mind. Now, Wordsworth may benefit from this ideology, but you hardly will. If you suggested mountain-climbing as a remedy for period pain, I’d be writing your epitaph by now. Mental disorders are no different, and require proper timely treatment. This is the most important among the facts about depression.

Not every patient has the same needs. Some benefit more from counseling than medicine. But treatment, irrespective of its kind, is mandatory. Replace Depression with Cancer, and not a single troll would make fun of chemotherapy. That’s because they know Cancer is real. It’s high time we realize that so is Depression.

Several patients give up on pills very early in the process. The most common complaint is that it takes too much time. It does. A lot of patients report results within two weeks. But in most cases, it takes at least 7-8 weeks before positive results are recorded. Depression is a little more complicated than the common cold, and so is the medical procedure. It takes several trials to prescribe the correct medicine with the dosage suited to the patient. Hang on, it will be worth it.

“Depression must be inherited”

This isn’t a hard and fast rule. Previous studies strongly propagate this idea, but newer studies have challenged it. Not everybody with a family history of depression will inherit it, even though some will. Studies suggest that the latter comprise 10 to 15 percent. As HuffingtonPost clearly states, Depression lacks a “one size fits all” theory.

The internet is a confused place. Men suffer from depression too. But the societal pressure of being ‘manly’, keeps them from seeking help. With societal progress, ‘juvenile depression’ is also being addressed.  I’ll try to make this simpler: Depression could happen to anybody. It isn’t bound by chromosomes, age, logic, or the size of your eyebrows.

Where have I heard this before? Right. In Gay Parades. Why is it that anything out of the ‘ordinary’ is considered a passing fancy? If the zombies were to take over the earth, would you still call it a phase? In all probability, you wouldn’t reach the end of the sentence. They’d have eaten your brain by then.

This is a dangerous mentality. Imagine if somebody’s pre-tumor pain was dismissed as a phase. Depression is an excruciating disorder, and needs to be dealt with seriously.

My 6-month-old self soiling the bed, was a phase. My 8th standard Gothic-craze, was a phase. My undying love for Hannah Montana, was a phase (Thankfully). But this violent uncontrollable disease ripping my brain to shreds, is far from one.

“Talking it out with friends is counseling enough”

Basically, when I suffer a heart attack, my neighborhood plumber can take care of the surgery. Why not? Even he knows where the heart is.

It is recommendable to let your emotions out to willing ears, but that’s a part of the process. It isn’t the process in itself. A Psychiatrist’s degree isn’t just a fancy print-out.

Research has found that it’s easier for us to open up to strangers. Simply because they’re anonymous. Your Psychiatrist has no influence on your life. Unlike with your friends, you don’t have to censor out details here. You can be more vulnerable. It’s a ‘safer space’ to vent.

“Every mental disorder leads to the mental asylum”

I never quite understood the hush-hush around mental health issues, until a friend showed me. We had known each other for quite some time. I was fairly certain of his brain’s human-to-caveman ratio. So, I decided to tell him. This is how the conversation went:

He went absolutely pale and retreated in the filmiest manner.

Several families go out of their way to ensure that the neighbors never learn of their son’s psychiatrist. That incident made me realize why. When they hear the D-word, every horror story ever starts playing inside their head.

Every mental disorder does not make one insane, or unfit for society. I am not going to drive knives into your head whenever you’re left alone with me. (It would be fun, though.)

Awareness about depression is extremely important. In the case of physical illnesses, the symptoms are easily identifiable. Depression, having no obvious or standard physical repercussion, often goes undiagnosed. Coupled with social ostracism, it leaves the patient completely helpless. The next time some self-righteous prick proudly lectures on these mythical facts about depression, you know how to school them.

To any patient reading this: Hang in there, soldier. We’re in this together. 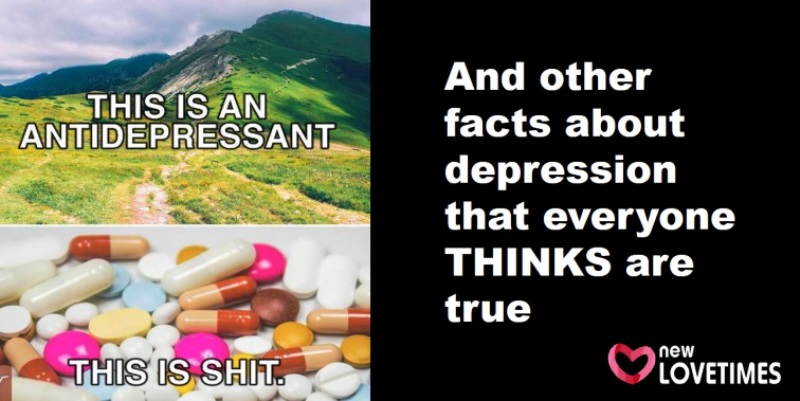 Article Name
9 Facts About Depression Everyone Thinks Are True
Author
Meghalee Mitra
Description
In a world largely affected by depression, you'd think people are informed about it. Turns out, I'm wrong. Here are 9 facts about depression that are false.