Love On Wheels: Bride And Groom (In A Wheelchair) Surprise Wedding Guests With Their First Dance

Kiss me under the light of a thousand stars
Place your head on my beating heart
I’m thinking out loud
That maybe we found love right where we are.

Love gives you the strength to face everything life throws your way. John Palmer proved the same when he moved to move- for his first dance with wife, Corey Langley- like he’d always wanted to, since an unfortunate accident in 1996 left him paralyzed and stuck in a wheelchair for life. 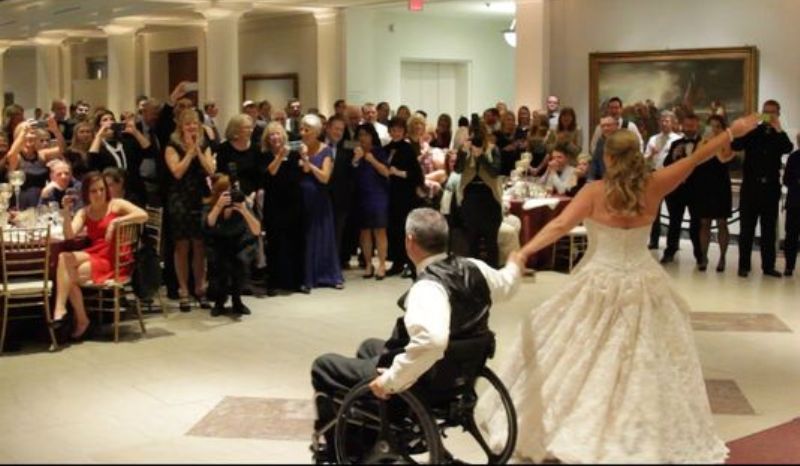 John Palmer, a 37-year-old software developer from Holt, and Corey Langley, his 36-year-old fiancée, never doubted, even for a moment, that they could make this possible. Driven by the determination their love gave them to brave all odds so they could give their 200 guests something more than a listless dance performance with Corey sitting on Palmer’s lap, they geared up to surprise their family and friends with a choreographed love story on wheels. The journey to get there took a lot more than they’d expected. But they were braced with love, and hence, ready.

Suggested read: This man’s response to his wife’s photoshopped pictures wins the day!

The first challenge was finding an apt dance studio with instructors who had experience in training people with disabilities.

“I called 20 dance studios in the Lansing area, and some of them were willing to try (wheelchair dancing), but nobody had any experience with it,” said Longley. “This was just not a time when we wanted to fumble through things with somebody who was doing it for the first time.”

Having come up with the idea himself, Palmer reflects back on how he imagined his first dance with soon-to-be wife Corey, would be:

“Most people – even when neither of them are in a wheelchair – just stand there and sway back and forth. Usually it’s nothing fancy. … And people are probably thinking (Corey) will just ride around in my lap. I will not do that.”

The couple soon found their studio, the Fred Astaire Dance Studio in Bloomfield Hills where their instructor, Sergio Sanchez, a championship ballroom pro from Ecuador, who has been partnering with Cheryl Angelelli, a wheelchair athlete and onetime Paralympian swimmer, hosts ballroom dance workshops for wheelchair users.

However, the next challenge was the location of the studio that was otherwise just right. Situated in Bloomfield Hills, Palmer and Langley’s round trip would be in excess of three hours and that was quite a lot to accommodate in their routine. But Palmer and Langley took up the challenge and came out on the other side – happy and cheerful in each other’s company – like always.

“At first, we were dreading the drive,” said John. “But it became nothing. We’d just get talking and talking, and it became no big deal.” 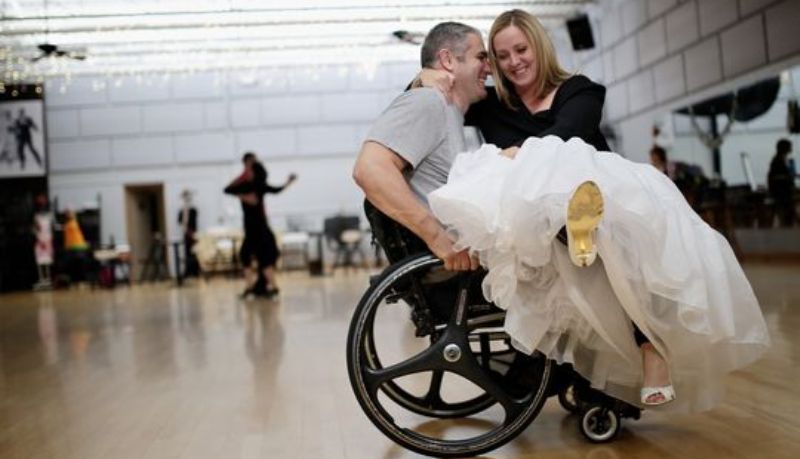 Next up was the actual dance lesson. While the first dance lesson didn’t go as smoothly, they learnt to pick up the movements under Sanchez’s guidance, and are now adept at coaxing fluid movements from Palmer’s chair vis-à-vis the ways in which they push and pull away from each other and how the ensuing momentum can propel their creativity.

“During the first lesson, we were fumbling all over, and I think we both thought, ‘How are we going to do this?'” said Palmer. ” … We were always worried about me running over her wedding dress or her foot, but when you do the spins and turns – it’s not an issue when you understand the way the chair moves, and how you can play off each other.”

Soon, they were leaving the studio, with smiles painted all over their faces.

And it wasn’t long before that the effort they had kept a secret from family and friends was ready to be reap fruit on the very special day their hearts vowed to be together, forever. 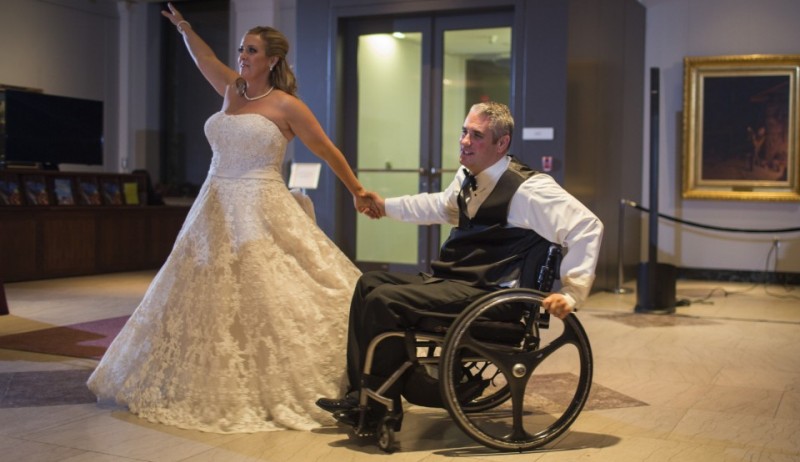 The Ed Sheeran song they chose for the dance opened with the line: “When your legs don’t work like they used to before, and I can’t sweep you off your feet…” And slowly, they twirled and swirled, to the surprise of onlookers, melting into each other – in what was an awwwdorable love story on wheels. 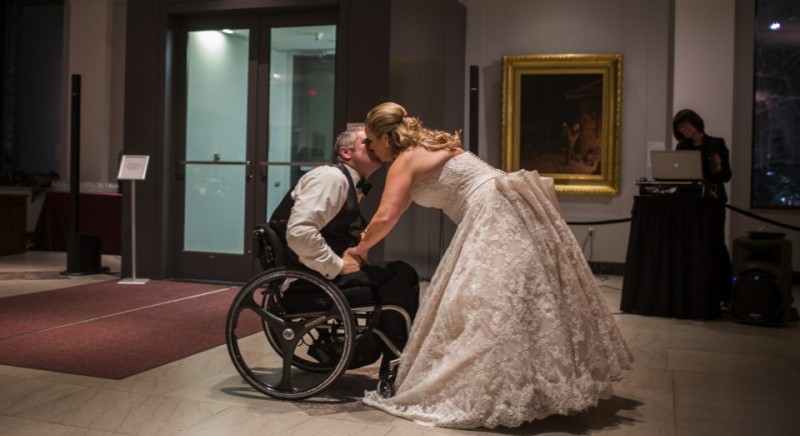 Suggested read: This mom’s tells her daughter about how life changes post-pregnancy

Carefully choreographed, their dance moves melted into a sweetly-timed kiss on the lines:

Kiss me under the light of a thousand stars
Place your head on my beating heart
I’m thinking out loud
That maybe we found love right where we are. 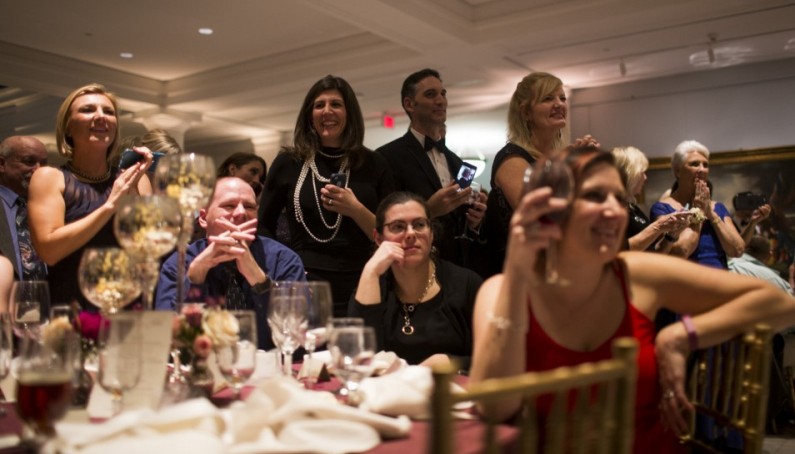 And before they knew it, they had achieved what they’d always wanted – making everyone around applaud the spirit of true love.

Now married, the couple avers that they’d continue their ‘happy’ dance lessons, albeit after a ‘happy, happy honeymoon’ in the Caribbean.

We wish the couple a truly HAPPY married life.

Article Name
Newlyweds Surprise Guests With Unusual First Dance
Author
Sejal Parikh
Description
This couple's first dance proved that their first step toward marriage had a leg- uh- wheel up on us all! LOVE it is!