This Woman’s Facebook Fertility Rant Is The Best Thing You Will Read Today!

Emily Bingham’s Facebook post on women and their decisions to have or not have babies has caught on like a forest on fire. A freelance writer based in Michigan, Emily lashes out against friends, strangers, colleagues or even want-to-be-grandparents and well-intentioned family members who keep pestering women with questions about when they’d start popping babies!

Suggested read: 8 Requests to Moms from women without children

Inspired by the situation of a friend, who Emily says, struggled for a year with fertility treatment to get pregnant, and then was asked a mere month after her child was born, when ‘baby number two’ was coming, the post clearly defines how having a baby or not having one was a matter of personal choice- complicated by a nexus of circumstantial choices or deeply personal ideology. And all of Emily’s words scream out loud and clear that none of those happen to be anybody else’s business save the woman in the situation- and so, all the nosy people who can do nothing better than to wedge their noses in between the ‘the clock’s ticking, you know’ and ‘thought of giving cute Al a baby sister?’ for no REAL reason than plain idle-ness can clear out! 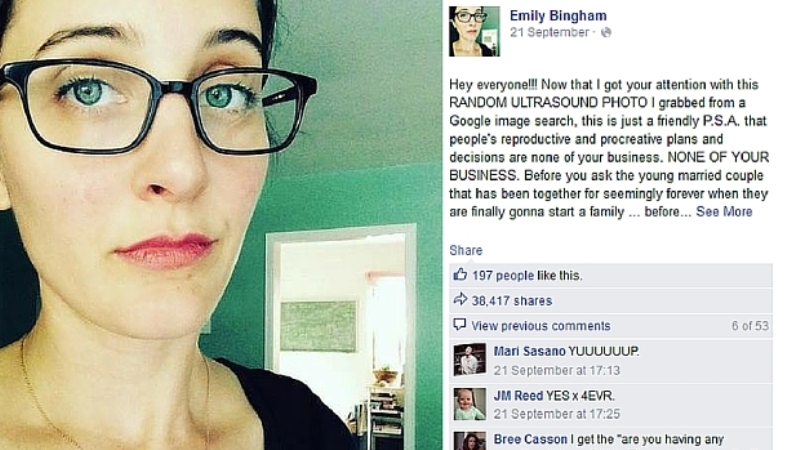 She makes it increasingly clear that a lot of these questions evoke a myriad emotions that may cause the woman on the other end to feel guilt, grief, pain, hurt, loss, regret or simply frustration! And nobody, she claims, has got the RIGHT to make her feel that way.

“Hey everyone!!! Now that I got your attention with this RANDOM ULTRASOUND PHOTO I grabbed from a Google image search, this is just a friendly P.S.A. that people’s reproductive and procreative plans and decisions are none of your business. NONE OF YOUR BUSINESS. Before you ask the young married couple that has been together for seemingly forever when they are finally gonna start a family … before you ask the parents of an only-child toddler when a Little Brother or Little Sister will be in the works … before you ask a single 30-something if/when s/he plans on having children because, you know, clock’s ticking … just stop. Please stop. You don’t know who is struggling with infertility or grieving a miscarriage or dealing with health issues. You don’t know who is having relationship problems or is under a lot of stress or the timing just isn’t right. You don’t know who is on the fence about having kids or having more kids. You don’t know who has decided it’s not for them right now, or not for them ever. You don’t know how your seemingly innocent question might cause someone grief, pain, stress or frustration. Sure, for some people those questions may not cause any fraught feelings — but I can tell you, from my own experiences and hearing about many friends’ experiences — it more than likely does. Bottom line: Whether you are a wanna-be grandparent or a well-intentioned friend or family member or a nosy neighbor, it’s absolutely none of your business. Ask someone what they’re excited about right now. Ask them what the best part of their day was. If a person wants to let you in on something as personal as their plans to have or not have children, they will tell you. If you’re curious, just sit back and wait and let them do so by their own choosing, if and when they are ready.”

The post has received global approbation and women world over have left some REAL love for Emily Bingham-the woman who spoke the TRUTH:

Seraphina Maria commented: “I love you so much. People asking me about my child bearing plans drives me up a tree. Be they my parents or PERFECT STRANGERS, because that happens all too often.”

Lindsay VanHulle wrote: “Can I like this a million times?”

And well, we at NLT are saying- You go girl, you said it and nailed it! Cheerio!

Article Name
Fertility Rant By Emily Bingham: It's The Woman's CHOICE! Really!
Author
Sejal Parikh
Description
Emily Bingham has spoken the TRUTH we all need to accept about women and their decision to have babies or to not have them. READ the fertility rant - NOW!