Starting a conversation is never easy, especially on a dating app. Do you use an overused pickup line like “How you doin’?” or go for a generic “Hey”? The dating app Hinge, which is basically Tinder, but with the matches happening within your Facebook friends, released a report on Thursday, which is all kinds of enlightening. In its experiment, Hinge tried to find out what kinds of ice breakers and opening lines work best with both men and women, once you’ve been matched with another user.

The report is extensive in its details, and is the culmination of a month-long experiment, during which the Hinge team came up with over 100 different openers and prompted a small portion of its users to use these conversation starters. Hinge then tracked which of the pre-written lines were used most frequently, and then measured the response rates to detect trends.

Here is what Hinge gleaned from its experiment:

1. The best and worst performing lines

“If you’re looking for a response, “hey, what’s up?” just won’t cut it as an opening line,” says the report. So what should you use? Among the pre-written conversation starters, the best performing line was, “Two truths and a lie; ready, set, go!” with 31% more likely to get a response, and the worst performing one was, “Would you rather have weekly hiccups or never sneeze to completion ever again?” which was 38% less likely to get a response! In fact, the worst performing line was actually WORSE than just saying ‘hey.’

2. Age is not just a number

Apparently, the age of the user on the other end mattered when sending these opening lines. If the user fell in the 18-23 age group, questions that are surprising and seemingly from the left field, like, “You’re having your portrait painted – what’s your backdrop?” worked best. And for those in the 35+ age group, questions like, “Katy Perry or Taylor Swift?” seemed to click. 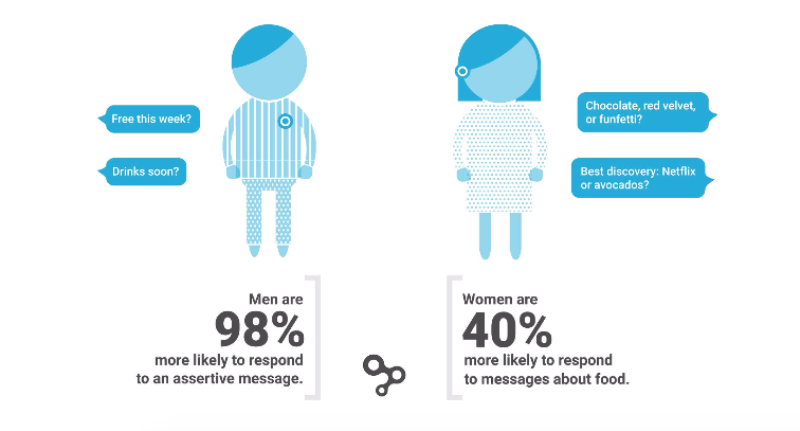 For a woman, sending out bold, assertive messages to men, like, “Drinks soon?” or “Free this week?” netted a whopping 98% chances of getting a response back.

And if a man wants to grab a woman’s attention? Refrain from using a creepy pickup line. A surprising find was the women liked to talk about food – Hinge’s report found that women were 40% more likely to reply to a message if it was about food or culinary trends, like, “Best discovery: Netflix or avocados?”

Unsurprisingly, people in different cities responded to different topics. For example, Los Angeles denizens respond to entertainment questions, like, “Do you think Leo will ever get that Oscar?” while people on the East Coast, NYC, responded to, “Choose: adult treehouse or the ability to talk to animals?” On the other hand, people from San Francisco had a Peter Pan Syndrome because they responded to questions like, “What movie scared you the most when you were little?”

According to the Hinge report, men and women differed on another metric when it came to responses to a first message. For instance, men were found to be rather impatient because if a user waited for more than 6 hours to respond to a message, the likelihood that they’ll respond dropped by 25 percent. On the other hand, women were more patient than men, and the likelihood of response dropped by just 5 percent for the same time period. However, if the wait exceeds 6 hours, then her response rate starts to fall faster too.

So, now that you know the best and worst opening lines to approach someone on a dating app, you shouldn’t have any problems wooing your dream mate, no? 😉

Article Name
Dating App Hinge Reveals The Best Opening Lines That Work
Author
Chaitra Ramalingegowda
Description
Wondering how to break the ice with the best opening lines and impress someone on the other end of a dating app? Hinge has all the answers.