The Single Woman And Her Life: It’s All About The Drama – Part II

If you missed part I, read it here first.

Okay, so you called one of your exes. But that ain’t no new thing, right? It becomes legit when a bad round of dating episodes gives you as much vomit-fuel as a marathon of The Bachelor and you need to as well, for the sake of avoiding my ‘coarse’ humor, ‘blow off’ some steam.

It’s okay. It really is, no matter what people say- because you gotta keep your options open. And we mean with both dating and reality shows. The single woman has it rough, we know and even if people believe that the single woman and her life can rival the TRPs of the Kardashians’ reality TV, life ain’t singularly happening on the ‘single’ side. Yeop- you read that right. The ‘grass is greener’ syndrome is a real thing and while the life of single women around the globe may, admittedly, be high on the drama quotient, the drama isn’t always of the erm, ‘desirable’ kind. So, in solidarity with the single woman and her ‘plight,’ (do I hear a cheer?) it would be nice to re-dramatize some of the dramatic elements people ‘believe’ exist in our lives…

Let’s start with that call to the ex. Honestly, most single women I know are flattered when they learn that people think they have ‘sex’ for breakfast, lunch, and dinner. Not to mention, being forever-obliged for compulsory investment in pepper sprays and like instruments to use for defense when men use the ‘knowledge’ to believe that we are always available and that a ‘no’ still means we can be coerced into giving in to the ‘inviolable rights’ of the aroused male libido. But okay, social message (or what kids call ‘gyan’ nowadays) aside, I think the single woman owes this rep to pop culture. It makes the world believe that not only are we having that much sex- we are also capable of that much sex. But here’s the truth about that one- getting sex is, admittedly, an easy task but having the will to get it in the first place isn’t.

If you are into one-off hookups, you still gotta invest in drinks, your hair and makeup, shave your legs and everything down-there, thread your brows and erm, upgrade your bras and panties because stretched-out unflattering lacies and period stains don’t really make a ‘pretty’ (read: sexy) picture. Even so, you might have some awkward sex and if you see that through for another round of awkwards, you might get somewhere ‘half-decent.’ If you start to see someone, then the novelty of the all-new sex sucks out all the sleep from your life, so you are practically a zombie working wonky hours at work, explaining away your d*ck-hangover afflicted ash-en face with a bad case of flu!

Either way, sex in the single woman’s life isn’t as exciting as people make it out to be- and like with all other people, it starts to add up faster than you realize. Whether it is laziness or sleep or anything else that casts out the sex-demons, the exorcism is a sigh of relief. Sometimes, we take one after we cave in to a big O. You can’t blame us for an occasional sin!

The next one that often knocks the single woman down is ‘public opinion.’ And it ranges from everything about her lonely, insecure, not to forget, selfish life to an ‘incredibly glamorous’ existence and everything in between. If this were plain literal, I’d squeeze in a big LOL between those dual ends and see if I didn’t have to bridge the gap myself. But because the ‘public,’ at large, lacks the imagination to see the animation in my head, I will explain.

You see the ‘selfish’ part of the argument gets thrown right out when the single woman with a bad case of flu (the real one) has to sneak around like a serpent in her own home, simply to scoop up some Kleenex that she will end up soiling in the next twenty minutes! So, pray explain how having to be ‘alone’ at the most difficult times is selfish. Wanting to keep the bed to oneself to enjoy an uninterrupted ten-hour sleep session with Ryan Gosling-dreams and wake up to a washroom that has the toilet seat down- maybe a little selfish- but not foisting another walking, talking, pooping version of oneself into the world to do one’s own bit in stopping global warming or even reducing the number of diapers clogging up landfills- pretty selfless, we say!

Ditto for loneliness. Eff the sappy rom-coms and dating shows and books and *things* that make women believe there’s something wrong with them if they do not have a man by their side. The need for love and human companionship is universal- but to make it the sole reason for one’s existence is nothing short of the foolhardiness evident in the same stupid shows and movies that make you anxious in the first place. So, yeah, grab some cheesecake and watch Dateline episodes until you swear off men altogether or simply, join in on the ‘date line’ for real until you swear off men altogether. Ask me and I can vouch that the first option is easy, breezy and comfy AF. The effing, if at all that’s the saving grace in the latter, not so much!

As for the other ‘glamorous’ end of the spectrum, that opinion comes from the public who has ‘settled down’ and well, are victims of the grass-is-greener-on-the-other-side syndrome. Sigh. That’s the case when most of your kicka*s girlfriends get married and pregnant and you see them once every two years (if they are lucky, that is)! It’s like the Bermuda Triangle took them and every two years, they confer with the husband (read: beg him to babysit) and speak to their toddlers in some toddler-dialect before being granted a smiling night off from both ends to crawl out of the dark hole and see you at the bar.

So, that way- yes, the single woman has a pretty ‘glamorous’ life but that’s because the people pinning the label on her are well, past the woes of this wo-e-manly phase and when they do reappear (if at all), they seem to be encountering something alien. With their glasses, your life looks Carrie Bradshaw-esque- where you are sashaying the world of martinis and glow-in-the-dark condoms- but from where you see it, you have gone from the single woman with a bunch of cool (but equally single) girlfriends who’d slam Tequila shots and dance on tabletops (sometimes, without their tops) to THE single woman who has hardly another single woman on her friend list. Boy, if misery loves company- where’s yours?

Suggested read: Why being a woman who is 30 and single in India is a CRIME!

You try to console yourself when these formerly topless mavens from a bygone era now adjust the same tops on their post-maternity bodies while telling you how being a mother is the hardest thing ever- how you lose sleep and don’t shower and never do your hair or makeup and only watch kids’ shows and are perennially tired- and how it is still worth it. Because you know you are unconvinced- you had lost them at the no-sleep part! Sure, you feel bad sometimes but you’d take back these fly women from their singledom days than cross over the line and be in their shoes.

Being swallowed by the black hole isn’t as appealing to you! You would rather take some of the ‘glamour’ from their glasses and rub it off on yourself- so that even if you go back home, strip down to your undies and dance to a Beyoncé number, you’d feel pretty darned ‘good’ about yourself. Sure, it’d be nice to have a Minaj-like single lassie with a squirt gun and burger in hand by the side- but hey, the reflection in the mirror is some*thing* too!

The single woman is a conundrum yes- she may deeply commit to a brownie sundae but dating test runs do not display the same quality as a brownie sundae- so don’t blame her if the lightning didn’t strike there. She can test the waters, take a swim or simply, run from afar- because, when she wishes to change that ‘status’ that irks most, she definitely will. Until then, the drama will do. Like Queen Beyoncé. 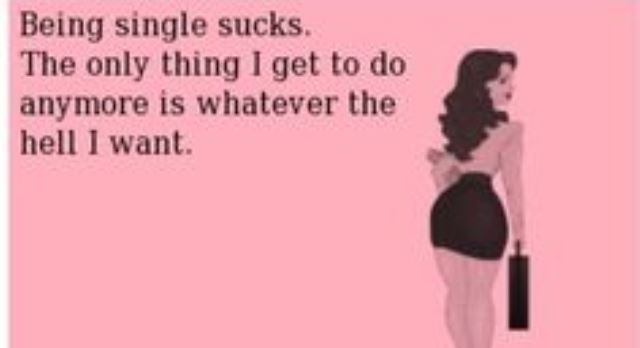 Article Name
The Single Woman And Her Life: It’s All About The Drama - Part II
Author
Sejal Parikh
Description
The single woman has a life oozing DRAMA!