By using punctuation and phrasings that are not conventional, he brought in some radical changes in the way poetry was written back then. He mostly used lowercase to write his poems, but sometimes he also capitalized some words when he felt the need of it. While his critics consider his use of compound words and his choice of structure arbitrary, many would argue how it was done for a reason and gave him his unique style.

In today’s post, I will be sharing with you 8 of my favorite love poems by E E Cummings. Hope you will enjoy them as much as I do.

1. i carry your heart with me

“i carry your heart with me(i carry it in

my heart)i am never without it(anywhere

i go you go,my dear;and whatever is done

by only me is your doing,my darling)

and it’s you are whatever a moon has always meant

and whatever a sun will always sing is you

here is the deepest secret nobody knows

higher than soul can hope or mind can hide)

and this is the wonder that’s keeping the stars apart

i carry your heart(i carry it in my heart)

This poem is very close to my being. It comforted me greatly when I lost my grandmother, and so, it had to top this list of my favorites by Cummings. This piece of absolute beauty was published in the year 1952, and made the poet one of the most adored love poets ever. Many have compared this poem with a sonnet because of the way it is structured. But Cummings has indeed added his own touch of modernity in the verse.

Fun fact: The first line (also the last line) of the poem is often tattooed by people who love all things love.

2. Since Feeling is First

since feeling is first

who pays any attention

to the syntax of things

will never wholly kiss you;

wholly to be a fool

while Spring is in the world

and kisses are a better fate

lady i swear by all flowers. Don’t cry

—the best gesture of my brain is less than

your eyelids’ flutter which says

we are for each other: then

laugh, leaning back in my arms

for life’s not a paragraph

and death i think is no parenthesis

Since Feeling is First was published in 1926. As I just told you a couple of paragraphs before, nature and love were Cummings’ themes. The poems where he explored these subjects were the most loved poems of him. For example, in this poem, the speaker is telling his lover about the nature of love. According to him, love is more in sync with passion and emotions than wisdom or knowledge ever will be

he was a handsome man

and what i want to know is

Published in 1920, this poem is Cummings take on William Frederick “Buffalo Bill” Cody, one of the most vibrant personalities.  On the first read, you will feel that Cummings is describing and admiring Cody for his handsomeness and joviality. But on the second read, you will observe that Buffalo Bill’s is, in fact, a satirical poem on conventional idea of valor and bravery. In the poem, Cummings also talks about how irrelevant and inconsequential we all are in the end.

4. next to of course god america I

“next to of course god america i

love you land of the pilgrims’ and so forth oh

say can you see by the dawn’s early my

and are no more. what of it we should worry

in every language even deafanddumb

thy sons acclaim your glorious name by gorry

by jingo by gee by gosh by gum

why talk of beauty what could be more beaut-

iful than these heroic happy dead

they did not stop to think they died instead

then shall the voice of liberty be mute?”

He spoke. And drank rapidly a glass of water

Published in 1926, this is a satire on conventional idea of patriotism. The structure resembles a broken sonnet. It does not have an octave or a sestet like sonnets do, but contains 13 lines spoken by the narrator, who is a politician, in all probability. In the end, we have a separated last line that emphasizes importance of patriotism. The last line shows that the speaker is anxious because he understands that his speech is only a maneuver to misguide the spectators.

By now you must have figured that Cummings poems are unusual not only in thought, but also in presentation. This is one of the best examples to illustrate the point I just made. In this poem, we find the word “a leaf falls” inserted between the word “loneliness”. So to make it simpler, the text reads: “l(a leaf falls)oneliness.” The letter “l” in the beginning, when taken in isolation, can mean the number 1. Cumming also writes other “l” in loneliness in another line. Also, falling leaf is often considered a metaphor for loneliness. According to Richard S. Kennedy, Cummings’ biographer, the poem is “the most delicately beautiful literary construct that Cummings ever created”.

(cccome?said he
ummm said she
you’re divine!said he
(you are Mine said she)

7. somewhere i have never travelled gladly beyond

somewhere i have never travelled,gladly beyond

any experience,your eyes have their silence:

in your most frail gesture are things which enclose me,

or which i cannot touch because they are too near

your slightest look easily will unclose me

though i have closed myself as fingers,

you open always petal by petal myself as Spring opens

or if your wish be to close me,i and

my life will shut very beautifully,suddenly,

as when the heart of this flower imagines

nothing which we are to perceive in this world equals

the power of your intense fragility:whose texture

compels me with the color of its countries,

rendering death and forever with each breathing

(i do not know what it is about you that closes

and opens;only something in me understands

the voice of your eyes is deeper than all roses)

This poem, published in 1931, is considered one of Cummings’ best love poems. It talks about the intense emotions the narrator feels toward his beloved. He compares his feeling to that of a traveler on a delightful journey to the unknown. If you have watched Woody Allen’s Academy Award-winning movie, “Hannah and Her Sisters”, then you will have noticed the last line of this poem used in it.

running from marbles and

when the world is puddle-wonderful

from hop-scotch and jump-rope and

This poem is Cummings’ most popular nature poem. It is a child’s narrative at the onset of spring. The structure of the poem resembles a nursery rhyme, and the use of compound words also suggest that the poem is a poem by a child. However, over the years, many experts have found out that balloonMan, in fact, represents a lot of things.

That is all we have on today’s post on Today’s Book on #50BooksInAYear: Collected Love Poems By E E Cummings. Did you like what you just read? Let us know in the comment section below. 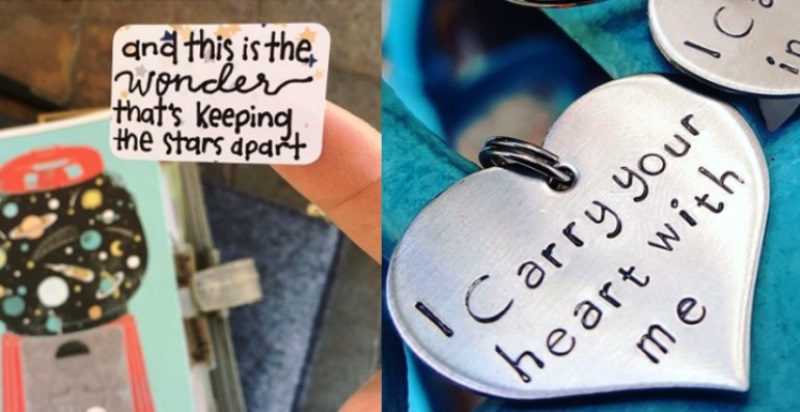 Article Name
Today’s Book on #50BooksInAYear: Collected Love Poems By E. E. Cummings
Author
Riya Roy
Description
In today’s post, I will be sharing with you 8 of my favorite Love poems by E E Cummings. Hope you will enjoy them as much as I do.