A Conqueror Of All Things Misogynistic, Here’s Why Blythe Baird’s Poetry Matters

“Blythe Baird is a forerunner in the search for intersectional feminism, a conquerer of all things misogynistic, and the realization of so many dreams before her. She is honest in a way that dares you to grab a mirror.” – Siaara Freeman

I have been reading poems by Blythe Baird lately, and boy, don’t they shatter the comfort of a cushy life that one’s been living, away from tragedy and chaos and trauma! Her poems are important; they will disturb you, and that is what art is supposed to do. If you find yourself in the same boat as Baird, then again, her work will comfort you by crushing the thick walls of loneliness and isolation that you have built around yourself. Her poems will make you feel important; your struggle feels less insignificant.

So, no matter which side of the fence you find yourself on, it is necessary you read her poems.

Blythe Baird is a 21-year-old American film actress, who is passionate about writing and spoken word poetry. She spent her childhood days outside of Chicago. Today, Baird lives in St. Paul MN. She is a full-time college student.

In 2016, Baird was one of the finalists for the Global Young Achiever Award. She has also held the 1st and 4th spots for the most watched spoken word poetry videos on Button poetry. This talented word-magician has been featured by major websites like Mic, Vice, The Huffington Post, EverydayFeminism, Ashton Kutcher, Adweek, A-Plus, Yahoo News, AU News, Bustle, Write Bloody and more.

Baird’s first book, titled, Give Me A God I Can Relate To, was published in 2015, and according to Amazon and Goodreads, it is a pretty good book (4.5 stars, b*tches!).

Here are some of Baird’s quotes and poems that have touched me, and I am sure will strike a chord with you too.

2. The universe is looking out for you… Believe

“I am trying to see things in perspective. My dog wants a bite of my peanut butter chocolate chip bagel. I know she cannot have this, because chocolate makes dogs very sick. My dog does not understand this. She pouts and wraps herself around my leg like a scarf and purrs and tries to convince me to give her just a tiny bit. When I do not give in, she eventually gives up and lays in the corner, under the piano, drooping and sad. I hope the universe has my best interest in mind like I have my dog’s. When I want something with my whole being, and the universe withholds it from me, I hope the universe thinks to herself: “Silly girl. She thinks this is what she wants, but she does not understand how it will hurt.”

“The only other girl at the party
is ranting about feminism. The audience:
a sea of rape jokes and snapbacks
and styrofoam cups and me. They gawk
at her mouth like it is a drain
clogged with too many opinions.
I shoot her an empathetic glance
and say nothing. This house is for
wallpaper women. What good
is wallpaper that speaks?
I want to stand up, but if I do,
whose coffee table silence
will these boys rest their feet on?
I want to stand up, but if I do,
what if someone takes my spot?
I want to stand up, but if I do,
what if everyone notices I’ve been
sitting this whole time? I am guilty
of keeping my feminism in my pocket
until it is convenient not to, like at poetry
slams or my women’s studies class.
There are days I want people to like me
more than I want to change the world.
There are days I forget we had to invent
nail polish to change color in drugged
drinks and apps to virtually walk us home
at night and mace disguised as lipstick.
Once, I told a boy I was powerful
and he told me to mind my own business.
Once, a boy accused me of practicing
misandry. You think you can take
over the world? And I said No,
I just want to see it. I just need
to know it is there for someone.
Once, my dad informed me sexism
is dead and reminded me to always
carry pepper spray in the same breath.
We accept this state of constant fear
as just another part of being a girl.
We text each other when we get home
safe and it does not occur to us that our
guy friends do not have to do the same.
You could saw a woman in half
and it would be called a magic trick.
That’s why you invited us here,
isn’t it? Because there is no show
without a beautiful assistant?
We are surrounded by boys who hang up
our naked posters and fantasize
about choking us and watch movies
we get murdered in. We are the daughters
of men who warned us about the news
and the missing girls on the milk carton
and the sharp edge of the world.
They begged us to be careful. To be safe.
Then told our brothers to go out and play.”

4. No room to carry anyone’s chaos but my own

“I am trying to sleep on the front porch of forgiveness. I am too young to be this lonely. Still, do not mistake all of my honest open for empty. I didn’t leave the door of my love unlocked so you could mistake my sadness for a shelf. I do not have room to carry anyone’s chaos but my own. If I sink, it will be in my own ocean. If I float, it will be on the ship I built with my own hands.”

5. The dilemma of being happy and watching life closely

“I am trying to both be happy and pay attention to the world around me. I do not know if it is possible to do both at the same time.”

6. An art museum of trauma

“If my trauma were made into an art museum, the most popular exhibit
would showcase portraits of every man who has ever raped me, snarling.”

7. A reunion of mistakes

“In this room, every mistake I have
ever made meets up at my favorite coffee house.”

8. When the fat girl gets skinny

The year of skinny pop and sugar-free jello cups,
we guzzled vitamin water and vodka.
Toasting to high school and survival,
complimenting each others thigh gaps.

Trying diets we found on the internet:
menthol cigarettes, eating in front of a mirror, donating blood.
Replacing meals with other practical hobbies
like making flower crowns, or fainting.

Wondering why I hadn’t had my period in months, or why breakfast tastes like giving up.
Or how many more productive ways I could’ve spent my time today besides googling the calories in the glue of a U.S envelope.

Watching America’s Next Top Model like the gospel,
hunching naked over a bathroom scale shrine,
crying into an empty bowl of cocoa puffs
because I only feel pretty when I’m hungry.

If you are not recovering, you are dying.

By the time I was sixteen, I had already experienced being clinically overweight, underweight and obese.
As a child fat was the first word people used to describe me,
which didn’t offend me, until I found out it was supposed to.

When I lost weight, my dad was so proud, he started carrying my before-and-after photo in his wallet.
So relieved he could stop worrying about me getting diabetes.
He saw a program on the news about the epidemic with obesity, said he’s just so glad to finally see me taking care of myself.

So when I evaporated, of course everyone congratulated me on getting healthy.
Girls at school who never spoke to me before, stopped me in the hallway to ask how I did it.

I say “I am sick”. They say “No, you’re an inspiration!”
How could I not fall in love with my illness?
With becoming the kind of silhouette people are supposed to fall in love with?
Why would I ever want to stop being hungry, when anorexia was the most interesting thing about me?

My story may not be as exciting as it used to,
but at least there is nothing left to count.
The calculator in my head finally stopped.

I used to love the feeling of drinking water on an empty stomach, waiting for the coolness to slip all the way down and land in the well.
Not obsessed with being empty but afraid of being full.

I used to be proud when I was cold in a warm room.
Now, I am proud. I have stopped seeking revenge on this body.
This was the year of eating when I was hungry without punishing myself and I know it sound ridiculous, but that shit is hard.

When I was little, someone asked me

what I wanted to be when I grew up

That is all we have on today’s post on Blythe Baird. Did you like what you just read? Let us know in the comment section below. 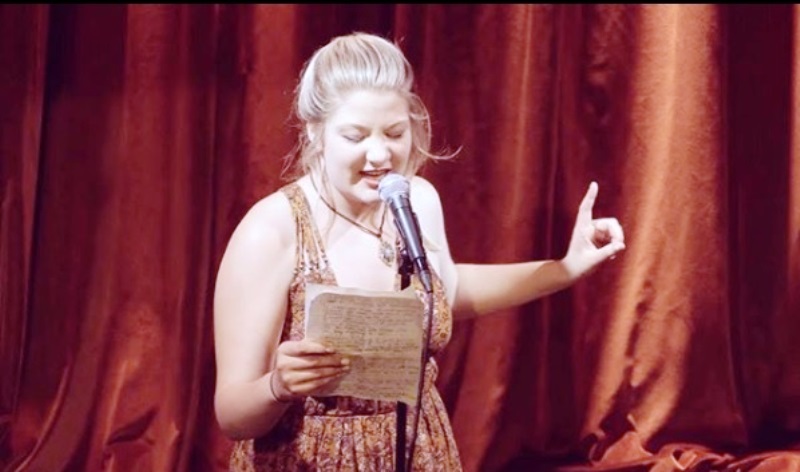 Article Name
Here Is Why Blythe Baird Is A Spoken Word Poetry Goddess
Author
Riya Roy
Description
Poems by Blythe Baird are important; they'll disturb you, and that's what art is supposed to do. Here are her best poems that will strike a chord with you.