A must-read, not just for management graduates, but for anyone who wants to live an effective life.

In today’s post, we will be sharing with you some of the most profound quotes from the book, 7 Habits Of Highly Effective People by Stephen Covey.

The best quotes from The 7 Habits Of Highly Effective People 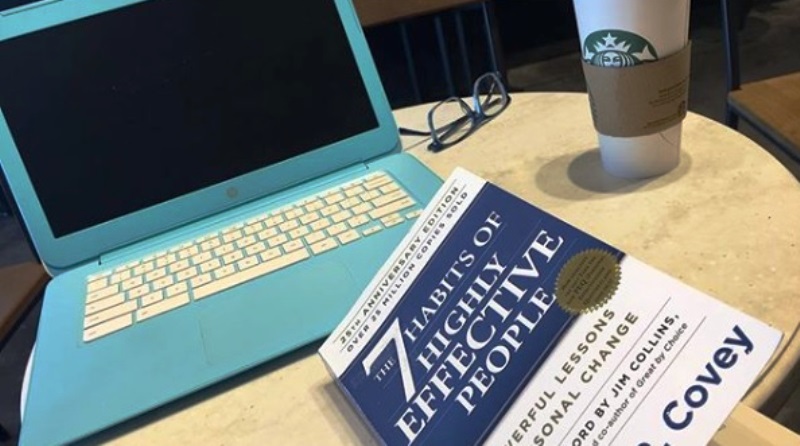 “But until a person can say deeply and honestly, “I am what I am today because of the choices I made yesterday,” that person cannot say, “I choose otherwise.”

“Start with the end in mind.”

“To change ourselves effectively, we first have to change our perceptions.”

“When the trust account is high, communication is easy, instant, and effective.”

“Two people can see the same thing, disagree, and yet both be right. It’s not logical; it’s psychological.”

“We see the world, not as it is, but as we are──or, as we are conditioned to see it.”

“Sow a thought, reap an action; sow an action, reap a habit; sow a habit, reap a character; sow a character, reap a destiny.”

“My wife and I just don’t have the same feelings for each other we used to have. I guess I just don’t love her anymore and she doesn’t love me. What can i do?”
“The feeling isn’t there anymore?” I asked.
“That’s right,” he reaffirmed. “And we have three children we’re really concerned about. What do you suggest?”
“love her,” I replied.
“I told you, the feeling just isn’t there anymore.”
“Love her.”
“You don’t understand. the feeling of love just isn’t there.”
“Then love her. If the feeling isn’t there, that’s a good reason to love her.”
“But how do you love when you don’t love?”
“My friend, love is a verb. Love – the feeling – is a fruit of love, the verb. So love her. Serve her. Sacrifice. Listen to her. Empathize. Appreciate. Affirm her. Are you willing to do that?”

“If I really want to improve my situation, I can work on the one thing over which I have control – myself.”

“It is one thing to make a mistake, and quite another thing not to admit it. People will forgive mistakes, because mistakes are usually of the mind, mistakes of judgment. But people will not easily forgive the mistakes of the heart, the ill intention, the bad motives, the prideful justifying cover-up of the first mistake.”

“Habit is the intersection of knowledge (what to do), skill (how to do), and desire (want to do).”

“The ability to subordinate an impulse to a value is the essence of the proactive person.”

“Courage isn’t absent of fear, it is the awareness that something else is important”

“Our behavior is a function of our decisions, not our conditions.”

“As you care less about what people think of you, you will care more about what others think of themselves.”

“Admission of ignorance is often the first step in our education.”

“People can’t live with change if there’s not a changeless core inside them.”

“It comes from within.”

“There’s no better way to inform and expand you mind on a regular basis than to get into the habit of reading good literature.”

“How you treat the one reveals how you regard the many, because everyone is ultimately a one.”

“If you want to have a more pleasant, cooperative teenager, be a more understanding, emphatic, consistent, loving parent.”

“Begin each day with the blueprint of my deepest values FIRMLY in mind then when challenges come, make decisions BASED on those values.”

“Treat them all the same by treating them differently.”

“When air is charged with emotions, an attempt to teach is often perceived as a form of judgment and rejection.”

“To maintain the P/PC Balance, the balance between the golden egg (production) and the health and welfare of the goose (production capability) is often a difficult judgment call. But I suggest it is the very essence of effectiveness.”

“The only person I know, is the person I want to be”

“people have character strength but they lack communication skills, and that undoubtedly affects the quality of relationships as well.”

“We must look at the lens through we see the world, as well as the world we see, and that the lens itself shapes how we interpret the world.”

“Attending church does not necessarily mean living the principles taught in those meeting. You can be active in a church but inactive in its gospel.”

“Proactive people focus their efforts in the Circle of Influence. They work on the things they can do something about. The nature of their energy is positive, enlarging and magnifying, causing their Circle of Influence to increase. Reactive people, on the other hand, focus their efforts in the Circle of Concern. They focus on the weakness of other people, the problems in the environment, and circumstances over which they have no control. Their focus results in blaming and accusing attitudes, reactive language, and increased feelings of victimization. The negative energy generated by that focus, combined with neglect in areas they could do something about, causes their Circle of Influence to shrink.”

“It’s sometimes a painful process. It’s a change that has to be motivated by a higher purpose, by the willingness to subordinate what you think you want now for what you want later.”

“Inevitably, anytime we are too vulnerable we feel the need to protect ourselves from further wounds. So we resort to sarcasm, cutting humor, criticism — anything that will keep from exposing the tenderness within. Each partner tends to wait on the initiative of the other for love, only to be disappointed but also confirmed as to the rightness of the accusations made.”

That is all we have on today’s post on The 7 Habits Of Highly Effective People by Stephen R. Covey. Did you like what you just read? Let us know in the comment section below.