#50BooksInAYear To Kill A Mocking Bird By Harper Lee

Here’s what Goodreads has to say about the book:

“The unforgettable novel of a childhood in a sleepy Southern town and the crisis of conscience that rocked it, To Kill A Mockingbird became both an instant bestseller and a critical success when it was first published in 1960. It went on to win the Pulitzer Prize in 1961 and was later made into an Academy Award-winning film, also a classic.

Compassionate, dramatic, and deeply moving, To Kill A Mockingbird takes readers to the roots of human behavior – to innocence and experience, kindness and cruelty, love and hatred, humor and pathos. Now with over 18 million copies in print and translated into forty languages, this regional story by a young Alabama woman claims universal appeal. Harper Lee always considered her book to be a simple love story. Today it is regarded as a masterpiece of American literature.”

This is a must read. 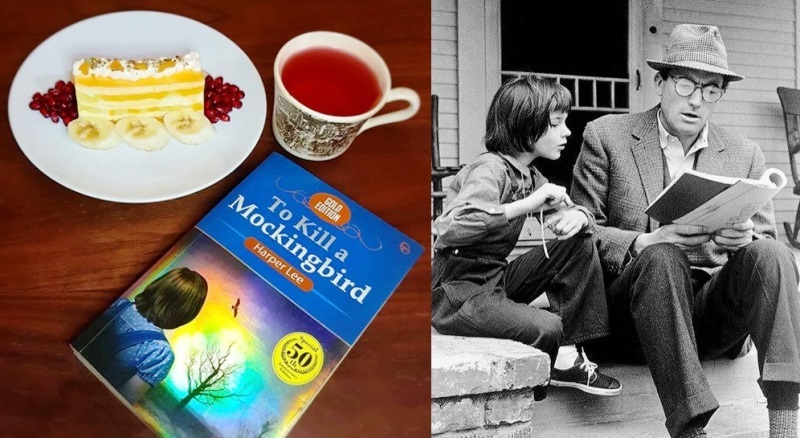 In today’s post, we will be sharing with you some of the most profound quotes from, To Kill A Mocking Bird.

To Kill A Mocking Bird By Harper Lee

“You never really understand a person until you consider things from his point of view… Until you climb inside of his skin and walk around in it.”

“Until I feared I would lose it, I never loved to read. One does not love breathing.”

“I wanted you to see what real courage is, instead of getting the idea that courage is a man with a gun in his hand. It’s when you know you’re licked before you begin, but you begin anyway and see it through no matter what.
– Atticus Finch”

“People generally see what they look for, and hear what they listen for.”

“The one thing that doesn’t abide by majority rule is a person’s conscience.”

“Atticus told me to delete the adjectives and I’d have the facts.”

“They’re certainly entitled to think that, and they’re entitled to full respect for their opinions… but before I can live with other folks I’ve got to live with myself. The one thing that doesn’t abide by majority rule is a person’s conscience.”

“Sometimes the Bible in the hand of one man is worse than a whisky bottle in the hand of (another)… There are just some kind of men who – who’re so busy worrying about the next world they’ve never learned to live in this one, and you can look down the street and see the results.”

“Atticus said to Jem one day, “I’d rather you shot at tin cans in the backyard, but I know you’ll go after birds. Shoot all the blue jays you want, if you can hit ‘em, but remember it’s a sin to kill a mockingbird.” That was the only time I ever heard Atticus say it was a sin to do something, and I asked Miss Maudie about it. “Your father’s right,” she said. “Mockingbirds don’t do one thing except make music for us to enjoy. They don’t eat up people’s gardens, don’t nest in corn cribs, they don’t do one thing but sing their hearts out for us. That’s why it’s a sin to kill a mockingbird.”

“People in their right minds never take pride in their talents.”

“As you grow older, you’ll see white men cheat black men every day of your life, but let me tell you something and don’t you forget it—whenever a white man does that to a black man, no matter who he is, how rich he is, or how fine a family he comes from, that white man is trash”

“It was times like these when I thought my father, who hated guns and had never been to any wars, was the bravest man who ever lived.”

“Real courage is when you know you’re licked before you begin, but you begin anyway and see it through no matter what.”

“You just hold your head high and keep those fists down. No matter what anybody says to you, don’t you let ’em get your goat. Try fightin’ with your head for a change.
-Atticus Finch”

“It’s never an insult to be called what somebody thinks is a bad name. It just shows you how poor that person is, it doesn’t hurt you.”

“When a child asks you something, answer him, for goodness sake. But don’t make a production of it. Children are children, but they can spot an evasion faster than adults, and evasion simply muddles ’em.”

“We’re paying the highest tribute you can pay a man. We trust him to do right. It’s that simple.”

“I was born good but had grown progressively worse every year. Scout”

“Neighbors bring food with death and flowers with sickness and little things in between. Boo was our neighbor. He gave us two soap dolls, a broken watch and chain, a pair of good-luck pennies, and our lives. But neighbors give in return. We never put back into the tree what we took out of it: we had given him nothing, and it made me sad.”

“Things are always better in the morning.”

“You can choose your friends but you sho’ can’t choose your family, an’ they’re still kin to you no matter whether you acknowledge ’em or not, and it makes you look right silly when you don’t.”

“It’s not time to worry yet”

That is all we have on today’s post on To Kill A Mocking Bird by Harper Lee. Did you like what you just read? Let us know in the comment section below.