Elegy is usually defined as a verse written in elegiac couplets; it was a poetic form used by poets in ancient Greece. A more modern definition of an elegy is: a poem of serious reflection characteristically a lament for the dead.

In today’s post, we have curated some of the best elegy poems about death. From Thomas Gray and Walt Whitman to W.H. Auden and Alfred Lord Tennyson, the list has some of the finest poets the world has ever seen. We hope you will enjoy reading these gems just as much as we have enjoyed reading them.

Suggested read: 8 Of The Greatest Poems Of All Time By Classical Poets

1. Elegy Written in a Country Churchyard

But Knowledge to their eyes her ample page

Rich with the spoils of time did ne’er unroll;

And froze the genial current of the soul.

Full many a gem of purest ray serene,

Full many a flow’r is born to blush unseen,

And waste its sweetness on the desert air.

O Lake! Scarce has a single year coursed past.

To waves that she was meant to see again,

I come alone to sit upon this stone

You saw her sit on then.

O Captain! my Captain! our fearful trip is done,

The ship has weather’d every rack, the prize we sought is won,

The port is near, the bells I hear, the people all exulting,

While follow eyes the steady keel, the vessel grim and daring;

O the bleeding drops of red,

Where on the deck my Captain lies,

O Captain! my Captain! rise up and hear the bells;

For you they call, the swaying mass, their eager faces turning;

This arm beneath your head!

It is some dream that on the deck,

My Captain does not answer, his lips are pale and still,

My father does not feel my arm, he has no pulse nor will,

The ship is anchor’d safe and sound, its voyage closed and done,

From fearful trip the victor ship comes in with object won;

But I with mournful tread,

Walk the deck my Captain lies,

I envy not in any moods

The captive void of noble rage,

The linnet born within the cage,

That never knew the summer woods:

I envy not the beast that takes

His license in the field of time,

Unfetter’d by the sense of crime,

To whom a conscience never wakes;

Nor, what may count itself as blest,

The heart that never plighted troth

But stagnates in the weeds of sloth;

I hold it true, whate’er befall;

I feel it, when I sorrow most;

‘Tis better to have loved and lost

Than never to have loved at all.

Stop all the clocks, cut off the telephone,
Prevent the dog from barking with a juicy bone,
Silence the pianos and with muffled drum
Bring out the coffin, let the mourners come.

Let aeroplanes circle moaning overhead
Scribbling on the sky the message ‘He is Dead’.
Put crepe bows round the white necks of the public doves,
Let the traffic policemen wear black cotton gloves.

He was my North, my South, my East and West,
My working week and my Sunday rest,
My noon, my midnight, my talk, my song;
I thought that love would last forever: I was wrong.

The stars are not wanted now; put out every one,
Pack up the moon and dismantle the sun,
Pour away the ocean and sweep up the wood;
For nothing now can ever come to any good.

And every flower that sad embroidery wears;

Bid amaranthus all his beauty shed,

And daffadillies fill their cups with tears,

To strew the laureate hearse where Lycid lies.

For so, to interpose a little ease,

Our lives are fated as the rivers

That gather downward to the sea

We know as Death;

And thither every flood delivers

The pride and pomp of seigniory

8. Adonaïs: An Elegy on the Death of John Keats, Author of Endymion, Hyperion, etc.

And feeds her grief with his remember’d lay,

And will no more reply to winds or fountains,

Or amorous birds perch’d on the young green spray,

Or herdsman’s horn, or bell at closing day;

Since she can mimic not his lips, more dear

Than those for whose disdain she pin’d away

Into a shadow of all sounds: a drear

Murmur, between their songs, is all the woodmen hear.

Ah, woe is me! Winter is come and gone,

But grief returns with the revolving year;

The airs and streams renew their joyous tone;

The ants, the bees, the swallows reappear;

The amorous birds now pair in every brake,

And build their mossy homes in field and brere;

And the green lizard, and the golden snake,

Ah, woe is me! Winter is come and gone,

But grief returns with the revolving year;

The airs and streams renew their joyous tone;

The ants, the bees, the swallows reappear;

The amorous birds now pair in every brake,

And build their mossy homes in field and brere;

And the green lizard, and the golden snake,

9. On My First Sonne

Farewell, thou child of my right hand, and joy;

My sin was too much hope of thee, lov’d boy.

Seven years tho’ wert lent to me, and I thee pay,

Exacted by thy fate, on the just day.

O, could I lose all father now! For why

Will man lament the state he should envy?

To have so soon ‘scap’d world’s and flesh’s rage,

And if no other misery, yet age?

For whose sake henceforth all his vows be such,

As what he loves may never like too much.

That is all we have on today’s post on the best elegy poems about death. Did you like what you just read? Let us know in the comment section below. 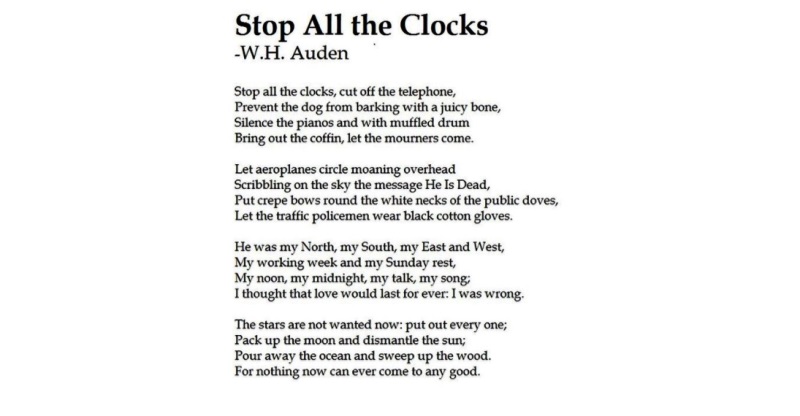 Article Name
Top 9 Best Elegy Poems About Death
Author
Ruth Russell
Description
In today’s post, we have the best elegy poems about death. From Thomas Gray & Walt Whitman to W.H. Auden & Alfred Lord Tennyson, the list has them all.