Robert Frost And His Genius!

In today’s post, we are celebrating the genius of Robert Frost. While most of us are aware of Frost’s, Stopping By Woods On A Snowy Evening, not many of us know of the other equally marvelous and stunning poems by the phenomenal poet. We have, therefore, curated a list of the 6 best poems by Robert Frost that should be appreciated for their brilliance.

Suggested read: Phil Kaye Is The Dumbledore Of Spoken Word Poetry! Here’s Why

All out of doors looked darkly in at him

Through the thin frost, almost in separate stars,

That gathers on the pane in empty rooms.

What kept his eyes from giving back the gaze

Was the lamp tilted near them in his hand.

What kept him from remembering what it was

That brought him to that creaking room was age.

He stood with barrels round him—at a loss.

And having scared the cellar under him

In clomping there, he scared it once again

Of trees and crack of branches, common things,

A light he was to no one but himself

Where now he sat, concerned with he knew what,

A quiet light, and then not even that.

He consigned to the moon,—such as she was,

So late-arising,—to the broken moon

As better than the sun in any case

For such a charge, his snow upon the roof,

His icicles along the wall to keep;

And slept. The log that shifted with a jolt

Once in the stove, disturbed him and he shifted,

And eased his heavy breathing, but still slept.

A farm, a countryside, or if he can,

It’s thus he does it of a winter night.

My Sorrow, when she’s here with me,
Thinks these dark days of autumn rain
Are beautiful as days can be;
She loves the bare, the withered tree;
She walks the sodden pasture lane.

Her pleasure will not let me stay.
She talks and I am fain to list:
She’s glad the birds are gone away,
She’s glad her simple worsted grey
Is silver now with clinging mist.

The desolate, deserted trees,
The faded earth, the heavy sky,
The beauties she so truly sees,
She thinks I have no eye for these,
And vexes me for reason why.

Not yesterday I learned to know
The love of bare November days
Before the coming of the snow,
But it were vain to tell her so,
And they are better for her praise

The witch that came (the withered hag)
To wash the steps with pail and rag
Was once the beauty Abishag,

The picture pride of Hollywood.
Too many fall from great and good
For you to doubt the likelihood.

Die early and avoid the fate.
Or if predestined to die late,
Make up your mind to die in state.

Make the whole stock exchange your own!
If need be occupy a throne,
Where nobody can call you crone.

Some have relied on what they knew,
Others on being simply true.
What worked for them might work for you.

No memory of having starred
Atones for later disregard
Or keeps the end from being hard.

Better to go down dignified
With boughten friendship at your side
Than none at all. Provide, provide!

Something there is that doesn’t love a wall,

That sends the frozen-ground-swell under it,

And spills the upper boulders in the sun;

And makes gaps even two can pass abreast.

The work of hunters is another thing:

I have come after them and made repair

Where they have left not one stone on a stone,

But they would have the rabbit out of hiding,

To please the yelping dogs. The gaps I mean,

No one has seen them made or heard them made,

But at spring mending-time we find them there.

I let my neighbour know beyond the hill;

And on a day we meet to walk the line

And set the wall between us once again.

We keep the wall between us as we go.

To each the boulders that have fallen to each.

And some are loaves and some so nearly balls

We have to use a spell to make them balance:

“Stay where you are until our backs are turned!”

We wear our fingers rough with handling them.

One on a side. It comes to little more:

There where it is we do not need the wall:

He is all pine and I am apple orchard.

My apple trees will never get across

And eat the cones under his pines, I tell him.

Spring is the mischief in me, and I wonder

If I could put a notion in his head:

“Why do they make good neighbours? Isn’t it

Before I built a wall I’d ask to know

What I was walling in or walling out,

And to whom I was like to give offence.

Something there is that doesn’t love a wall,

That wants it down.” I could say “Elves” to him,

But it’s not elves exactly, and I’d rather

He said it for himself. I see him there

Bringing a stone grasped firmly by the top

He moves in darkness as it seems to me,

Not of woods only and the shade of trees.

He will not go behind his father’s saying,

And he likes having thought of it so well

5. Stopping by Woods on a Snowy Evening

Whose woods these are I think I know.

His house is in the village though;

He will not see me stopping here

To watch his woods fill up with snow.

My little horse must think it queer

To stop without a farmhouse near

Between the woods and frozen lake

The darkest evening of the year.

He gives his harness bells a shake

To ask if there is some mistake.

The only other sound’s the sweep

Of easy wind and downy flake.

The woods are lovely, dark and deep,

But I have promises to keep,

And miles to go before I sleep,

And miles to go before I sleep.

When I see birches bend to left and right

Across the lines of straighter darker trees,

I like to think some boy’s been swinging them.

But swinging doesn’t bend them down to stay

As ice-storms do. Often you must have seen them

As the breeze rises, and turn many-colored

As the stir cracks and crazes their enamel.

Shattering and avalanching on the snow-crust—

Such heaps of broken glass to sweep away

You’d think the inner dome of heaven had fallen.

They are dragged to the withered bracken by the load,

And they seem not to break; though once they are bowed

So low for long, they never right themselves:

You may see their trunks arching in the woods

Years afterwards, trailing their leaves on the ground

Like girls on hands and knees that throw their hair

Before them over their heads to dry in the sun.

But I was going to say when Truth broke in

With all her matter-of-fact about the ice-storm

I should prefer to have some boy bend them

As he went out and in to fetch the cows—

Some boy too far from town to learn baseball,

Whose only play was what he found himself,

Summer or winter, and could play alone.

One by one he subdued his father’s trees

By riding them down over and over again

Until he took the stiffness out of them,

And not one but hung limp, not one was left

For him to conquer. He learned all there was

To learn about not launching out too soon

And so not carrying the tree away

Clear to the ground. He always kept his poise

To the top branches, climbing carefully

With the same pains you use to fill a cup

Up to the brim, and even above the brim.

Then he flung outward, feet first, with a swish,

Kicking his way down through the air to the ground.

So was I once myself a swinger of birches.

And so I dream of going back to be.

It’s when I’m weary of considerations,

And life is too much like a pathless wood

Where your face burns and tickles with the cobwebs

Broken across it, and one eye is weeping

From a twig’s having lashed across it open.

And then come back to it and begin over.

May no fate willfully misunderstand me

And half grant what I wish and snatch me away

Not to return. Earth’s the right place for love:

I don’t know where it’s likely to go better.

I’d like to go by climbing a birch tree,

And climb black branches up a snow-white trunk

Toward heaven, till the tree could bear no more,

But dipped its top and set me down again.

That would be good both going and coming back.

One could do worse than be a swinger of birches.

Suggested read: If You Haven’t Read Sylvia Plath Yet, Then You Are Missing Out On A Lot!

That is all we have in today’s post on the best poems by Robert Frost. Did you like what you just read? Let us know in the comment section below. 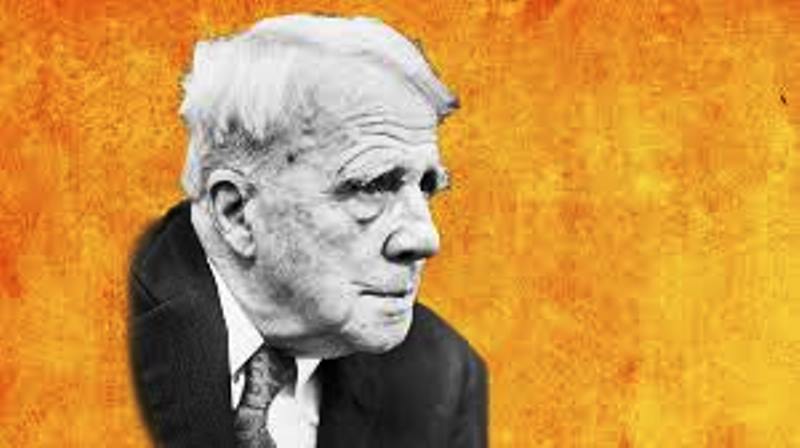