American writer and poet, Edgar Allan Poe, was one of America’s most influential literary figures. His poems captured dark romanticism really well, and he used the theme of the death of a beautiful woman in many of his works. You can find his work being quoted in several movies and throughout pop culture. 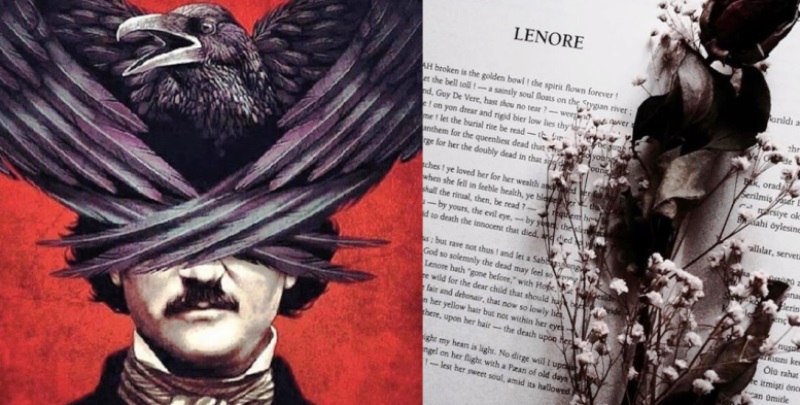 In today’s post, we are celebrating some of Edgar Allan Poe Poems About Love. Hope you enjoy reading them as much as we did creating this list.

Suggested read: Love Yourself Truly With A Li’l Help From These Books!

Once upon a midnight dreary, while I pondered, weak and weary,

Over many a quaint and curious volume of forgotten lore—

While I nodded, nearly napping, suddenly there came a tapping,

As of some one gently rapping, rapping at my chamber door.

“’Tis some visitor,” I muttered, “tapping at my chamber door—

Only this and nothing more.”

Ah, distinctly I remember it was in the bleak December;

And each separate dying ember wrought its ghost upon the floor.

Eagerly I wished the morrow;—vainly I had sought to borrow

From my books surcease of sorrow—sorrow for the lost Lenore—

For the rare and radiant maiden whom the angels name Lenore—

And the silken, sad, uncertain rustling of each purple curtain

Thrilled me—filled me with fantastic terrors never felt before;

So that now, to still the beating of my heart, I stood repeating

“’Tis some visitor entreating entrance at my chamber door—

Some late visitor entreating entrance at my chamber door;—

This it is and nothing more.”

Presently my soul grew stronger; hesitating then no longer,

“Sir,” said I, “or Madam, truly your forgiveness I implore;

But the fact is I was napping, and so gently you came rapping,

And so faintly you came tapping, tapping at my chamber door,

That I scarce was sure I heard you”—here I opened wide the door;—

Darkness there and nothing more.

Deep into that darkness peering, long I stood there wondering, fearing,

Doubting, dreaming dreams no mortal ever dared to dream before;

But the silence was unbroken, and the stillness gave no token,

And the only word there spoken was the whispered word, “Lenore?”

This I whispered, and an echo murmured back the word, “Lenore!”—

Merely this and nothing more.

Back into the chamber turning, all my soul within me burning,

Soon again I heard a tapping somewhat louder than before.

“Surely,” said I, “surely that is something at my window lattice;

Let me see, then, what thereat is, and this mystery explore—

Let my heart be still a moment and this mystery explore;—

’Tis the wind and nothing more!”

The Raven was published in the New York Evening Mirror in January 1845, and almost immediately, it became a sensation. Many reprinted it, some even illustrated it. All of this much earned attention, made Poe a popular poet. In the poem, we see an unnamed lover, who is visited by a raven while he is lamenting his beloved Lenore’s death. The narrator’s agony and miserableness is amplified by the bird which is shown with the constant repetition of the word, “Nevermore”. This experience is slowly pushing him toward insanity he says.

Several folk and mythological references are made in the poem, but what stands out most is the stylized language the poet uses, and the supernatural atmosphere they create. The poem influenced several works which came later like the famous painting by Paul Gauguin by the name, Nevermore.

The ending stanza really haunts you; read it here:

On the pallid bust of Pallas just above my chamber door;

And his eyes have all the seeming of a demon’s that is dreaming,

And the lamp-light o’er him streaming throws his shadow on the floor;

But our love it was stronger by far than the love

Of those who were older than we—

Of many far wiser than we—

And neither the angels in Heaven above

Nor the demons down under the sea

Can ever dissever my soul from the soul

Of the beautiful Annabel Lee;

Annabel Lee was Edgar Allan Poe’s last complete poem. It was published in the New York Tribune on the 9th of October, 1849, two days after which the poet died.

In Annabel Lee, we see one of Poe’s most recurrent themes: the early death of a beautiful woman who was loved. In the poem, the narrator is one of the people who was in love with the woman when he was young, and says that their passion for each other was so intense that angels grew envious of this and caused the death out of sheer jealousy. He also writes that he is still in love with Lee and hopes to be reunited with her someday.

According to experts, Poe wrote this poem in memory of his wife, Virginia Eliza Clemm Poe who died couple of years earlier.

Yet if hope has flown away

In a vision, or in none,

Is it therefore the less gone?

All that we see or seem

Is but a dream within a dream.

In A Dream Within A Dream, we see the narrator question whether his life that is devoid of ambition and hope and love is a dream because it does feel like one. He says that the important things in his life are slipping away from his hands like the grains of sand one tries to clutch, but always in vain. He question whether one can different between the real and the virtual or not.

The last two lines of the poem are the most iconic, and have been quoted in numerous works that followed.

From the same source I have not taken

My sorrow—I could not awaken

My heart to joy at the same tone—

And all I lov’d—I lov’d alone—

An untitled 22-line poem, this was composed by Poe in 1829, after the death of Frances Allan, Poe’s foster mother. The poem did not get published during the poet’s lifetime, and is was first made public in September 1875, titled Alone in Scribner’s Monthly.

Experts believe it to be an autobiography that perfectly expresses the poet’s feelings of being tormented and being alone. The poem is in first-person, and we see the adult looking back on his childhood which was as lonely.

The last line of the poem is what makes it Edgar Allan Poe’s most revealing work ever.

What tale of terror, now, their turbulency tells!

In the startled ear of night

How they scream out their affright!

Too much horrified to speak,

They can only shriek, shriek,

In a clamorous appealing to the mercy of the fire,

In a mad expostulation with the deaf and frantic fire,

With a desperate desire,

And a resolute endeavor

Now–now to sit or never,

By the side of the pale-faced moon.

What a tale their terror tells

How they clang, and clash, and roar!

What a horror they outpour

On the bosom of the palpitating air!

Yet the ear, it fully knows,

How the danger ebbs and flows ;

Yet, the ear distinctly tells,

How the danger sinks and swells,

In the clamour and the clangour of the bells!

This poem diacopically uses the word “bells” to create the necessary musical nature of the work. A diascope is the use of a word repeatedly in a poem with one or more words in between.

The Bells was published posthumously, and can be divided into four sections, namely, the silver bells representing youth and enthusiasm; the golden wedding bells signifying romance and marital bliss; the alarm bells of brass depicting one’s descent into terror and despair; and finally, the iron bells denoting death. Many people have come up with very different meanings of each bell.

That is all we have on today’s post on Edgar Allan Poe Poems About Love And Loss. Did you like what you just read? Let us know in the comment section below.