In the face of the alarming increase in incidences of date rapes and the misuse and abuse thereof – what with false allegations on college campuses and sex scandals everywhere on the rise – Michael Lissack, executive director of the Institute for the Study of Coherence and Emergence has created We-Consent, a sexual consent app that makes use of a 20-second pre-date recorded video clip asking users to verify their name and lock their consent or non-consent for sex. The video recording deploys facial recognition technology to capture images and a microphone to record their voice. The app works only if the cameras detect human faces, and both parties must verbally agree to sex. If one says “no” or cannot be clearly seen, the process ends and the recording is destroyed. 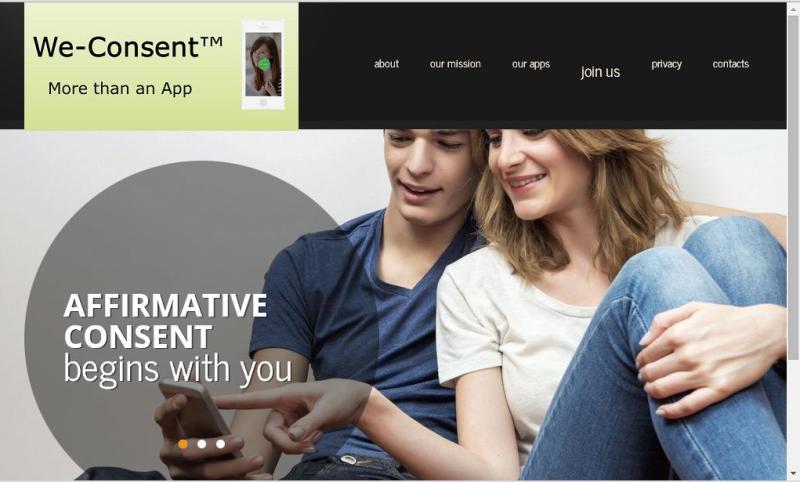 Completed recordings are encrypted and transmitted to a remote server, where they will be saved for seven years. Lissack said the video will be released only to someone who has obtained a court-issued subpoena. Even the people who made the video must obtain a court order to get copies.

As for the origin of the idea, Lissack says that We-Consent was birthed out of his own participation in debates about a sexual assault policy at Harvard University in Massachusetts. He said that it was a pity that in today’s tech-fueled age there was no way to ensure that both parties involved had consented to sexual activity. In his quest for a ‘better way,’ he created We-Consent.

Suggested read: Read all about the ‘Halal’ polygamy app here

According to the website, the mutual ‘yes’ between both parties is “available only to law enforcement, upon judicial order, or as evidence in a college or university sexual assault disciplinary proceeding.” Videos are not otherwise available to users and cannot be hacked, Lissack said.

Speaking with The Chronicle of Higher Education about who his target audience was, Lissack popped a question immediately followed by an answer supplied in a tone that evinced that the response was a blatant one – “Who seems to be mostly involved with scandals? Athletic teams and fraternities.”

However, is We-Consent app really going to change the date rape scene or the sex scandal ratio in athletic fraternities? Sifting through the mixed responses and reviews the app has garnered, we found a lukewarm interest in the app and its intention expressed by a select few including Elouise Beverley, a member of the Royal Holloway, University of London’s feminist society, who told the student newspaper The Tab:

“I think it’s positive to encourage dialogue about consent and I hope this app helps to do that. But the creator’s focus on keeping athletes away from sex scandals seems to encourage the idea that false accusations of rape and sexual assault are more common than they are really. It seems the creator is more concerned with the reputations of perpetrators than the well-being of survivors of sexual assault. However despite those concerns I think checking in to make sure everyone is sober and making informed consent is definitely a step in the right direction.”

Beverley’s opinion seems to capture the ambivalent response that We-Consent deserves perfectly. While a step toward opening a new avenue for open and healthy discussions about ‘consent’ seems a definite winner of an idea, the process that We-Consent deploys to secure the same seems to be missing the point. Completely open to misuse by date rapists who can confirm the ‘complicity’ of the woman they’d not hesitate to brand as the b**ch, or worse, a slut, who has come on the other side shouting ‘rape,’ or vice versa, the app is actually ‘icky,’ as Apple has called it.

Apple Inc. seems to have rejected We-Consent and refused to make it available on iTunes vis-à-vis the actual dissection of the whole ‘ludicrous’ methodology that We-Consent seems to nail in the name of finding ‘a better way’ to the whole consent debate. The inherent problem is that consent isn’t written in stone and We-Consent as an app completely fails to take into account that the fluidity involved in the dating dynamic can allow for a ‘yes’ to turn into a ‘no’ or vice versa. This makes misuse and abuse of the app’s purpose not only possible but all the more probable. The whole contention that a ‘yes’ locked in a 20-second video clip closes and seals the ‘consent discussion’ is not just downright ‘icky’ as Apple has averred, but potentially dangerous!

I mean, sure college campuses, universities, and groups even outside the premises are cracking down on sexual assault, the rapid metamorphosis of the hookup culture into rape culture and its corollaries – but is We-Consent the best solution we can offer? Not only are we opening the doors for a serious misuse of technology to aid and abet crime, despite its much-avowed self-proclaimed assertions of the opposite, but we are allowing the criminals to put a foot through the door and barge all the way in – by making use of We-Consent and forcing, threatening or coercing someone to say ‘yes’ to the camera.

This critical contention is supported by the Rape and Sexual Abuse Support Centre, which slammed the app for apparently showing rape is the result of misunderstanding rather than an attack. A spokesperson for the rape centre said:

“This app seems to completely misunderstand sexual consent as an ongoing process rather than a one-off decision. It also appears to be based on the myth of sexual miscommunication, that rape is the result of a misunderstanding of consent rather than a decision made by a rapist.“

Under the same umbrella, Lissack has launched two other apps called What-about-no and Changed-mind. While What-About-No – a.k.a. ‘the no-means-no app’ – is used when ‘a No message does not get through to the other person,’ the yet-to-be-launched Changed-Mind – a.k.a. ‘the not-now app’ – is seen to be ‘a more gentle way of saying: No, not now.’ The former of the two is available on iTunes.

In order for the apps to be successful, Mr. Lissack believes there needs to be a shift in behavior and attitudes towards sex first and added: “Societal changes do not happen overnight.”

However, as already pointed out, it is in the ‘change’ that Mr. Lissack aims to actualize that the whole problem lies. Lissack said We-Consent is mainly a tool to get couples talking and thinking about the implications of starting a sexual relationship.

“The main point of the app is to change the way conversations happen, not for the app to be used,” Lissack said. “Sometimes we need props to trigger conversations.”

But is We-Consent the prop for preventing the problem or propagating the crime? We are certain that in its ambi-capacity to capture the intricacies and nuances of a serious problem as date rape, it is certainly crippled and incompetent. Until there seems to be really a ‘better’ way to initiate ‘healthy’ conversations that take into account the fluidity of developing dating dynamics from attraction to complicity and real knowledge and retraction of consent or anything in between, we say Lissack, We-Consent is really ‘icky.’

Would you use We-Consent app? Let us know about your thoughts in the comments below.