When the dating app Her came on the online dating scene, it sure did make an entry with a bang. Its CEO and founder, Robyn Exton, is now a precious asset to the Silicon Valley. And the dating app is making waves again, with the trans rights campaign #GiveItARest, started in June 2016. Under the campaign, Her gives away free gender-neutral stickers to anyone who requests them online, in an effort to turn local public restrooms into gender-neutral bathrooms. 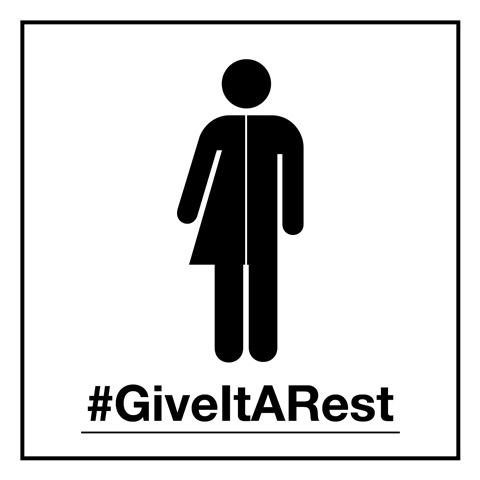 Launched initially after both North Carolina and Mississippi passed anti-LGBT laws, #GiveItARest allows members of the LGBTQ community and those who support them, to take matters into their own hands. Users, once they receive these gender-neutral stickers, can turn any local public restrooms into gender-neutral bathrooms.

Speaking about the needs for gender-neutral bathrooms, 26-year-old Jenelle from Virginia and a Her user, said,

“About once a month at least one woman reminds me, ‘Um, this is the women’s room.’ I’m tired of this, we should all feel safe and comfortable using the damn bathroom.”

To start with, Her produced and handed out only a few hundred stickers. However, now that the demand has surpassed their expectations, with over 8,000 people across the USA requesting them, they are having more of the stickers produced. Interestingly, Her has received requests from abroad as well, including Canada and Brazil.

Talking about the campaign and the need for a campaign like #GiveItARest, Robyn Exton, CEO and founder of Her, said,

“We’ve been overwhelmed by the demand from our user base to help this cause. When we created the campaign, we didn’t expect nor plan for this scale of response.”

“Unfortunately, we ran out incredibly quickly but are currently getting more produced and shipped to keep spreading the word. As an LGBTQ company, we do all we can to protect the members of our community and make sure they have equal rights. We’re going to continue printing the stickers. Hopefully, everyone that orders will receive them and create a gender-neutral restroom – from small hometowns to Manhattan.”

The #GiveItARest initiative is a part of multiple campaigns from Her to encourage acceptance for different gender identities within the LGBTQ community.

And if you want to make your local public restroom gender-neutral, all you have to do is click on the link below to request a gender-neutral sticker from Her. They’d be happy to send one your way!