Did you know the fascinating story behind Karva Chauth celebrations?

My first encounter with the festival of Karva Chauth was in the movie Dilwale Dulhania Le Jaayenge, where an affianced Kajol observes the festival for her beau Shahrukh Khan. I remember bits and pieces of information on the actual festival itself – I admit, I was more invested in what happens to the young lovers than some obscure ritual. Anyway, there was definitely fasting involved, and also looking at one’s husband/fiancé through a sieve after glancing at the moon … or something to that effect.

And since tomorrow, the 11th of October, is Karva Chauth, I thought, why not simply do some research on the festival to learn something new? So here’s what I learned.

Karva Chauth – where and when

Karva Chauth is a Hindu festival which is mainly observed in the Northern and Western parts of our country. This fasting ritual is observed by all married Hindu women praying for the welfare, longevity, and prosperity of their husbands. Even affianced women observe the fast for their fiancés, while some unmarried women do so praying for desired husbands. 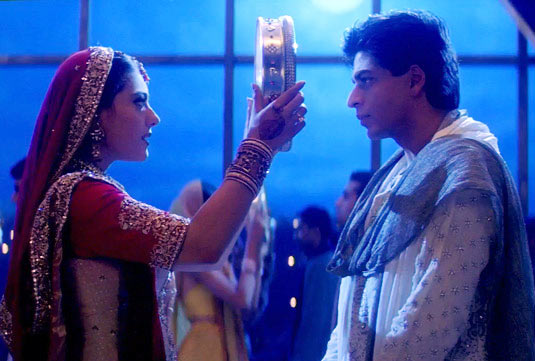 The word ‘Karva’ means pot, and ‘Chauth’ in Hindi means the fourth, referring to the occurrence of the festival each year. The festival is observed on the fourth day of the Karthik month of the Hindu calendar, which falls 9 days before Diwali, the festival of lights.

The ritual fasting that the women do, lasts from sunrise till moonrise of the same day. The women have to eat food early in the morning, usually before sunrise. According to the strict rules of the festival, no food or drink – including water, should pass the woman’s mouth before moonrise. In the evening, nearer to the time of moonrise, all the ladies in the house, or locality, gather together to listen to the Karva Chauth Katha.

Once the moon rises, all the gathered women see its reflection in a thali of water, or through a dupatta, or a sieve. After offering water to the moon, they seek blessings for their husbands’ long lives and prosperity. This marks the end of the day-long fast.

There are many versions of this ‘legend,’ which varies based on who’s doing the telling! The one most popular version of the story is here below:

Long, long ago, so long ago, nobody knows how long ago, there lived a beautiful princess named Veeravati. On reaching the appropriate ‘marriageable’ age, she was married to a king. To celebrate the first Karva Chauth after her marriage, she went back to her parents’ place.

On the day of the festival, she observed all the rituals, did all the pooja for her husband’s well being, including the fast. But the princess, who was now a queen, was of a delicate constitution, and therefore couldn’t handle the rigors of fasting. And by the time evening arrived, Veeravati was too weak, and lo and behold, she fainted. Previously unknown fact – the queen has seven overprotective and loving brothers. These brothers, who couldn’t stand what their darling sister was going through, came up with a plan. They built a fire at a nearby hill, and showed it to their gullible sister as the moon rising for the night. The brothers assured her that it was indeed the moon, and that she could now break her fast. In essence, the brothers deceived their sister.

Anyway, no sooner did the queen eat some food, than she received news that her husband, the king, had died. The heartbroken queen rushed to her husband’s palace. But on her way, she met Lord Shiva and Goddess Parvati, who informed her that her husband’s death had come about because she didn’t observe the ritual to the letter. When the grief-stricken queen asked the Goddess’ forgiveness, she was told that the king would be revived, but would be ill. 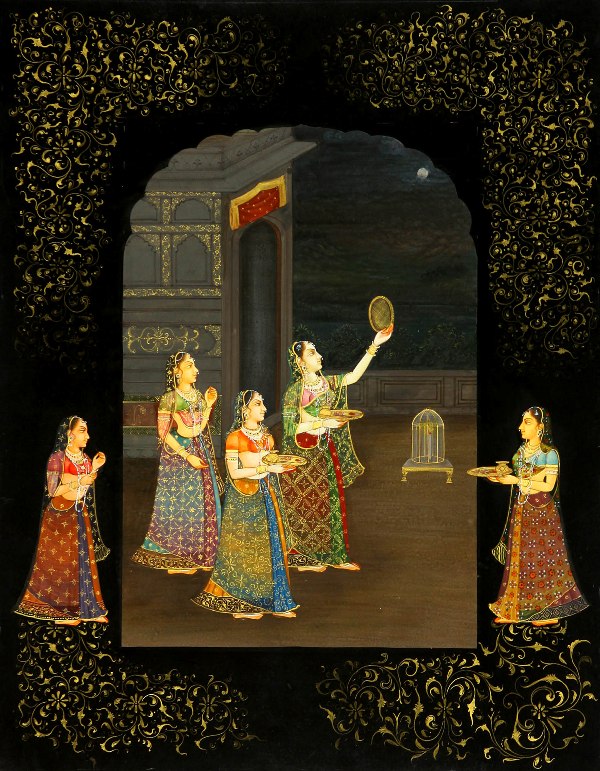 Following her encounter with Lord Shiva and Goddess Parvati, the queen reached the palace, where she found the king lying unconscious, with hundreds of needles sticking out of his body. The queen managed to remove one needle from her husband’s body every day. By the time the next Karva Chauth rolled around, a single needle remained imbedded in the unconscious king’s body.

The queen, determined to get back her husband, followed the ritual to the T. And when she went to the market to buy the karva for the pooja, one of her maids removed the last remaining needle from her husband’s body. On regaining consciousness, the king, mistaking the maid for his queen, relegated the actual queen to a maid.

But, the brave queen Veeravati didn’t lose heart or her faith, but observed the Karva Chauth Vrat religiously. Once when the king was on his way to another kingdom, he asked the real queen, now maid, if she wanted anything. The queen asked for a pair of identical dolls, which the king obliged. But the queen kept singing a song, “Roli ki Goli ho gayi … Goli ki Roli ho gayi,” meaning the queen has turned into a maid, and the maid has turned into a queen.

On hearing this, the king asked her as to why she kept repeating the same song. The brave queen Veeravati then narrated the whole sorry tale from the start. On realizing his mistake, the king restored the devoted queen to her rightful position. It was only due to the queen’s devotion and unswerving faith that she won her husband’s affection, and Goddess Parvati’s blessings.

There is one version which tells of how Draupadi observed the ritual fast, which led to the Pandavas overcoming overwhelming odds.

Another version tells the story of Satyavan and Savitri, when Savitri followed Yama and persuaded him to give her back her husband. Apparently, Savitri was granted three boons by Yama, one, that her aging father-in-law might regain eyesight so that he could rule in his now-dead son’s stead; two, a hundred sons be granted for her father; and three, a hundred sons for herself and Satyavan. Yama, knowing that he had been outsmarted by her, grants all three of her wishes, and Satyavan ‘awakes’  from his death.