Your hearting beating fast when you’re attracted to someone is a classic sign of new love. Whether it really happens to everybody is anyone’s guess.

And now a dating app wants to show two users if their hearts are pounding when they see each other’s profiles! Welcome to 2016!

The dating app in question is Once, which we reported about a few months ago when it was launched.

Currently, Once wants to capitalize on the classic trope of new love – the racing of your heart when you see someone who catches your fancy – to help match you with your potential date. But how does it accomplish this feat? With a Fitbit or an Android wearable, of course! Based on how fast a user’s heart is beating while looking at another user’s profile, Once connects the users. Apart from receiving matches based on a user’s heart rate, a user can see their own heart rate in real time. Plus, Once let’s both parties know that both their hearts were racing while looking at each other’s profiles. 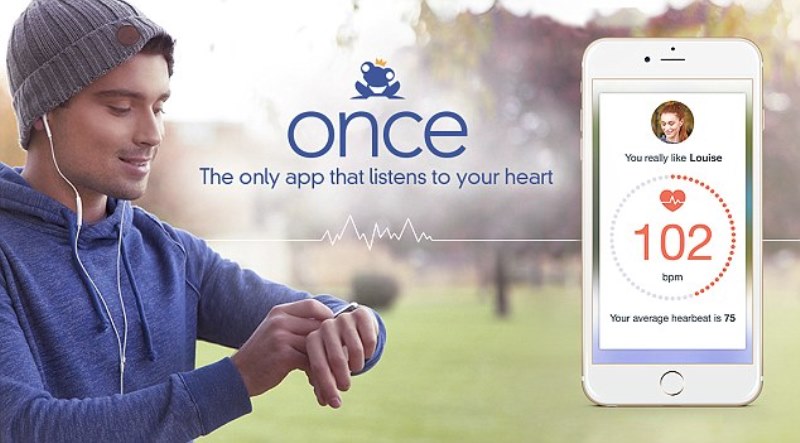 As mentioned in the original article, Once dating app sends a user one potential match every 24 hours, forcing a user to either interact with the person or lose out on who could potentially be their soul mate. The precious one match per day are handpicked by human matchmakers from the app’s end, based on the information that is populated in a user’s profile.

This one match per day at noon has worked out in its favor for Coffee Meets Bagel, another dating app, which was launched by three women entrepreneurs. This feature cuts down on the swiping frenzy that has seemingly taken over the online dating world, making snap judgments, based on a (shady) profile picture and a few words in their profiles.

The CEO of Once, Jean Meyer, told The Telegraph,

“Technology has changed the way people date. You can talk to people at bars, pubs, parties, weddings and so on. However, you can also sit at home and just ‘like’ profiles on an app. There are two different approaches now. That’s why we created Once.”

Suggested read: Dating app Once provides on match every 24 hours – only!

“We think our app combines this real-world magic of meeting someone for the first time, but in a format that people are familiar with. It’s a great mix of traditional and contemporary dating.”

The dating app Once is currently available in Europe, with about 600,000 users already.

Here’s the video of the new heart rate feature that Once introduced:

Article Name
Dating App Once Uses Your Heart Rate To Find You A Partner
Author
Chaitra Ramalingegowda
Description
Dating app Once, which has human matchmakers picking potential matches, has introduced a new feature that considers a user's heart rate to find them love!