10 lies your girlfriend is definitely telling you

Whilst penning down the ‘10 lies your boyfriend is definitely telling you’ was super-fun, writing this one might come back and bite me in the rear later! 😉 Yes, I am a writer and this is my job! So … because I signed up to be honest with my dear readers, here I go.

Honesty is not always the best policy to follow when it comes to our darling boyfriends. Just like he’s lying when he says we’re looking fabulous in that red dress we spent five hours to decide on, it is okay for us to lie about that greasy thing he puts in his hair. I mean c’mon, you don’t think we’d tell you exactly how we feel about that fart under the blankets (which btw, is hilarious to you!), your PMS jokes, your sexist posts and most of all, what we think of your mother, right! 😛

Suggested read: 10 reasons why your pet is better than having a boyfriend!

So, yes, we lie and here are the all-time classics we just cannot do without:

Now, whether this one has come as a text message or the last line she said before hanging up or god forbid, in person, it only means one thing – it is NOT okay! So, whatever it was that you two had been texting/talking about, press the ‘replay’ button and find out what made her say the most ‘dangerous’ lie of them all! Trust me, it is the ‘baap’ of all lies and the only time we’re faking an ‘it’s all okay’ act is when the ire of all the volcanoes in the world is seething within us waiting to explode! And if you try and justify what has actually incurred the wrath, be prepared to have the raging lava-invectives come pouring out on you (yes, including everything you did wrong today, yesterday, a week ago, a month ago, and since the time the two of you met!). Unfair, you say – well, that’s just how it is. Deal with it or date a boy! 😛

Not that she does not want you to go out and have fun, just that she is secretly hoping it isn’t ‘too much fun.’ Yes, she has her girls’ night outs too and therefore, can’t be all riled up if she accepted that free drink from the guy chatting up her bff. You wish! She can be mad even if she sent you out for some ‘fun,’ coz women are just wired like that. If you do not come home saying, ‘I missed you babes,’ or she learns that you played wingman to that (in-her-mind-OBNOXIOUS) Abhay (and were therefore, picking up hot chicks – by proxy), she WILL be mad and you can bid the ‘sex’ nights a good ‘hasta la vista’ for a week.

We love this one. And guys, you should take care you don’t fall for this one. (Oh my! How odd does it feel to show all our aces of the game! :P) We use this one so that you spill the beans and we get to know whatever-the-heck it is that you’d been trying to brush away under the carpet. Plus, it gives us double advantages. We get mad (yeah, these are lies we’re talking of, remember?) and therefore, you try and make up. Plus, we store away your confessions in our ammunition arsenal to use for future fights and squabbles. <wicked grin>

Suggested read: 7 things every guy should do to be the perfect boyfriend

Translation: I’m livid and you better run for the hills before my veins burst with all the anger that is coursing through them now! Now remember, you can’t dash off in the opposite direction because then the argument would be how you don’t give a rat’s behind about her feelings. Either way, you are at a dead end and your only savior would be God! Although, I have my doubts about that too – after all it’s a woman’s anger! 😉

Suggested read: 9 easy ways to support your partner during her periods

5. I love you just the way you are

Now this is a huge one!! Of course, she’d like to change a lot of things about you – maybe even everything! It could be something as trivial as the color of the cushions in your living room to something as ‘ego-blasting’ as the way you use your tongue when you go down on her. Of course, she thinks that the not-so-changeable traits far outweigh the absolute non-negotiables, and that is probably why she’s sticking around. But with whatever expertise I have on the matter, I will say “give it time and you may wake up one morning-man-scaped!!” 😉

6. Of course, forgiven and forgotten

Now, in guys’ minds the words ‘forgive and forget’ are like bread and butter. In women’s minds, more like ‘oil and water.’ When she uses this one, you may be thinking, ‘Wow, got this one off my a** quick,’ but she’s busy storing ‘YOUR’ mistake on her ROM. So, whether or not you power her machine some couple of weeks later, if she’s being affected by one of those frequent mood swings, she’ll come hollering into the living room and ruin your scratching yourself in the n**ts plus game-watching experience by throwing this apparent long-forgiven matter in your face. And you thought, forgiven and forgotten really meant what it means in the thesaurus for her, eh! Well, women’s dictionaries are different dude! 😉

Now, to blast this one and come out in the open about this lie is to aim below-the-belt. But okay, for you dear readers! If she’s telling you this, it is only because she knows how the male species is ‘touchy-feely’ about their man-meat. I mean, I’m yet to meet the female-version of ‘satyavaadi Harishchandra’ who’d push away the sweaty beast heaving over her and thrusting into her with a ‘Get off of me, you dumb-witted a**h**e. You go poke your weenie into a sack.’ Does not happen. So, yes, this lie shall stay fellas! And if you push it too much, (and we mean if you press the matter too much … ohh the dirty minds!) be prepared to hear the most elaborate lies about why all the others she’s been with were nothing compared to you. And oh, by the way, she will lie about the number of men she’s been with too! :O

Yes, we know being ‘needy’ isn’t cool. And therefore, we’ve built this one. We use this one when we know any attempts to tether ourselves to you shall have you dash to the airport to board the next flight to Antarctica (or maybe Bangkok?!? 😉 ) and we sure as hell can’t afford that! So the solution – put on the ‘let’s-go-with-the-flow’ act! It’s easy, coz hey, we’re all born actresses! 😉

Yes, in a minute after four hours of picking an apt dress, an hour of putting it on, an hour to change again if it doesn’t feel right, a couple more to be mad because you gave the ‘wrong’ answer to how the dress looked on us (btw, there is no ‘right’ answer, none that is true, anyway!), a half hour spent making up to us, a couple more for make-up and accessorizing, and yay, we’re ready! What, we missed the concert?! We told you not to watch the game last night, you’d have woken up earlier! <mental blackout>

Suggested read: How to choose the right hair brush for your hair

Bonus lie: Your friends are so cool!

Yes, we love your roommate from college who still follows the once-in-a-week-shower rule, your best friend who insists on singing in his not-so-melodious voice on every hang-out, the one who got dumped by thirteen chicks in five years and therefore, is a talking-walking sexist-slang machine and not to forget, the sleazeball who checks me out on the sly every time you leave to get us another round!

Suggested read: 10 valid reasons why you shouldn’t be friends with your ex

There’s no reason to un-love them right!

Now that you know about the lies we use, I will leave you with a piece of very important advice. Next time any of these come by, just roll with it. You’re better off without the ‘You-think-I-lie-to-you’ before-break-up drama! 😛

Just be glad she loves you, coz hey, you lie as well! There’s no ‘honesty agreement’ drawn up right! 😛 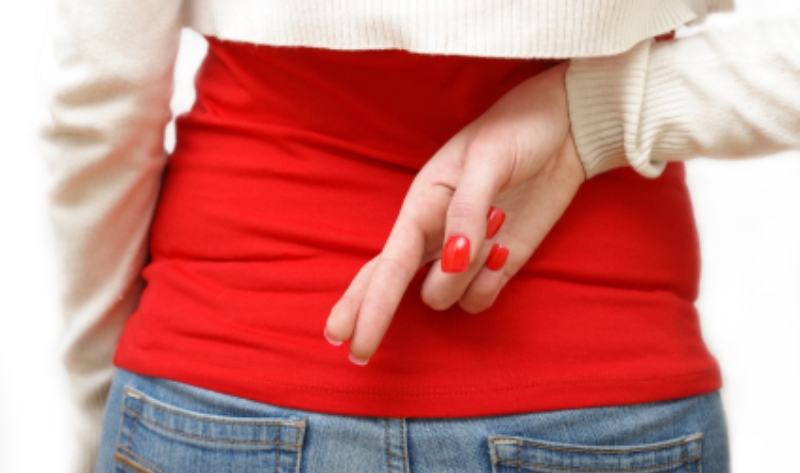