13 Hilarious Ways To Get Out Of Plans

Sometimes we end up saying yes for plans which we’d never turn up for! So, if you, too, have that irresistible itch to be nice and can’t, for the love of God, say NO but have no qualms bailing out last moment- take some cues from these hilarious ways to get out of plans:

1. My cat is in depression

“The poor thing just just sits there near the window looking up at the sky meowing in a low sad tone incessantly. She won’t even have her milk; yesterday I made her favorite tuna preparation and she didn’t even touch it (add a deep breath and sigh after this sentence). I’m afraid if I leave her alone in her time of need, she might do something stupid like jump out the window and run away or worse!—roll the ball of yarn around her neck and…… oh I don’t even wanna go there!” <add tears>

2. I have to finish Pretty Little Liars!

“Who is A?! I’m just dying of suspense here. I’m in the last season and this weekend I plan to finish it all and finally know the truth, you understand how important this is, right? As soon as work finishes I’m out of here!”

While holding your back with a pained expression on your face say these words: “My back is just completely messed up—I think I’m getting too old for anything now; I was just making myself a cup of coffee and as I reached for the spoon to stir, it fell to the ground and as I bent over to pick it up, I heard a snap and felt a shooting pain and since then I’ve been stooped over like this—now I know how grandma feels!”

4. The case of the Loosies

“Oh god! (Looking exasperated) I shouldn’t have eaten that roadside pakoda yesterday, this is the fifth time I’ve been to the washroom today, I gotta tell you it’s all liquid with the strangest combination of colors (throw in a combo of brown and yellow maybe a bit of green too!) along with the sounds of a trumpet and the smell ugh—that reminds me, PLEASEEEE don’t use the loo for long. Oh no here it comes again I gotta go!”

Trust me, you are in the clear with this one, no one will want you around with poo poo!

Keep a very casual expression on your face like this is something that is just so ordinary—“No man, not this Friday, I have to talk to my aunt the one who passed away last August. She visited me from time-to-time but of late, she hasn’t called and I want to catch up.”

“Oh damn, I’d love to come but my appointment’s this Saturday. I keep telling my mom it’s not a big deal that I talk to myself most of the time- lots of people do that, or that I hear voices in my head and like taking walks in the cemetery in the dead of the night with nothing on but just a pair of boxers holding a candle, but she insists I go, moms, I tell you— you can’t have your way with them!”

Make sure you sound hyper excited while you say these words: “Oh yes, absolutely. I’d love to come but I might be a bit late as I’ll be picking up a few (ahem ahem come closer to them while saying this) “supplies” if you catch my drift. My dealer has the best stuff in town guaranteed to blow your mind, you see I need my fix at least five times a day otherwise I just can’t function! Hey, why don’t I get an extra bag, we can distribute it to all your friends and family at dinner what say?”

The person will surely tell you plan’s cancelled the next day!

“I’d love to but I have this weird growth on my skin- it’s itchy with a weird reddish colour, a little above my ass and it seems to be growing by the day. I was thinking of getting it checked by the doc this weekend, you wanna see it?”

At this point start unbuttoning your pants, the person will stop you then and there and tell you to go to the doc instead!

9. My psychic told me I’m going to die

“Alas, the day has come( looking very sad, almost in tears) I was told by my psychic I’ll be dying sometime this week so I can’t come for your dinner party. I don’t wanna ruin it for everyone in case my time is up and I end up falling face down in my food—you go on without me—live!”  <sobs>

“Is it ok if I bring a plus one? You see I’ve been dating my brother, well step-brother for six months and we like going everywhere together, we are inseparable just can’t keep our hands off each other.” *blushing and giggling*

You really gotta act well for this one: “Oh no, I just can’t, I can’t eat, I can’t breathe, I can’t live without him. *teary-eyed and stammering* I just need to be alone right now, I don’t think I can bear to be around anyone please leave me!” * followed by a dramatic exit*

12. The weather’s just not right

“Ummmm, well no I’ll have to pass,it’s just way too cold outside and I don’t think I can make it with these frigid temperatures. It’s bad for my heart and soul and did I mention I also am highly anaemic!”

Suggested read: You’ll get SERIOUSLY hurt if you say these things on a first date

“I have this thing I don’t quite know what it is but it looks weird and smells even weirder and I’m pretty sure it’s contagious because now my hamster has it too and I was playing with him yesterday; so I think it’d be best I stay home and avoid human contact.”

And you thought it was tough to get out of plans! 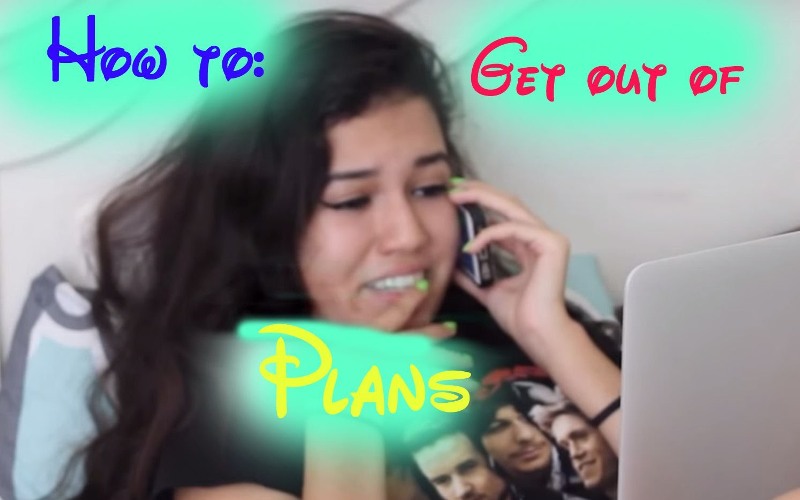 Article Name
13 Hilarious Ways To Get Out Of Plans
Author
Ria Dutta
Description
And you thought it was difficult to get out of plans!