Chhaupadi – the archaic tradition around menstruation

When I reached puberty, my life changed – and not for the better. Suddenly, there were restrictions as to what I could do and what I couldn’t. Well, mostly the latter. During the days of my menstruation, I couldn’t enter the pooja room in our home, I couldn’t go to temples, I couldn’t touch certain foodstuffs which might be spoiled by my touch, and so on. And I had to wash my hair on the first and the last days of my period before I did anything else, apparently to wash away the “taint” from my person.

These restrictions that were imposed on me since I was a teenager, have been so ingrained in my psyche that I find it hard to scoop out these archaic and antediluvian notions and ideas, even now that I’m in my late 20s. However, this is mild compared to what others of my acquaintance have and do endure monthly. In addition to the abovementioned restrictions, some women aren’t even allowed to enter the kitchen during their period. And even some women aren’t allowed to touch their husbands.

Even in this day and age, our society hasn’t come forward to eradicate this antiquated and misogynistic practice in the name of tradition and custom, and young girls are made to feel ashamed of their own bodies and their natural responses. If a woman doesn’t go through her menstruation, there would be no furthering the human race. I think that this impurity spiel is one of the ways a woman is made to feel inferior to men. That she is “impure” for a few days every month. We girls feel so ashamed of this natural bodily function that we even hesitate to ask for sanitary napkins at a convenient store without blushing, unless there’s a lady at the counter.

What a load of horseshit!

And if you think what I’ve described till now makes your blood boil, wait till you read what our neighbors to the North, the Nepalis, subject their women to, during menstruation. It takes the cherry on this pile of horseshit cake. 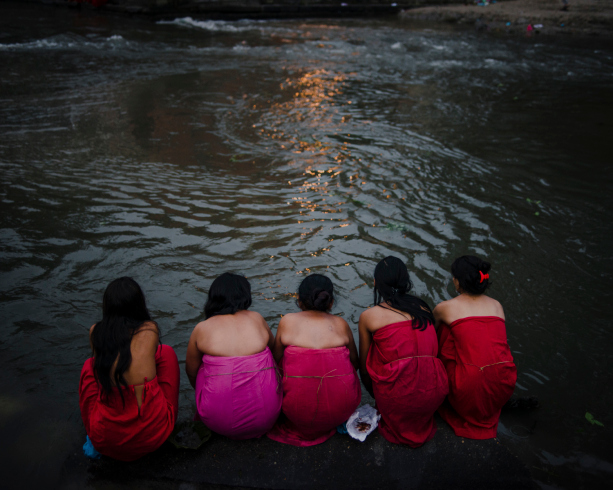 Women washing away their ‘sins’

In some parts of Nepal, a tradition is followed, called Chhaupadi. Girls and women are made to live in makeshift huts on the outskirts of the village, since the tradition prohibits them from participating in normal family activities during menstruation because they are considered ‘impure’. When a girl has her first period, she has to stay at one of these huts for ten to eleven days, and thereafter, the duration is between four and seven days a month. Apparently, even childbirth will win you one of these huts for a ten to eleven-day trip to these huts. Yay! The joy of having a baby!

And it’s not like those huts are kitted out for comfort. They’re usually open huts, which are otherwise used to shelter cows and goats, with little to no shelter from the elements. Many huts have dirt floors, no windows, and no water, making them highly unsanitary, not to mention uncomfortable, when the women might suffer from cramps during the period. Since they are way out in the middle of nowhere, there is danger from snakes and other two-legged predators who might kidnap and/or otherwise sexually assault these vulnerable girls and women. The temperatures can vary from -11 degrees Celsius in winter to 48 degrees Celsius in the summer months. These women aren’t even allowed to use warm blankets but for a small rug made of jute to keep themselves warm. 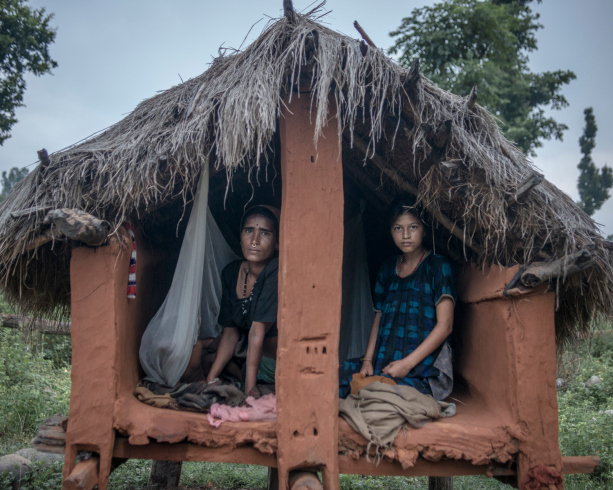 Women in the Chhaupadi hut

Although the country’s top court ruled this medieval practice illegal in 2005, the memo hasn’t trickled over to the remote ex-Maoist district of Surkhet and Achham in the far West, which is only reachable by foot – the origin and devoted observer of this tradition.

The women are banned from any kind of socializing and sharing of food, are isolated from their families, including feeding newborn babies, forced away from public spaces, and barred from using the main water source. And if a woman were to have any complications during or after childbirth, she would have little to no chance of getting the help she needs. This dangerous tradition has surely sky-rocketed the maternal and child mortality rates there.

To add insult to injury, during this time, women are forbidden to touch men who might become ‘ill’ from their touch, or even to enter the courtyard of their own homes, or even read a book about Goddess Saraswathi, the goddess of education, who will become angry, or touch a tree, lest they never again bear fruit. And at a time when the lady’s body requires all the nourishment that she can get to replenish the blood that she loses, they are banned from consuming milk, yogurt, butter, meat, and other nutritious food, for fear that they will forever taint those goods. These women mostly survive on dry foods, salt, and rice, which are mostly thrown at them from a great distance from their non-menstruating relatives, to avoid getting ‘tainted’ by their impure condition. 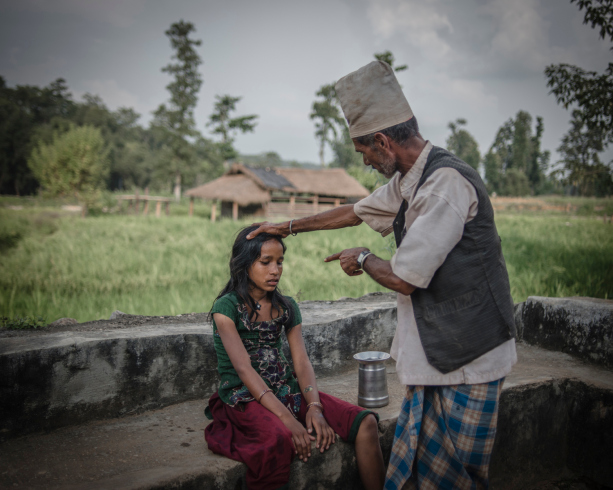 A traditional healer beating a woman

Documentary photographer Poulomi Basu, currently based in New Delhi, has witnessed this ritual firsthand, and photographed girls and women subjected to Chhaupadi. Each girl and woman she encountered endured unique circumstances. One girl lived in a hut filled with books, trying to study, while exposed to the elements. Another was in such pain that she had to crawl to the toilet outside. And in one instance, Poulomi witnessed a traditional healer beating a girl in front of two dozen men. There was little she could do. “[This] has an extremely high impact on women’s physical and mental health,” Basu said. “Their self-esteem is completely crushed.”

It is high time that this antiquated, outmoded, archaic, misogynistic, and positively medieval practice is put a stop to immediately. And we women stop feeling ashamed of our bodies and their natural processes. 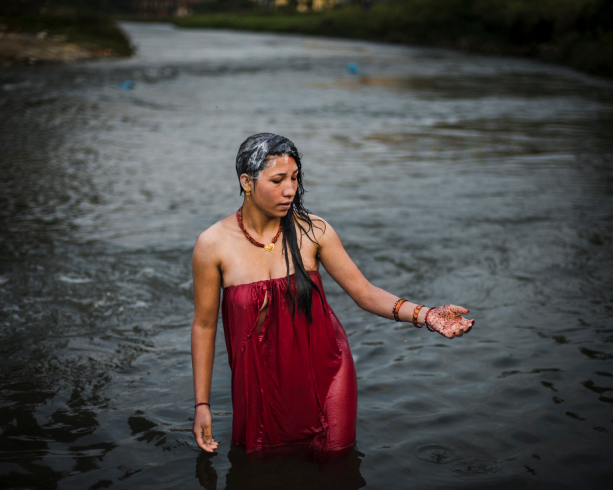 Article Name
Chhaupadi - archaic tradition around menstruation
Author
Chaitra Ramalingegowda
Description
Nepal still observes a tradition - Chhaupadi - of isolating women in huts with no safety or comforts during their menstruation cycles and childbirth.