Does Media Play A Role In Perpetuating Violence Against Women? Let’s Find out

Recently, we were shaken to the core when a Moroccan state TV broadcaster aired a makeup tutorial that spoke of ways one can conceal marks of abuse using makeup! Yes, you read that right.  Channel 2M, which publicized this segment, had in their transformation chair, a woman whose face was made to look puffed-up and injured. The task taken up by the makeup artist was to help mask these injuries with a little makeup, so that women could ‘go on with their lives’, after an episode of domestic violence. The Washington Post translated the instructions given in Arabic to English, and a segment of the tutorial read,

“After the beating, this part is still sensitive, so don’t press.”

“Make sure to use loose powder to fix the makeup so if you have to work throughout the day, the bruises don’t show.”

Suggested read: Domestic violence – are women the only sufferers?

This video received a lot of backlash from activists on social media. People took to Twitter to call the tutorial infuriating, disgusting, horrendous, physically sickening, among other strong words. Responding to these reactions, the channel issued an apology. But can you really pardon them, for such an insensitive broadcast? No. But was this the first time that someone portrayed domestic violence, insensitively? No. Is this the first time the media devalued women and violence against women? No. So why don’t we call out foul each time such an incidence occurs? That’s because, more than often, the bias is not explicit, and we fail to identify it. For example, the use of humor to devaluate a woman’s physical characteristics, or a funny portrayal of domestic violence, like when BPA Fun Center ran this advertisement in the US: 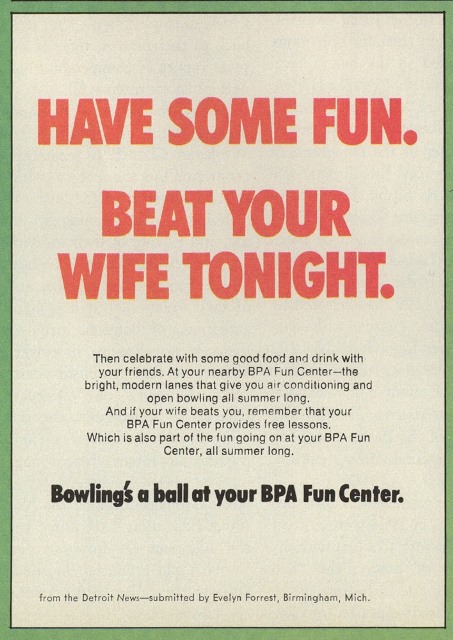 Was this the best pun that they could think of?! 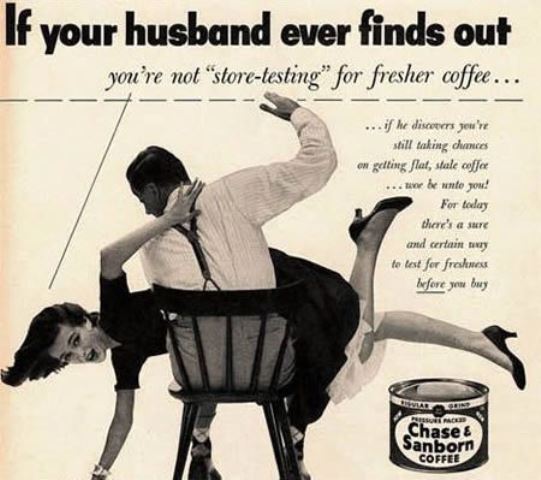 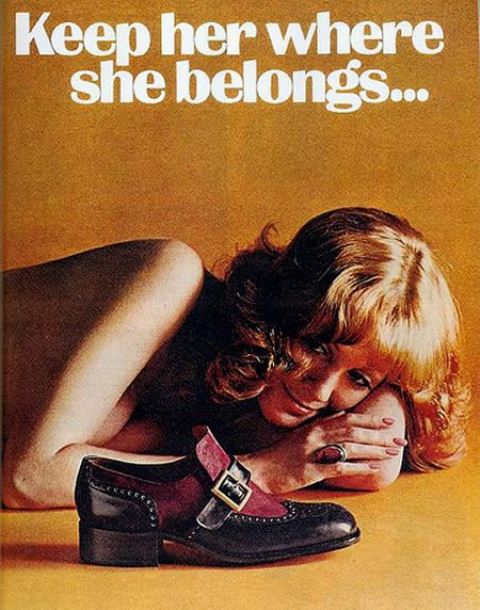 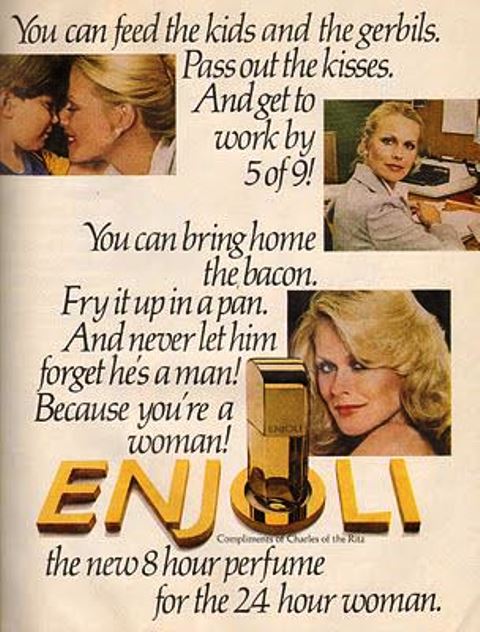 Examples like these are galore, and I am going to share a few with you, to show how humor is, at times, a form of sexism, and how that, in turn, can make discrimination and violence against women appear more publicly usual. Also, how a woman responds to the joke is seen in a very sexist light. If she stays mum, it is assumed that she is party to the whole idea of bigotry, but if she retaliates, people accuse her of not having a sense of humor! I mean how crazy can we get here!

The world of today has become a scarier place for women than before, and we have good reasons to believe that. According to surveys conducted a couple of years back, around the globe, 10 to 70 per cent of women have reported a physical attack by a close male partner, during some point in their life. 40 per cent of these attacks were of a sexual nature. In the US, for example, one of every four women reports an incidence of domestic violence in their lives. At least 4 of 5 women around the globe have been stalked, physically or on social media, at least once in their lives. These startling prevalence rates have revealed that today one can call violence aimed at women, an epidemic. These numbers are heart-wrenching, but what is worse is how there is an attempt, through the way a news is covered or the theme of an advertisement or the lyrics of popular songs or sexist language served in the form of humor, to normalize chauvinism. There are a number of television commercials, TV shows, mag adverts, etc. that have facilitated the acceptance of sexism in mainstream society. We will take these, one at a time. But before we do that, let us have a look at the cultural mechanisms and family structure that helps in the normalization and perpetuation of domestic violence.

Culture as a tool to preserve domestic violence

The customs and traditions followed by a number of societies throughout the world, regularize domestic violence. A society’s understanding of gender roles and their manifestation in a marriage, is the most influential factor motivating the social acceptance of domestic violence against women. In many Arab cultures, women are believed to “be in the right place” when in their husband’s control, because it makes her exist the way he wants her to. I used the word ‘exist’ as opposed to ‘live’, because do you really think these women are living their lives?! In the Hispanic culture again, the common notion of machismo, helps standardize the occurrences of domestic violence. According to this notion of ‘masculinity’, men are supposed to be aggressive (sexually or otherwise), dominant and controlling of their wives. Women, on the contrary, should be pure, subservient to their ‘lords’ and should endure any degree of misery and pain, for the good of the family.

In Vietnam, the women folk are expected to always preserve a peaceful atmosphere at home; this is often to the women’s own detriment, which in turn, reinforces cultural expectations of the man maintaining control over his woman.

Moreover, in most cultures there is a tendency to prioritize the good of the family over the good of the individual, who, in majority of the cases, is the woman of the house. This attitude prevents the victim from speaking out or seeking outside assistance or treatment. In some cultures, there is an absence of common terms to help understand domestic violence. For instance, in Russian, you cannot directly translate the phrase, ‘domestic violence’. This complicates the understanding of the phenomenon of physical and sexual abuse faced by women within Russian families.

How the family structure perpetuates the cycle of domestic violence

The family structure is responsible for prolonging the cycle of domestic violence. This is, particularly true, when the victim is financially or otherwise dependent on the abusive partner.

Media reports, through repeated exposure, have desensitized people’s perception of violent behavior toward women. When there is prolonged and recurrent exposure to domestic violence, psychologists say, changes occur in the affective, reasoning and behavioral processes of the brain. Due to these changes, people develop insensitive reactions to incidences of domestic violence, which, in due course, fosters public tolerance of violence.

The most recent example of underlining sexist language in an advertisement is Ranveer Singh’s Jack and Jones ad, where we saw him pick up a mini-skirt clad female on his shoulders with the tagline, “Take your work home.” This sort of glorified masculinity tries to objectify women, and suggest that women get ahead in their professional careers by sleeping with their bosses or colleagues. And these are just a few interpretations that trigger a cycle of discrimination, further firming up the system of gender inequality. 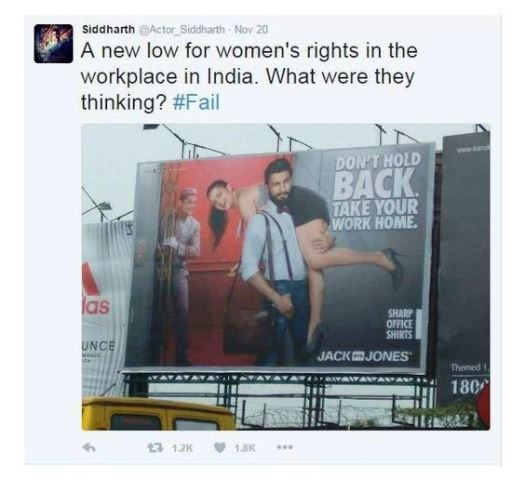 Television shows too, help socially stifle the sensitivity toward domestic violence. For example, CNN a few years back ran a story about how students of a community high school recreated Chris Brown beating up Rihanna, through an act at a homecoming rally. This, according to the students, was supposed to be funny. It was difficult for them to understand why the community took offense. In fact, they were expecting an applause!

These kind of instances show how people think domestic violence is a joke and something you can laugh about, and this trend is worrying. These, moreover, work as tools to establish inequity of power and control in relationships.

Some songs have taken objectification of women into the territory of misogyny. Whether it was Maroon 5’s Animal, with words like, “Baby I’m preying on you tonight / hunt you down, eat you alive / just like animals, animals, like animals…”,

or the ridiculous, Super Freak by Rick James that had the following lines,

“She’s a very kinky girl, the kind you don’t take home to mother. She will never let your spirits down, once you get her off the street, ow girl. She likes the boys in the band. She says that I’m her all-time favorite. When I make my move to her room, it’s the right time. She’s never hard to please.”

Bollywood is not far behind when it comes to promoting a culture of gender subjugation, subordination and inequality faced by women in India. Bollywood churns out almost a 1000 movies a year, and has a viewership of 50 million people, approximately. The film industry reaches more people than any cultural phenomenon, and therefore, you can imagine how they can influence the minds of the people. So why doesn’t Bollywood take upon itself a responsibility to sensitize people about gender or domestic violence or other issues that need immediate intervention?? That’s because Bollywood is business, and nothing sells better than sex. I mean, how would you, otherwise, explain the popularity of item songs, which are, more than often, off-plot? I am not a hypocrite, and I would like to accept and apologize for the fact that I too have danced on songs like “Gandi baat” or “Fevicol se” when played at gatherings. I did not realize, until very late that I was, in a way, advancing my support by not complaining and thinking, “Oh! It is just an upbeat fun song!” Well, it is not. It is an ITEM NUMBER. The woman dancing in the song is referred to as an ITEM GIRL. If this isn’t objectification of women than what is?!

When we enjoy and have a ball on these numbers with our friends and family, we don’t process that this is having a reflection in our real lives. And as a result, objectification is normalized.

Suggested read: The dos and don’ts of being there for someone facing domestic abuse

Sexual violence or the factors that result in sexual violence, when trivialized in advertisements or songs, lead to increase in assault and rape, which further enforces a patriarchal, unequal system. The long-term effects might even include society totally accepting the sexual ridicule, violence, and hatred faced by women. Isn’t even the thought of it tormenting? Well, if you don’t want that to happen, you have to start taking actions right now. Increase awareness about the seriousness of the situation. You need to alter the perception of gender roles and amend the social constructs that disseminate sexual violence faced by women. Do it before it is too late. 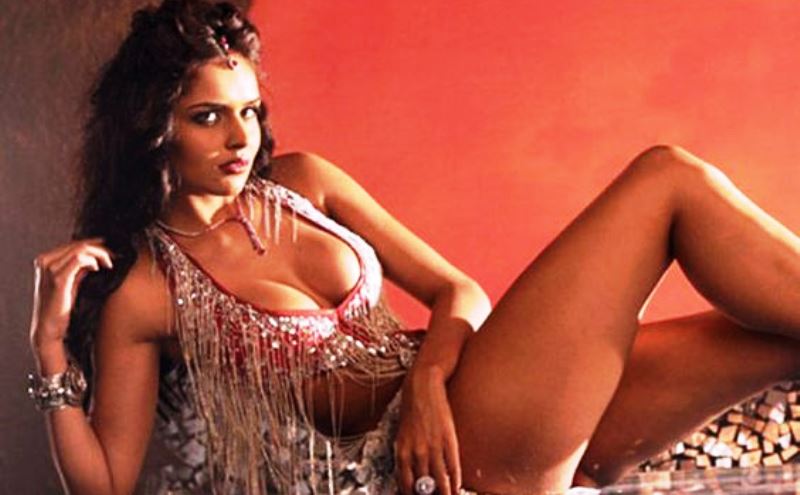