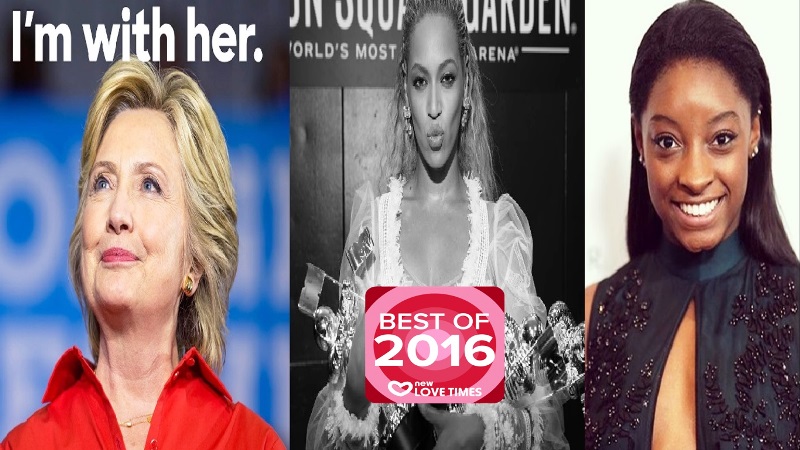 Scroll down for the top 10 moments that made women, all over the world, very very proud.

Yes, Clinton was not voted the first woman POTUS, but she did cause major crack in the glass ceiling by becoming the first female presidential nominee of a major party in the US. At the DNC, after the historic nomination, Clinton said,

“When there are no ceilings, the sky’s the limit. So let’s keep going, until every one of the 161 million women and girls across America has the opportunity she deserves. Because even more important than the history we make tonight is the history we will write together in the years ahead.”

2. Through a secret Facebook group dedicated to Hillary Clinton, millions of women unite

The news of Hillary Clinton losing to Donald Trump in the US Presidential Election, threw millions of women into a deep pool of mourning. These women then, flocked to Pantsuit Nation, a secret FB group, to stand united against bigotry and hatred. The group today has around 4 M members who are trying to gather support for the creation of a safer place for not just women, but the LGBTQ folks, immigrants and other marginalized groups, who are scared of what might happen to them in an administration run by Trump.

After Trump insulted Hillary Clinton during one of the presidential debates, calling her a “nasty woman”, feminists around the world, who too have been insulted in a number of ways, for being opinionated and ambitious, called out the bully. We saw memes of Clinton and lyrics from Janet Jackson’s song, Nasty, do the rounds.

Yes, Trump has won, but nasty women will continue to fight against patriarchy and make sure their voices are heard!

Bringing back attention to the Black Lives Matter movement, Beyoncé gave a stirring performance of “Formation” at the Super Bowl half-time show.

Later, she released “Lemonade”, which was called the best album by Rolling Stone, and a “revolutionary work of black feminism”, by Billboard.

Lady Gaga performed, “Til It Happens To You”, at the Oscars, with 50 survivors of sexual assault. Gaga, who herself is a survivor, was introduced to the stage by Joe Biden, the Vice President of U.S.A., who has led a countrywide initiative to fight sexual violence on college campuses.

“In the military, a combatant command is the ultimate job. It’s the pointy tip of the spear, overseeing the people carrying the rifles and flying the aircraft. Northern Command, created the year after the 9/11 attacks, is also prestigious because it protects our homeland.”

“For years, women were barred from combat roles, closing off their route to the senior leadership. Gen. Robinson’s appointment makes clear to every female lieutenant that the top jobs are now open to them.”

With Trump being elected the next U.S. President, the historic abortion ruling by the US Supreme Court is in peril. Yet, it needs to be mentioned that in a landmark ruling this year, the US Supreme Court, protected abortion rights by looking into a Texas law that put undue burden on women seeking abortion.

This year, Amy Schumer was ranked fourth by Forbes on its list of highest-paid comedians. In 2016, Amy also became the first female to headline Madison Square Garden.

The 19-year-old, Simone Biles, who debuted this year at the Olympics, became the first U.S. gymnast to ever win four Olympic gold medals. The New Yorker hailed her as the “greatest gymnast of all time”.

This year saw a rise of Islamophobia. But the silver-lining was to see mainstream mags embrace women in hijab. We saw Noor Tagouri become the first woman to feature on Playboy magazine, donning a hijab. Dolce & Gabbana, on the other hand, started a line of hijabs and abaya, for Muslim women.

Suggested read: #WorstOf2016 The worst songs of 2016 that made our ears bleed!

Jill Soloway yells “Topple the patriarchy” at the Emmys

Accepting the Emmy for “Transparent”, a sitcom about a transgender woman, Jill Soloway, said,

That’s all we have on the top 10 kickass feminist moments of 2016. For more on the best and worst of this year, keep your eyes glued to this section!g