Did you know that one in three women have been victims of physical or sexual abuse at some point in their lives? That’s how prevalent violence against women is all around the world.

A novel initiative by dating app Happn wants to expose violence against women, and we couldn’t be prouder about it.

Happn dating app has teamed up with Equality Now, a global nonprofit, and launched the “One in Three” campaign yesterday, as part of International Women’s Day to raise awareness about how many women are survivors of physical and sexual abuse. 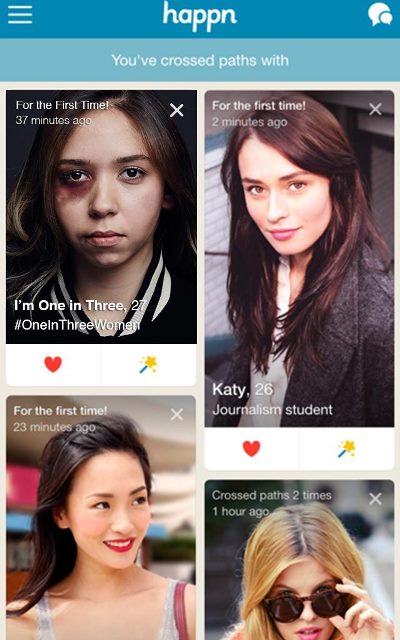 Happn, which is a location-based dating app, connects users based on who they’ve crossed paths with. And it will include special profiles with battered and bruised women who have survived violence alongside real ones of other users on the app.

These fake profiles of bruised women are intended to showcase the fact that any woman, even one you’ve crossed paths with, could be a survivor of physical or sexual violence. Of course, not all abuse is apparent or leaves marks on the body, but this initiative is sure to throw light on the touchy yet very important subject of violence against women.

The pictures may seem too graphic or too in-your-face or too crude, but the fact remains that one in three women are survivors of violence. And there is no denying the fact that although it seems shocking, it is one way to clearly send out the message that women are still being abused. 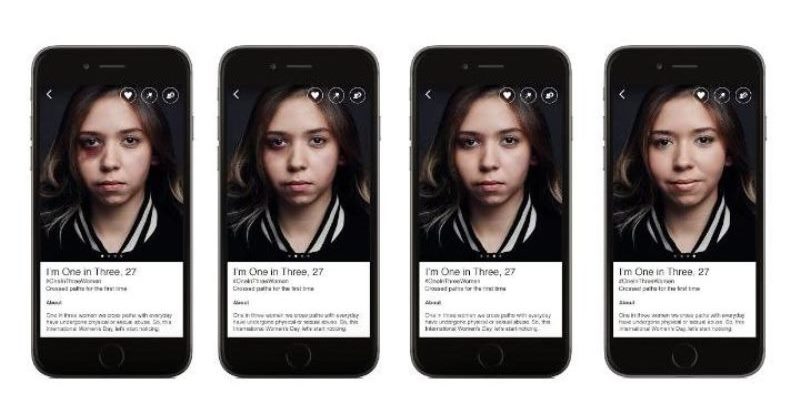 “We hope that showing how enormous this problem is will inspire everyone to call on their governments to end all forms of violence against women. Countless commitments have been made, but they do not always translate to action.”

When a regular male user of the dating app Happn encounters one of these survivor profiles, the profile image shows a battered woman, and as the user scrolls through the photos, they show her slowly heal.

“Our primary purpose is to restore the missed connections in life. Making the connection between overlooked survivors of violence against woman and all the rest of us who otherwise pass them by every day is one of the greates services Happn can make (sic).”

These special profiles containing the username “I’m One in Three,” will be available in 21 cities, including Paris, Hong Kong, and New York. 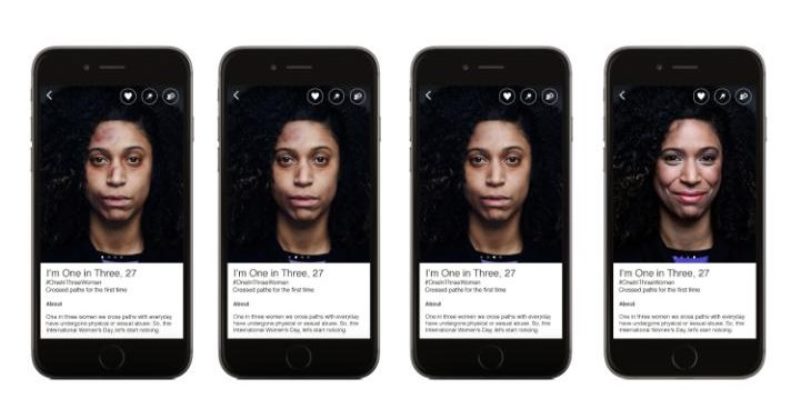 Happn and Equality Now hope that this project will raise awareness about the prevalence of violence against women and nudge governments all over to take proactive action.

Speaking about the same, Hassan said,

“This International Women’s Day is yet another great opportunity for all governments to take a concrete step in this direction by reviewing their legislation and removing all laws that help perpetuate violence, or which discriminate, against women.”

The way in which Happn has gone about creating awareness might be shocking or even crude, but it sure has hit the nail on the head. And when we live in a world where it is still so unsafe and uphill a battle to be born female, this approach gets our approval.