Bumble Stands Up For Woman Who Was Harassed On The App

With the advent of dating apps, the old school dating rules took a backseat, and harassment took the front, unfortunately. And this harassment is predominantly towards women.

But the feminist dating app, Bumble, isn’t one to take such harassment on its app lightly. Bumble was created by Whitney Wolfe, a former co-founder of Tinder, and gives women the chance to make the first move.

The harassment in question happened when a male user, Connor, sent abusive messages to another user, Ashley. The exchanges were brought to the attention of Bumble after Millionaire Matchmaker cast member David Cruz III tweeted and blogged about the incident along with the screenshots.

Ashley was chatting with Connor, who works in finance. When Ashley asked him about his job, he blew a gasket and threw an epic temper tantrum, going so far as to call her a whore! Now, you could ask what’s wrong with a legitimate question regarding one’s job, especially on a dating app where you’re trying to get to know a person. After all, a person’s job is where they spend more than half their lifetime.

See the sexist rampage that Connor went on at this innocuous question from Ashley: 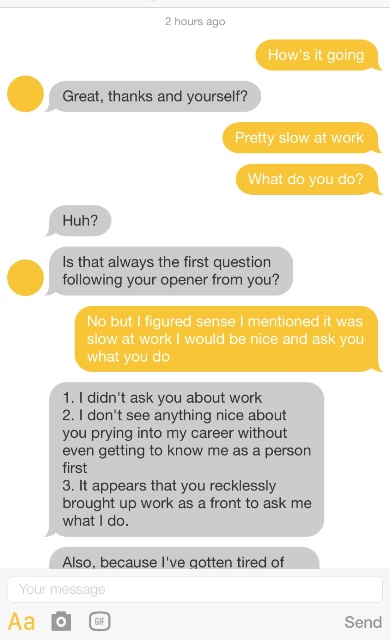 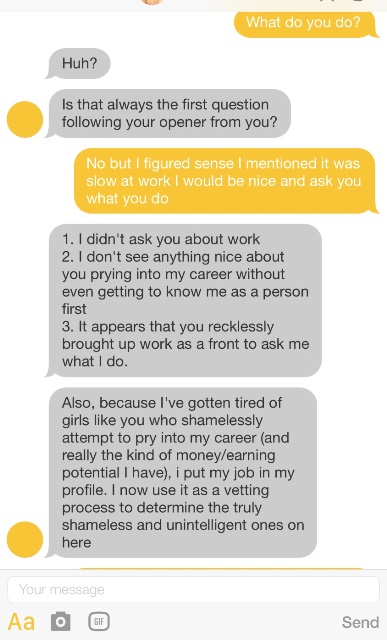 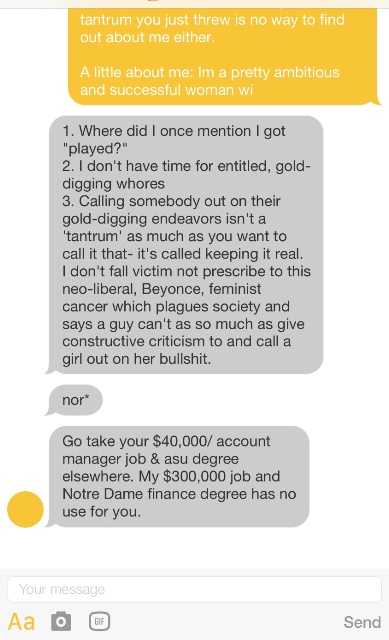 Connor didn’t just accuse Ashley of being a gold digger, but also tried to demean her education and her work, along with her salary by comparing hers to his. Something is seriously wrong with this dude, eh?

Suggested read: 12 misconceptions about online dating that are far from true

And this time, this harassment didn’t go unnoticed or unpunished. Bumble took a stand, and wrote Connor an open letter on their blog, explaining why his behavior was totally unwarranted and misogynistic, not to mention sexist. They wrote:

“We can gather that she [Ashley] wasn’t hoping to figure out if your wallet was sizeable enough for her to move into your house and start cooking dinner for you after vacuuming your living room while you clock in 9 to 5 work day. Instead, Ashley was (wait for it, Connor, because this is where things really get interesting), viewing herself as an equal… While you may view this as ‘neo-liberal, Beyonce, feminist-cancer,’ and rant about the personal wounds you are trying to heal from classic ‘entitled gold digging whores,’ we are going to keep working. We are going to expand our reach and make sure that women everywhere receive the message that they are just as empowered in their personal lives as they are in the workplace. We are going to continue to build a world that makes small-minded, misogynist boys like you feel outdated.”

And the finale, that is totally worth it:

“Connor, consider yourself blocked from Bumble.”

Signing the open letter with hashtags #ImWithAshley and #LaterConnor, Bumble has shown where it stands. The letter has since gained a lot of support on social media too.

Connor has been effectively banned from Bumble dating app for violating its terms of service, which states that it prohibits “language which could be deemed offensive or is likely to harass, upset, embarrass, alarm or annoy any other person.”

So are men really oversensitive? Or is this a case of once bitten, twice shy? Whatever the case maybe, Connor didn’t have any right to shame Ashley or treat her disparagingly for asking a simple enough question. Grow up, dude!

Article Name
Bumble Stands Up For Woman Who Was Harassed On The App
Author
Chaitra Ramalingegowda
Description
Bumble dating app stands up for a woman who was harassed by a male user on the app, and it's reply to him is simply PERFECT!