Why I Love “Me Before You” Despite The Ending

Louisa, an ordinary woman living an ordinary life, someone who has never left the tiny village she calls home, gets a job where she needs work for Will Traynor, an ex Master of The Universe champion who is now wheel-chair bound after an accident. As someone who has already lived his best life, Will does not want to continue living. Will is always angry, frustrated at life and at everyone who tries to help him for he sees it as sympathy.  Will Louisa show Will that life is after all worth living? Or does Will teach her that sometimes making the person you love happy, means breaking your own heart? You will have to read the book to find out.

In today’s post, we will read some of the best quotes from Me Before You by Jojo Moyes.

Quotes from Me Before You

“You only get one life. It’s actually your duty to live it as fully as possible.”

“Some mistakes… Just have greater consequences than others. But you don’t have to let the result of one mistake be the thing that defines you. You, Clark, have the choice not to let that happen.”

“I will never, ever regret the things I’ve done. Because most days, all you have are places in your memory that you can go to.”

“All I can say is that you make me… you make me into someone I couldn’t even imagine. You make me happy, even when you’re awful. I would rather be with you – even the you that you seem to think is diminished – than with anyone else in the world.”

“Hey Clark’, he said. ‘Tell me something good’. I stared out of the window at the bright-blue Swiss sky and I told him a story of two people. Two people who shouldn’t have met, and who didn’t like each other much when they did, but who found they were the only two people in the world who could possibly have understood each other. And I told him of the adventures they had, the places they had gone, and the things I had seen that I had never expected to. I conjured for him electric skies and iridescent seas and evenings full of laughter and silly jokes. I drew a world for him, a world far from a Swiss industrial estate, a world in which he was still somehow the person he had wanted to be. I drew the world he had created for me, full of wonder and possibility.”

“You can only actually help someone who wants to be helped.”

“Wear those stripy legs with pride. And if you insist on settling down with some ridiculous bloke, make sure some of this is squirreled away somewhere. Knowing you still have possibilities is a luxury. Knowing I might have given them to you has alleviated something for me.”

“I hadn’t realized that music could unlock things in you, could transport you to somewhere even the composer hadn’t predicted. It left an imprint in the air around you, as if you carried its remnants with you when you went.”

“I turned in my seat. Will’s face was in shadow and I couldn’t quite make it out.
‘Just hold on. Just for a minute.’
‘Are you all right?’ I found my gaze dropping towards his chair, afraid some part of him was pinched, or trapped, that I had got something wrong.
‘I’m fine. I just . . . ’
I could see his pale collar, his dark suit jacket a contrast against it.
‘I don’t want to go in just yet. I just want to sit and not have to think about . . . ’ He swallowed.
Even in the half-dark it seemed effortful.
‘I just . . . want to be a man who has been to a concert with a girl in a red dress. Just for a few minutes more.’
I released the door handle.
‘Sure.’
I closed my eyes and lay my head against the headrest, and we sat there together for a while longer, two people lost in remembered music, half hidden in the shadow of a castle on a moonlit hill.”

“You are scored on my heart, Clark. You were from the first day you walked in, with your ridiculous clothes and your complete inability to ever hide a single thing you felt.”

“…I told him a story of two people. Two people who shouldn’t have met, and who didn’t like each other much when they did, but who found they were the only two people in the world who could possibly have understood each other.”

“Shhh. Just listen. You, of all people. Listen to what I’m saying. This…tonight…is the most wonderful thing you could have done for me. What you have told me, what you have done in bringing me here…knowing that, somehow, from that complete arse, I was at the start of this, you managed to salvage something to love is astonishing to me. But…I need it to end here. No more chair. No more pneumonia. No more burning limbs. No more pain and tiredness and waking up every morning already wishing it was over. When we get back, I am still going to go to Switzerland. And if you do love me, Clark, as you say you do, the thing that would make me happier than anything is if you would come with me. So I’m asking you – if you feel the things you say you feel – then do it. Be with me. Give me the end I’m hoping for.”

Suggested read: 20 Of The Saddest Quotes On Love That Will Make Your Eyes Wet

“I placed my face so close to his that his features became indistinct, and I began to lose myself in them. I stroked his hair, his skin, his brow, with my fingertips, tears sliding unchecked down my cheeks, my nose against his, and all the time he watched me silently, studying me intently as if he were storing each molecule of me away. He was already retreating withdrawing to somewhere I couldn’t reach him.
I kissed him, trying to bring him back. I kissed him and let my lips rest against his so that our breath mingled and the tears from my eyes became salt on his skin, and I told myself that, somewhere, tiny particles of him would become tiny particles of me, ingested, swallowed, alive perpetual. I wanted to press every bit of me against him. I wanted to will something into him. I wanted to give him every bit of life I felt and force him to life.
I held him, Will Traynor ex-City whiz kid, ex-stunt diver, sportsman, traveler, lover. I held him close and said nothing, all the while telling him silently that he was loved. Oh, but he was loved.”

“Do you know how hard it is to say nothing? When every atom of you strains to do the opposite? I had practiced not saying anything the whole way from the airport, and it was still nearly killing me.”

“Time slowed, and stilled. It was just the two of us, me murmuring in the empty, sunlit room. Will didn’t say much. He didn’t answer back, or add a dry comment, or scoff. He nodded occasionally, his head pressed against mine, and murmured, or let out a small sound that could have been satisfaction at another good memory.
“It has been, the best six months of my entire life.”
“Funnily enough, Clark, mine too.”
And then, just like that, my heart broke. My face crumpled, my composure went and I held him tightly and I stopped caring that he could feel the shudder of my sobbing body because grief swamped me. It overwhelmed me and tore at my heart and my stomach and my head and it pulled me under, and I couldn’t bear it.”

“I told him I loved him,” she said, her voice dropping to a whisper. “And he just said it wasn’t enough.” Her eyes were wide and bleak. “How am I supposed to live with that?”

“I know this isn’t a conventional love story. I know there are all sorts of reasons I shouldn’t even be saying what I am. But I love you. I do. I knew it when I left Patrick. And I think you might even love me a little bit.”

“… if you’re going to wear a dress like that you need to wear it with confidence. You need to fill it out mentally as well as physically.”

“You cut yourself off from all sorts of experiences because you tell yourself you are ‘not that sort of person’”
“But, I’m not.”
“How do you know? You’ve done nothing, been nowhere. How do you have the faintest idea what kind of person you are?”

Suggested read: 9 Swoon-Worthy Book Boyfriends You Can Spend Your Valentine’s Day With

This is all we have on today’s post on the best quotes from Me Before You. This is, however, not an exhaustive list, and if we have missed out on some of your favorites, then please feel free to add them in the comment section below. 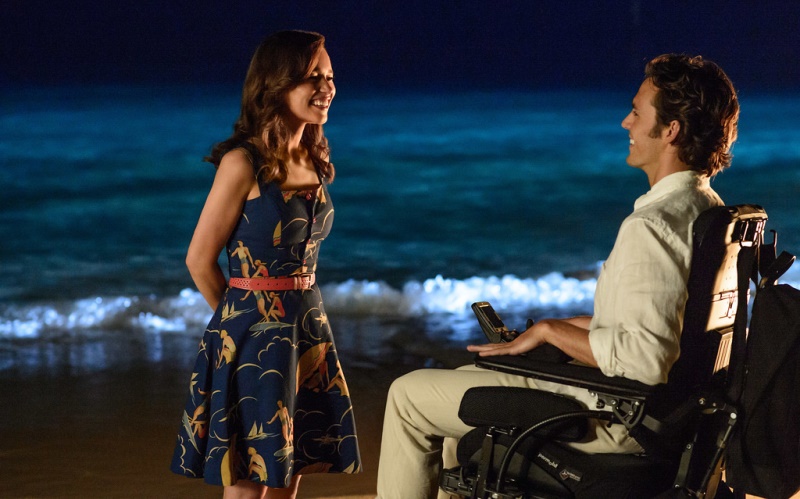 Article Name
Here Are 21 Of The Most Memorable Quotes From Me Before You
Author
Ruth Russell
Description
In today's post, we will read some of the best quotes from Me Before You by Jojo Moyes.