“Big Magic” by Elizabeth Gilbert: A Survival Guide For The Artist

“Let me begin by telling you the most magical thing that’s ever happened to me. It’s about a book that I failed to write.”

“Big Magic” (2015) by Elizabeth Gilbert is a handbook that every artist should revisit every often. It spoke to me softly, personally, and as though it has known my deepest, most intimate thoughts. “Big Magic” is interspersed with personal details of incidents that have transpired in Gilbert’s life and those of her acquaintances. It traces the origin or the applications of her theories, and reaffirms the title of her book.

In this post, I will attempt to discuss snippets of her book. The fragments will hardly cover the smallest percentage of the goldmine that her book embodies.

Suggested read: Creativity Does Not Have To Be A Suffering Contest

In the chapter, “Scary, Scary, Scary”, Gilbert enlists common fears which artists face. “You’re afraid somebody else already did it better.” “You’re afraid your dreams are embarrassing.” It feels like Gilbert is peering into your very own subconscious, pulling the demons up by their collars, and saying, “Hey, are you comfortable?” The insight also explains that you are not the only one with discouraging voices in your head. The greatest art has always needed the highest form of courage. For every appreciative comment, there will be a bag full of sneers, but our art should come to depend on neither.

When faced with hardship, we tend to resist the voices that say, “It will be alright”, “It will all fall into place”, “You are stronger than this”. So many times, I have caught myself mentally screaming at well-wishers saying, “You do not know what this pain feels like. You do not know if this will be okay. I don’t feel strong enough, and you should stop calling me a warrior.” As it turns out, we tend to defend our weaknesses, because it makes us feel comfortable; it gives us the easy way out of having to dust our sorrows off and face our fears.

This idea in “Big Magic” has helped change my view about creating art. When an idea dawns on me, I now treat it as a human being. I do not seen-zone their texts and then expect them to wait for me to come around. I do not mistreat them, or engage with them half-heartedly. When I am encumbered with work and simply do not have the time to entertain them, I sadly let them go, without making them wait, or putting them away with a month’s notice.

When inspiration strikes, act on it. Write that piece, paint that picture, compose that song. When the idea gets tired of waiting, it will move on with its potential, to somebody who is willing to give it their immediate attention. Gilbert illustrates this phenomenon with a surprising real-life incident, in the book.

There is enough space for artists to coexist without being at each other’s throats. We often find situations where we accuse somebody else of “stealing” our thoughts, when in fact, we forget that a line of thinking can be attributed to more than one person in a pool of seven billion heads. When Gilbert published, ‘Eat, Pray, Love’, a lot of people angrily accused her of stealing their manuscripts, their stories, their journey. She could never have known the stranger’s story, but that logic did not stop the resentment from running its toxic course. As artists, collaborators, and creative beings, we need to learn to respect the artistic labour of our fellow creators.

Gilbert asks you to look at your potential as something the Greek and Romans called a daemon. It is an external being essentially linked to your existence. Your genius, your potential, your ability to create, will not always be in its best form. On some days it will be sick, on some others it might be on a vacation. Intermediate bumps will never mean that you have lost your creative potential or that you have suddenly unlearned your skillset. We tend to beat ourselves up over phenomenon that are way beyond our control.

Your art does not have to compliment or surpass highbrow standards in order for it to be legitimised. Each one of us here are trying to make the best we can out of what we have. It will be great for some, and will miss the mark for some others. But neither of that is what brings credibility to what we create. Our art is a legitimate being from the very moment we conceive it. Do not allow the false standards of others dictate your worth or ability. As Gilbert says, “You do not need a permission slip from the principal’s office to live a creative life.”

Suggested read: Can We Separate The Art From The Artist?

Doesn’t that take a lot off of your shoulders? Is this the first time you realize that you have been carrying the weight of the world’s Rennaissance on your crumbling spine? Artists often give up on projects because they think that it won’t make a difference. Honestly, it does not have to. Your art has the right to exist even if it does not change somebody else’s life. You would not bring a child into this world and say, “Hey, you only have the right to live if you can become a messiah and lead the people on the Right Path.” That is too much pressure on a human being, and that is unjustifiable pressure on your art.

Assuming the role of a creator in the capacity of the only career is terrifying, to say the least. If you let your daily expense depend on your avenue of joy, then it gradually starts resembling a point of massive stress. We create because it brings us happiness. The moment that purpose shifts from solely joy to paying bills, we will find ourselves holding our creation by the collar and screaming, “Why are you not making me money? I am in so much debt because of you, and I am beginning to feel like you are not worth the trouble.” Placing too much responsibility on the Craps dice has never really been fruitful.

Gilbert’s take on rejection came to me at a time when I ardently needed it. You won’t always get accepted into the places you have dreamed of; you won’t always get to keep the things you worked to achieve. But your only purpose is to keep thundering forward. Maybe the time wasn’t right for the piece you created; maybe the printing cycle was largely focusing on something very different; or, maybe your art did not suit the particular house you sent it to. Eight out of ten times, rejections do not reflect on you or your work. Perseverance, especially when the world seems to be falling apart, is the only ticket out of devastation.

So, just go forward and create. Write absolute garbage, paint pictures you cannot recognize, compose a mediocre song. But don’t give up on an idea because you do not have the time to polish it exactly twenty-seven hundred times. This is not Rapunzel’s hair. This is your own creative expression, and it deserves to breathe.

Suggested read: Life Happens At 25: And This Artist Captures The Oh-s And The Woes Just Right!

“Big Magic” by Elizabeth Gilbert is almost the Bible for creative life. I say almost, because I know that she would disagree with such a proclamation. This book has pointed at all the things I have stuffed into the dirty closet of ‘denial’, and helped me significantly battle my fear of mediocrity. Ever since I picked up the book, I have been a healthier artist, without the baggage of the world’s salvation resting on my shoulders.

“…the clock is ticking, and the world is spinning, and we simply do not have time anymore to think so small.” 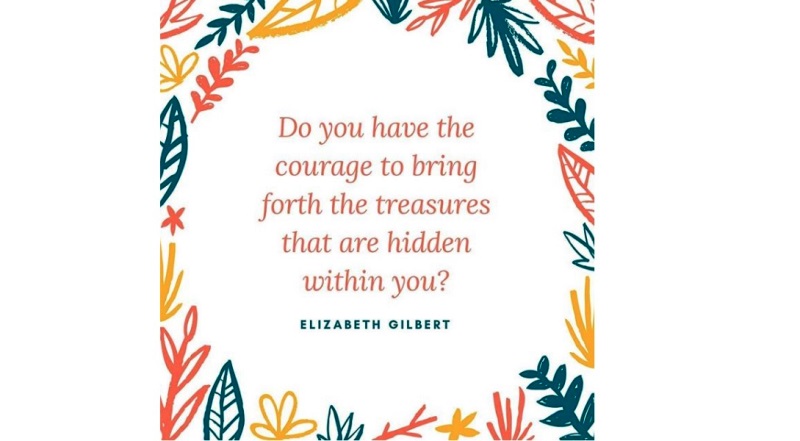 Author
Meghalee Mitra
Description
“Big Magic” by Elizabeth Gilbert is almost the Bible for creative life. Ever since I picked up the book, I have been a healthier artist.