Why Is Thanksgiving Celebrated: Past And Present

We have a million reasons to be thankful for and hundreds of people to thank, but because of the everyday hustle-bustle, we rarely get an opportunity to actually show our gratitude. Thanks to Thanksgiving Day, we have an annual occasion to outwardly express our appreciation. Therefore, I believe my first ‘Thank you’ this season will be to the festival itself. And to do so, I thought I should read up on the history of Thanksgiving and share it with everyone.

Thanksgiving as a festival is celebrated in many parts of the world, even in several parts where it was previously unheard of. As a national holiday in Canada and the U.S., Thanksgiving has its original roots in religion and culture, even if celebrated secularly. Let’s delve in them a little deeper.

The root of the root: Why is Thanksgiving celebrated? 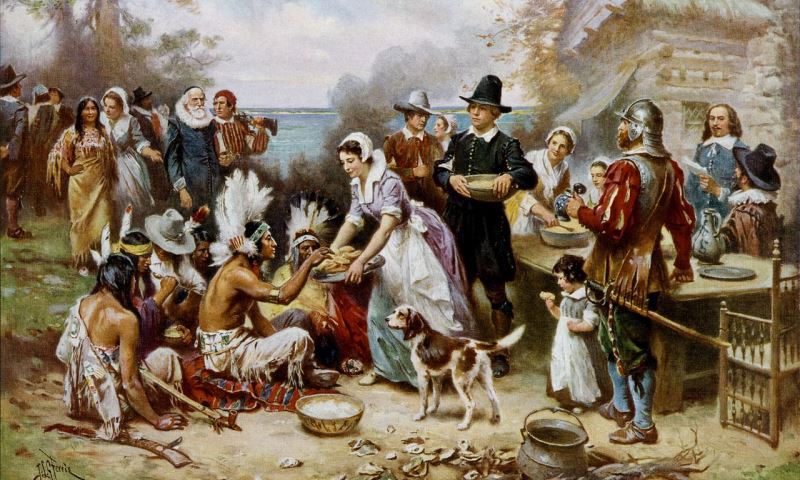 Prayers to offer thanks and special ceremonies once the season’s harvest is gathered are celebrated by many major religions around the world. The history of Thanksgiving in the North American continent has its roots in English traditions going as far back as the Protestant Reformation. It is also associated with a harvest festival, though in New England, the reaping is done well before the last week of November when the modern Thanksgiving Holiday is observed.

It was in the reign of Henry the VIII that Thanksgiving became significant as a reaction by the Protestants to the numerous holidays celebrated by the Catholic Church. Before the year 1536, there were as many as 95 Catholic holidays in addition to the 52 Sundays for mass. On each of these days, people needed to go to Church, giving up work and also paying for these expensive celebrations.

The Protestant reforms cut these holidays down to 27, even though a few Puritans wanted to completely get rid of all church holidays like Christmas and Easter! As a result, these old holidays were supposed to be replaced by days of thanksgiving or fasting. A unique annual Thanksgiving Day started off in 1606 after the failure of Gunpowder Plot and went on to be called Guy Fawkes Day. 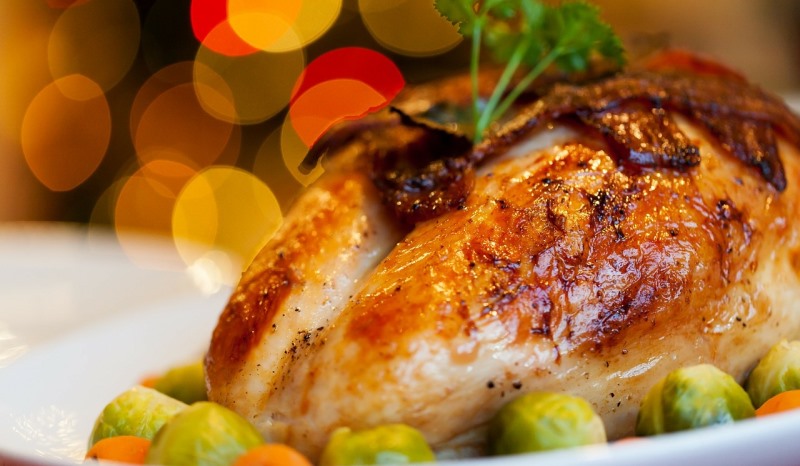 Canada: Thanksgiving is an annual Canadian holiday taking place on the second Monday of every October. Although the celebration is linked to God and observed in churches, it is done in a secular fashion. Though the history of Thanksgiving is traced back to 1578, new settlers from England like the Irish, the Scottish, and the Germans improved the celebrations by adding their own elements. When the United Empire Loyalists fled the U.S. and settled in Canada, they introduced the turkey— thank God for that!

Grenada: Thanksgiving is celebrated as a national holiday on the 25th of October in the West Indian island of Grenada. Though it is named the same and honored around the same time, it is unrelated to the Canadian or American version. It commemorates the Island’s invasion by the U.S. in 1983.

Liberia: The anniversary marking the colonization of the freed black slaves from the U.S. in 1820 is celebrated as Thanksgiving Day in Liberia on every first Thursday of November.

The Netherlands: To remember the hospitality provided to the pilgrims who traveled to the Plymouth Plantation, Thanksgiving is celebrated in Holland on the same day as the U.S.

The United States of America: Today, Thanksgiving is celebrated on the third Thursday of November in the U.S. Celebrated just before the beginning of December, this kickstarts “the Holiday Season” for many Americans.

The United Kingdom: There is no specific day to celebrate Thanksgiving in England. It depends on the ‘harvest moon.’ The history of Thanksgiving in the U.K. saw people offer gratitude for the new harvest by singing, dancing, and decorating a basket of fruits and other foods. Today, the festival is Americanized, with the sale of Turkey ‘soaring high’ on this day.

Germany: In Germany, it is called Erntedankfest and is celebrated in early October. Oktoberfest, the world’s largest beer festival, also takes place around the same time!

Japan: Thanksgiving in Japan extends appreciation and acknowledgement to the labor put in by everyone. It attaches importance to hard work.

It’s cool to know that there are so many things to be thankful about and that each country celebrates the same festival for different reasons. That’s how deep Thanksgiving is!

The turkey: “The turkey is a much more respectable bird and withal a true original Native of North America,” remarked Benjamin Franklin once, because he thought the turkey should be America’s national bird. “Pardon the turkey?” Well, most households think otherwise. A Thanksgiving dinner is imperfect if there is no turkey on the table. It adorns the feast like a boss. This serves as a memory of the ‘Four Wild Turkeys’ that were roasted for the first Thanksgiving spread. Turkey carving is also a popular competition on Thanksgiving.

The horn of plenty: Cornucopia is a horn-shaped basket crammed with fruits of the harvest. According to Thanksgiving history, it was a goat’s curved horn which used to be filled with grains and fruits. A Greek legend holds that a goat called Amalthea once broke her horn and presented it to Zeus to show reverence. Zeus set her image in the sky as a sign of thankfulness, which today we see as constellation Capricorn.

The corn: Some Americans regard the blue and white corn as sacred. Nowadays even popcorn finds a place on the Thanksgiving table! However, the corn traditionally was important because it is what the natives taught the pilgrims to grow in order to survive the bitter winter season. Corn is a symbol of the significance of the popular harvest festival. It is also the base of modern agriculture in the U.S.

The pumpkin pie: It is customary because pumpkins have been America’s sweethearts for over 400 years now!

The beans: Popularly dubbed as one of the ‘3 Sisters,’ beans were among the food items natives taught the pilgrims to cultivate. They are also called ’pole beans’ since cornstalks were used as poles for the beans to grow.

The cranberries: Initially called ‘crane berries’ since the pink blossoms and droopy head reminded the pilgrims of the tall birds, cranberries are a symbol of the modern diet. The bitter cranberries used to be sweetened with maple sugar by the pilgrims. Since then, any Thanksgiving feast finds cranberry sauce on the menu! 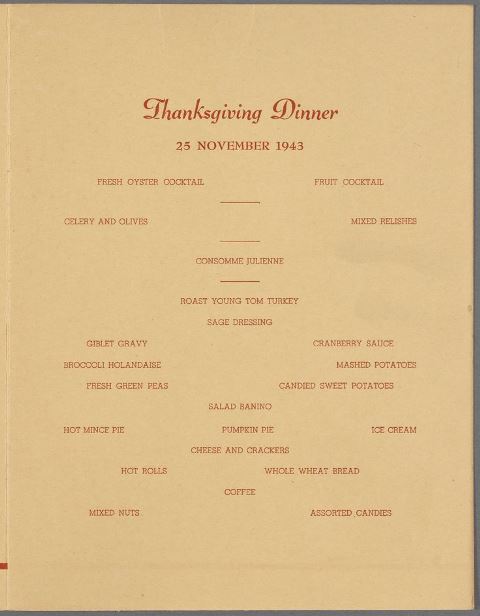 Thanksgiving Day is also colloquially called Turkey Day, and you know why! Most turkey roasts on Thanksgiving have a bread-based stuffing. Sage, a traditional herb, is also added to the dressing, with chopped celery, cubes of carrots and onions. Chopped chestnuts, crumbled sausage or bacon, cranberries and apples may also be added. Deep-fried turkey is becoming popular because of its relatively shorter cooking time. Goose, duck, or quail may also be the centerpiece in Thanksgiving dinner as an alternative to the turkey.

The side dishes include winter squash, sweet potato, corn on the cob, dumplings, noodles, deviled eggs, bread rolls, turnips, etc., No wonder the feast starts off at noon so that guests get enough time to eat all that’s on the table!

The beverages served on Thanksgiving are as varied as the side dishes. Spirits and cocktails are often served before the meal and also after. Apple cider, wine, and pitchers of sweet tea are gulped down by the invitees merrily. Beaujolais nouveau may also be served. 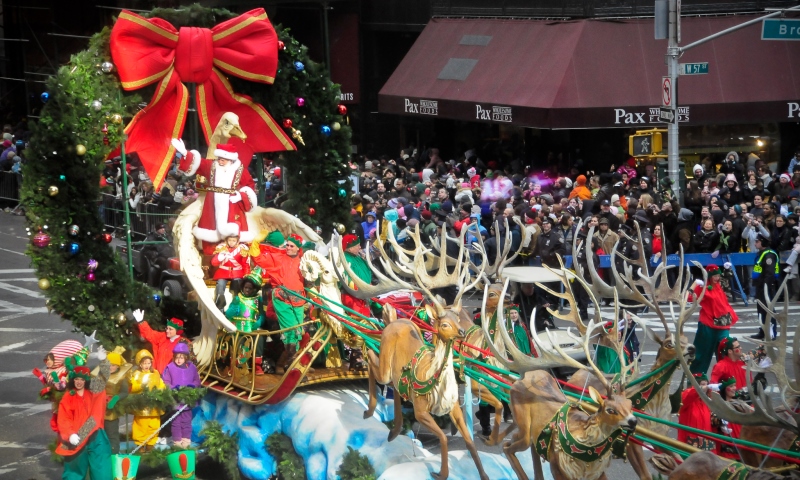 The US-based department store Macy’s organizes an annual parade every year on Thanksgiving Day. It’s a three-hour event and something you must be a part of if you are in New York. Every single year, artists from a number of Broadway shows perform either during the parade itself or after, in front of the Macy’s store. In 2014, A Gentleman’s Guide to Love and Murder, Honeymoon in Vegas, The Last Ship, On the Town, and Side Show were performed.

The tradition started in the 1920s when most of the store’s staff were first generation immigrants. Proud of their newfound American heritage, they wanted to cherish Thanksgiving with the festival spirit they had experienced in Europe. The balloons that we see in the parade come in a total of three makes. First, the novelty balloon class, which consist of many small balloons; the second, the full-size balloons, which represent licensed pop culture characters, like Mickey Mouse, Spiderman, Donald Duck etc.; and the third, “Blue Sky Gallery,” which transforms works of present-day artists into balloons. In case you didn’t know, Macy’s Day Parade is also a song by the band Green Day!

So what are you up to this Thanksgiving next week? How will you be expressing gratitude? What will you be cooking for the feast? Do tell us in your comments below and also keep an eye on this section for from decoration ideas and recommended recipes.

Lastly, I would like to take this opportunity on behalf of the NLT team to express my heartfelt thankfulness to all our readers. Thank you for your continued support!

Article Name
History Of Thanksgiving: Why Is It Celebrated?
Author
Ruth Russell
Description
Thanksgiving is celebrated in different countries for different reasons. Here's a quick history of Thanksgiving and also the why behind the festival.