Meaning and importance of Telugu wedding rituals and traditions

“My heart to you is given;

Oh, do give yours to me;

We’ll lock them up together,

And throw away the key.”

At a glance, the intricate rituals of an Indian wedding may appear like a lot of chaos and unnecessary fuss to the unfamiliar eye, but on delving deeper, it becomes obvious that these rituals are symbols of the holy vows of matrimony, which include not just the bride and groom, but their families as well! And one fine example of such a wedding is the Telugu Hindu wedding. Weddings of Andhra Pradesh share many things with those of its southern neighbors, but have their own unique rites as well. The rich culture of the state is reflected in its various traditions, especially the presence of rice in several rituals. While ancient weddings used to go on for as many as 16 days, today’s busy world has shortened it for just a few days. But that doesn’t mean that the rituals are compromised on! Here is a look at the various Telugu wedding rituals that make up an authentic Andhra wedding. 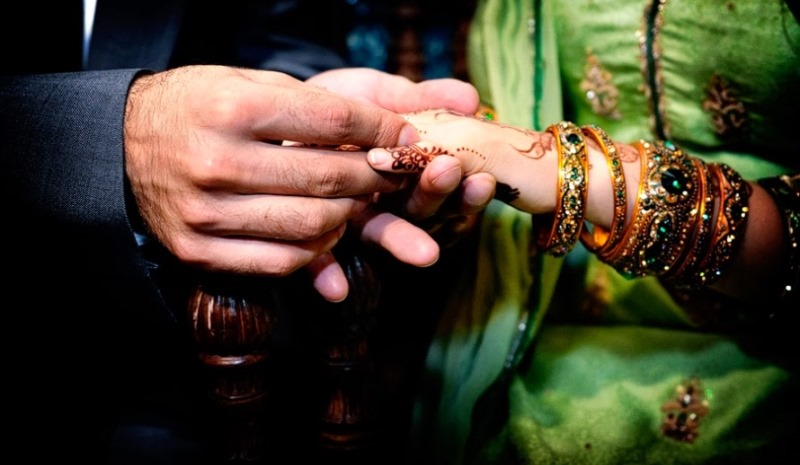 This is the engagement, where the wedding is officially ‘fixed.’ But it’s not just as simple as an exchange of rings. It is quite a grand event, where both families get together and decide upon the wedding date and time (muhurtham) based on horoscopes and planetary positions. Gifts are exchanged and the bride in particular is lavished with clothes, jewelry, and silverware. 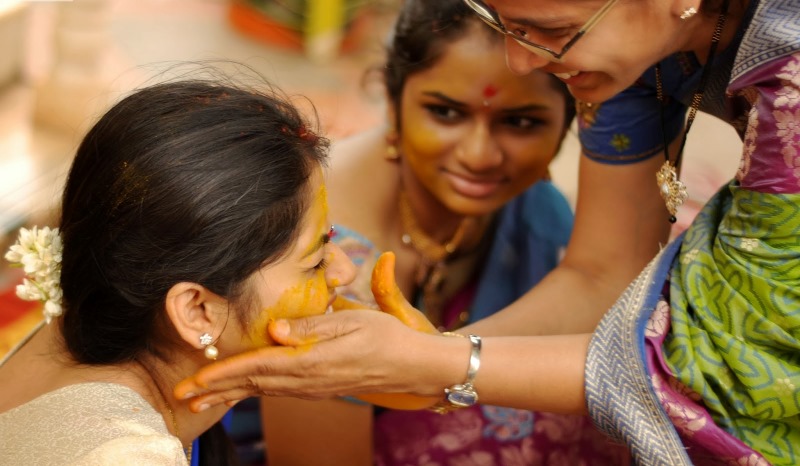 This ritual is the start of the actual wedding prep, where the bride and groom get ready to look their best on their special day. The Pellikuthuru is held separately at the bride’s and groom’s homes, where close family members smear them with oil and turmeric. The intention is to make the skin glow, so that the bride and groom literally outshine the others on their wedding day! This is followed by a bath, after which they are presented with brand new clothes along with jewelry and flowers for the bride.

This is a ritualistic bath for the groom that has its roots in ancient times. Early Brahmins had an organized system where boys were first given their sacred threads, and then sent away to learn scriptures from sages or wise men. On their return, they were made to perform the Snatakam, which meant that their education was complete and they were now ready for greater responsibilities like starting a family. Today, this ritual signifies the readiness of the groom for marriage and is concluded by the wearing of a silver thread. 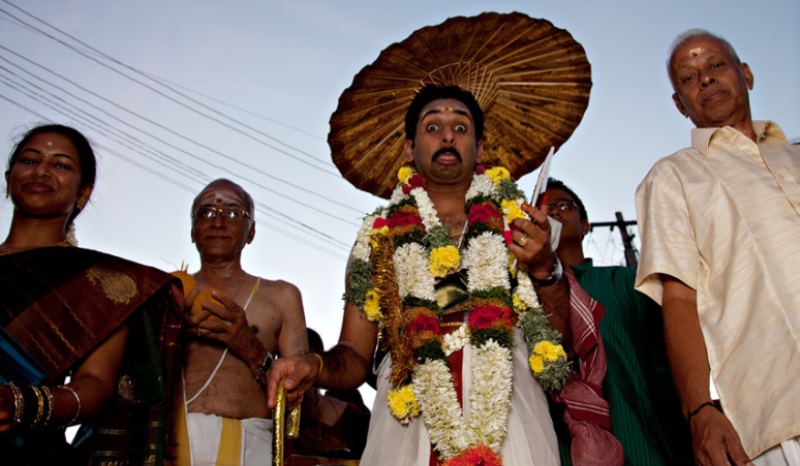 As mentioned earlier in the Snatakam, the groom is now ready for more responsibilities where he has the option of choosing between getting married or going to places like Kashi (in Uttar Pradesh) for further learning. The Kashi yatra ceremony is a playful take on this where the groom pretends to leave for Kashi, renouncing worldly pleasures like marriage. The bride’s brother requests him to stay back and marry his sister, offering him gifts in the process. After a bit of good-natured teasing, the groom relents and agrees to marry the insistent young man’s sister! 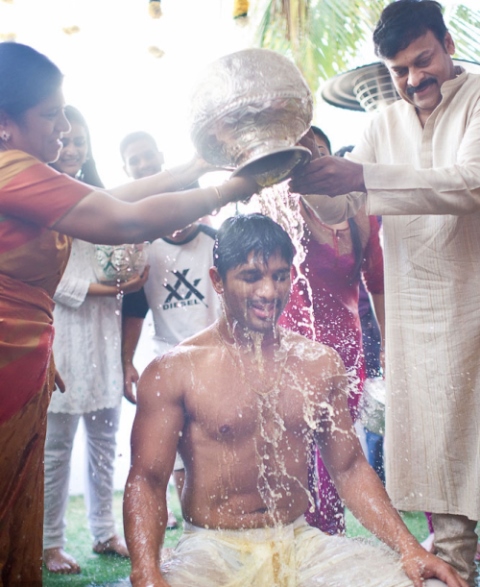 It’s D-day, and it begins with a Mangala Snaanam at the bride’s and groom’s houses separately, and is literally translates as ‘auspicious bath.’ This bath is essential before any of the other rituals can be performed. The bath is followed by family members anointing the bride and groom with oil and performing an aarti to keep them safe from evil eyes, and to seek God’s blessings through all the wedding proceedings. 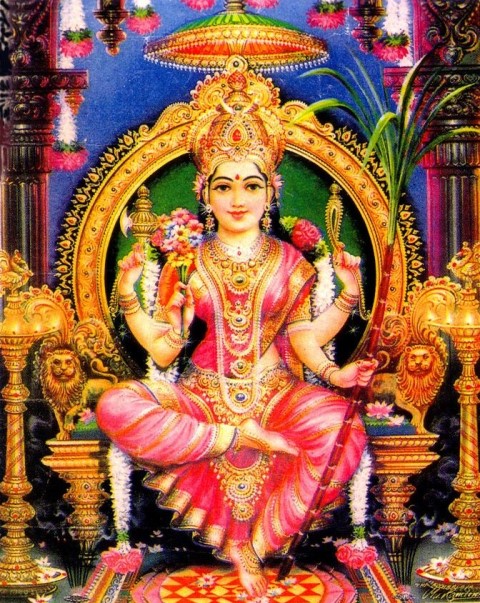 This is a pooja performed by the bride to the Goddess Gauri. One reason for this is because she represents fertility, and the other is because her bond with her husband Lord Shiva is considered an ideal that married couples should strive for. The bride prays for similar blessings in her future life with her new husband. 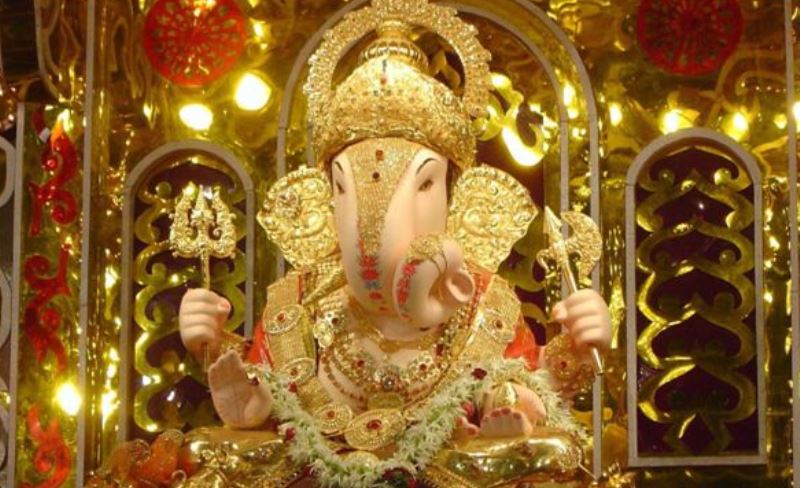 While the Gauri Pooja is in progress, the groom performs a Ganesh Pooja at the wedding venue, on the mandapam or platform. Most auspicious occasions begin with a Ganesh pooja, since Lord Ganesh is believed to dispel darkness and remove obstacles in one’s path. The groom prays for a bright future and a successful, hassle-free marriage with his new wife. 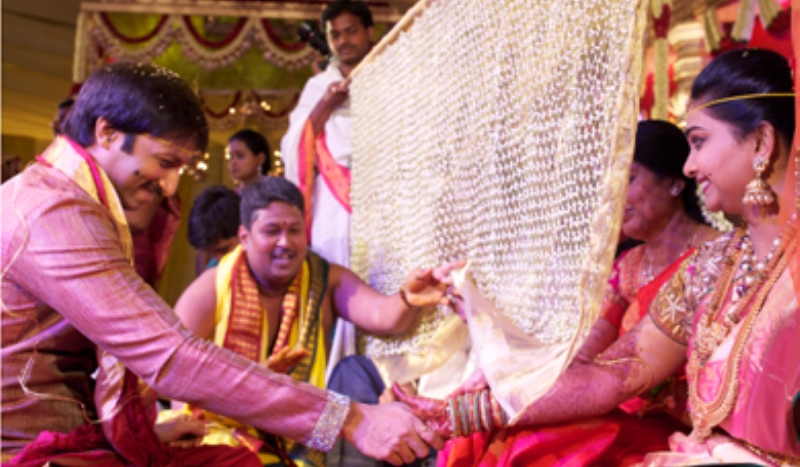 The actual wedding ceremony begins here. The bride is seated in a basket lined with rice. Rice being the staple diet of the state is considered a sign of prosperity and often features in auspicious occasions like weddings. Her maternal uncles carry her to the mandapam in the basket. However, she is not allowed to look at the groom and vice versa, so a curtain or terasalla is placed between the two of them, that stays on till the ceremony is over. 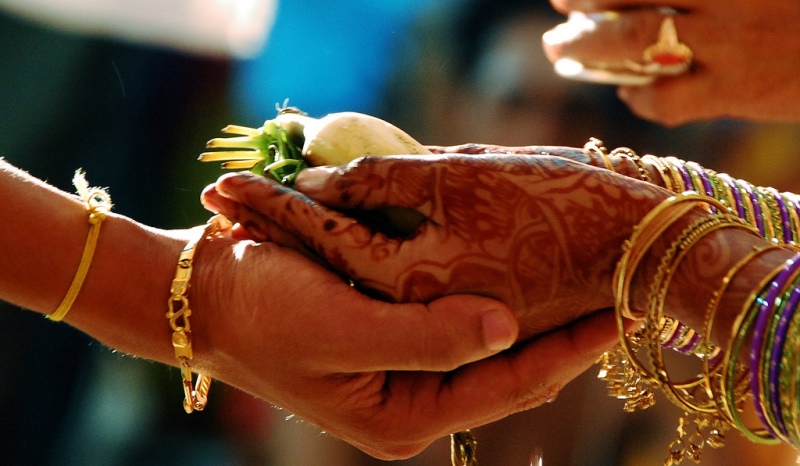 Kanyadaan literally means, ‘offering the bride,’ and this is the point where the bride’s family officially gives her hand to the groom. At this point, the groom is considered to be an incarnation of Lord Vishnu, so the bride’s parents wash his feet and offer their daughter to be his partner in life, through thick and thin. The groom responds by promising to fulfill all his duties towards his wife and protect her always. Sometimes, a sweet dish and gifts are presented to the groom by his in-laws; a substitute for offering a cow as was the practice in olden days. 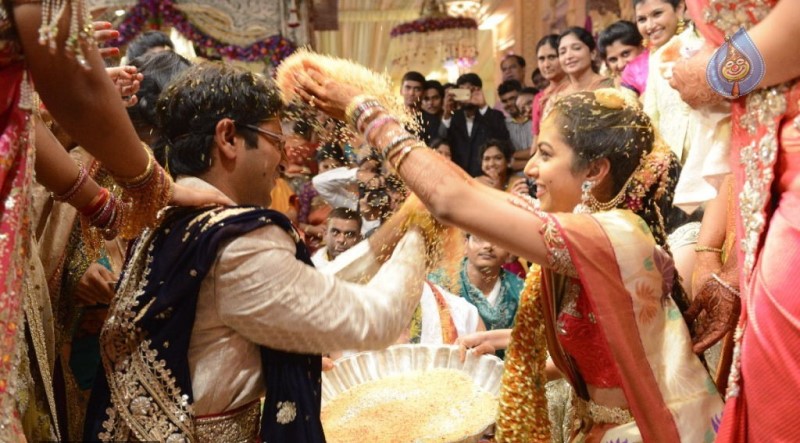 This is the main event of the wedding. Jeelakarra refers to cumin and Bellamu refers to jaggery; this ritual involves placing a paste of cumin and jaggery on the hands of the couple. They then place this paste on each other’s heads, moving their hands above the curtain. The mixture of flavors indicates that the bride and groom will stick together through both the bitter and sweet phases of life. This is the point at which the couple is now officially man and wife and the curtain separating them is now removed.

The priests chant and pray for a prosperous and successful marriage, and ask the Gods to remove any deficiencies in the couple. The bride and groom now leave the mandapam to change into white cotton clothes with red borders. The white is indicative of purity, while the red represents strength – signifying traits like loyalty and strength that are essential to any marriage. After changing into their new clothes, the bride and groom return to the mandapam for the next set of rituals.

This ritual sees a group of married women or sumangalis proceeding towards the mandapam, carrying trays of lamps made with rice flour, sugar, and milk along with two trays of rice. The lamps are lit, and meant to embody sweetness along with light in the marriage with the rice representing prosperity in the new couple’s life. The Mangalsutram is placed on top of the rice. 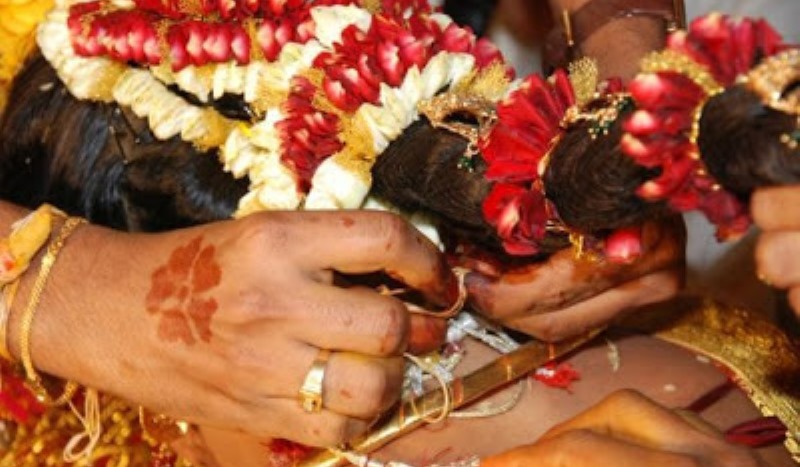 The mangalsutram or thaali, a necklace tied by the groom around the bride’s neck, is the main identifying mark of a married woman in nearly all states of India, and it is just as important in Telugu weddings. However, the mangalsutram here is unique in that it consists of two separate pendants tied together. The groom ties this around the bride’s neck in three knots, signifying complete union – physical, mental, and spiritual. The three knots also refer to the groom’s promise to care for his wife and not hurt her either through thoughts (manasa), speech (vacha), or deeds (karmana). 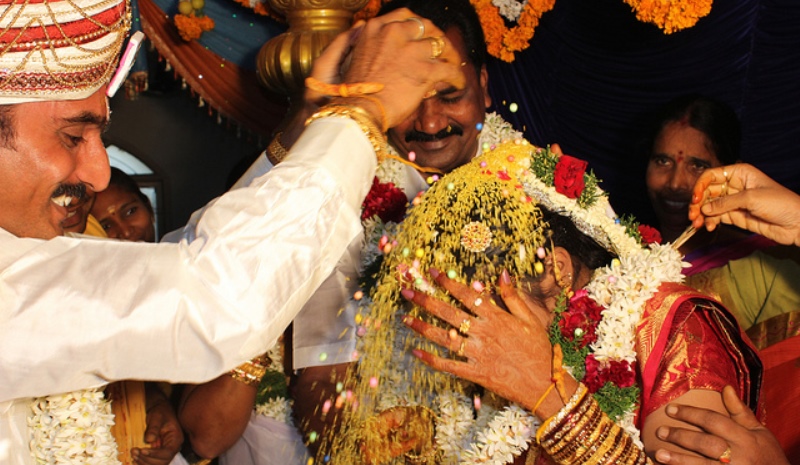 This is the fun part of the wedding ceremony, where the bride and groom shower each other with rice mixed with turmeric. This signifies joy and happiness in the marriage, along with prosperity. The bride and groom exchange garlands, and family members sprinkle rice and flower petals on them, symbolic of their blessings for the new couple. Sapta means seven, padi means step, and this ritual is associated with taking seven steps around the sacred fire. To begin, the free end of the bride’s pallu is tied with one end of the groom’s shawl. The fire is meant to destroy all evils and to act as a witness to the holy ceremony. After circumambulating the sacred fire, the bride and groom hold hands and take seven steps, representative of the seven vows of marriage in Hindu tradition. 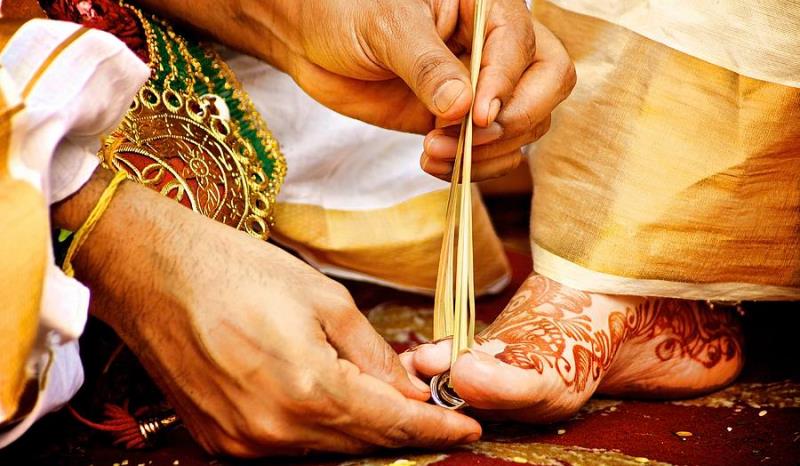 The wedding ceremony is finalized with the groom putting on silver toe rings on the second toes of his wife’s feet. This is followed by making the bride wear a necklace of gold and black beads, which is meant to free her from the effects of the evil eye. The bead necklace and the toe rings together are accepted identifications for a married woman everywhere in India. After this the bride is now officially declared to be separated from her birth family and is now part of her husband’s family. This ritual, called the Appagintalu, is wrought with emotion, especially on the side of the bride’s family. 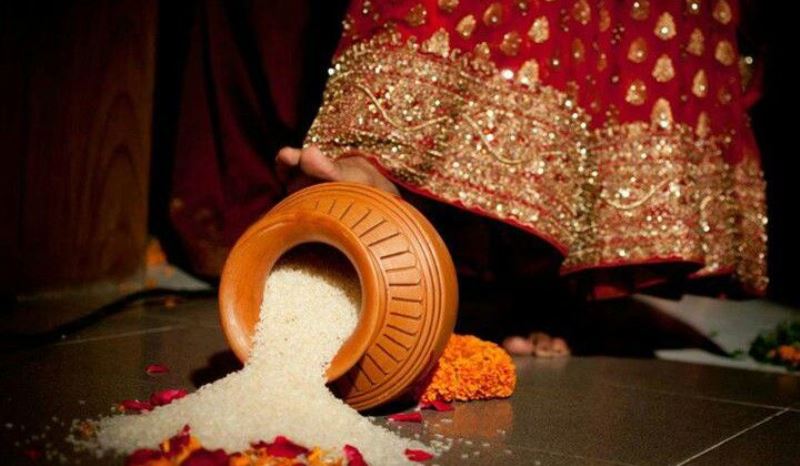 The bride and groom are welcomed into their home through this ritual. They step in with their right feet and are greeted by the groom’s mother who performs an aarti to bless the new couple. The couple performs their first pooja together at home, either then or on the next day.

2. Union of the Mangalsutram

Remember that the mangalsutram had two pendants on a thread? Well, 16 days into the wedding, the two pendants are removed from the thread and strung on a gold chain, separated by a few gold or black beads to prevent them from banging into each other. This represents a harmonious relationship between the bride’s and groom’s families. The bride is expected to bathe and wear new clothes before wearing her united mangalsutram.

And thus begins a beautiful journey of a lifetime! Every ritual has its own importance, and understanding it is so much better than seeing them as random traditions. The main focus is on the couple having a lovely life together, maintaining peaceful relations all around. After all, isn’t that what a wedding should be about?