Being a bachelor isn’t easy – a statement with multiple layers of meaning, but for now, we’ll stick with the less obvious ones. Is planning a bachelor’s party easy? It’s a tiny bubble of memory men look back on when they’re old, from a time when they weren’t bogged down by responsibilities of family and everything adulthood brings into the fray.  It’s an opportunity, to do things you’ve always wanted to. Naturally, planning anything as crucial as the perfect bachelor party can be difficult if not outright impossible. From simple age-old problems like friends cancelling at the moment to romantic boundaries making strip-clubs a strict no-no, it’s very easy for it to end up as a huge blunder if you’re not armed with the best ideas for a bachelor party.  While it isn’t exactly possible for us to hitch a ride to Vegas with Tame Impala blaring in the background, men make do.

Here’s 10 of the best ideas for bachelor party:

Ticking off the most obvious and thought of idea, a camping trip is something that never goes old. A sense of exploration and adventure to clear one’s mind before beginning the longest phase of one’s life, marriage. This is a getaway which depends entirely on your budget; do bear in mind that you don’t pay for the trip expense. You pay for the experience of a life-time. So go all out just this once, stretch your wings and fly. There’s few things in the world that truly wake your senses like setting up a tent in the middle of nowhere, huddled against a fire in the dark with your friends, listening to stories. Far outside the reach of the internet and social media, it makes you feel truly human, in the company of people you cherish. Nothing but the stars in the sky and the howl of nightly animals far off in the horizon, you’ll have a dozen stories to tell when you get back home.

One of the cheaper ideas to see through in the list, a bachelor’s party and alcohol are a match made in heaven. There is a reason why a bartender sequence is pretty much a trope in modern literature and movies, and the reason is the same as why clichés exist – because they’re real for the most part. A night with your friends in a dimly lit setting, with someone on the other side of the counter ready to strike a conversation – sometimes it’s essentially like a therapist with booze. Besides, there’s absolutely nothing more sobering than the worst of hangovers when you wake up in the morning, with a strong but vain resolve to never drink again, you’re almost happy to look forward to a ‘boring’ life!

Few things get men riled up like sports, be it cricket or football.  Organize a small tournament with your friends, keeping spots open for more – the more the merrier! The only thing that might rain on your parade is…well…rain , making this an idea which depends on the season. But, if you’re so inclined, you can manage a game of football in the rain. Fair warning, a lot of dirt and mud will be involved, but I’ve found it to be a particularly therapeutic experience when played with the right people. Few things bring friends closer like a physical sport, in the dirt and the open sky. This works particularly well with couch potatoes who won’t try athletics for the life of them, so go out and let your body do the work!

Laser tag is a fun new thing to do when you’re out of options and are restricted by a tight budget. There’s a laser tag venue in almost every major city, which makes it very easy to enjoy the thrill of airsoft in places where airsoft isn’t a thing. It is however quicker and more newbie-friendly compared to the sport of Airsoft, and compared to paintball (or as some like to say, ‘painball’), it is painless. Originally developed as a system for military training in the United States, players are provided with guns shooting infrared beams, with highly sensitive targets placed on their bodies. The beams shoot in  a wide variety of colors and makes one feel like they’re in the set of Star Wars. So buckle up and aim just right, ignore the childish foolishness of the sport and enjoy!

Suggested read: Questions To Ask Your Wedding Planner Before Hiring Them

A classic, karaoke offers fun and alcohol-fueled embarrassment for a lifetime. Of course, when you’re with friends you’ve known for the better half of your lives, it’s easy to let go and unwind. You need not spend money at exclusive karaoke bars, although that makes for a much more immersive experience. The internet is always at your disposal, from YouTube Karaoke videos to entire Karaoke playlist apps customized to suit your needs. Sing your heart out with friends laughing at your off-note voice, sing like it doesn’t matter- and it doesn’t. Sing till your throat is dry from the words of better poets and laughing at some truly horrible to-be contests for The Voice. Sing!

Another classic, and a game which surely won’t go out of fashion soon enough, all you need is a few cups of beer and a ping-pong ball. The objective is simple, land the ball in one of the cups on the other side of the table. With two or more players each side, when someone in team A lands a ball in a cup, the contents of it need to be consumed by team B. The cup is then removed. First team to empty the table of cups wins the game! It’s a fun and a must-try game which tests not only your ping-pong ball throwing skill but also how well your belly can handle alcohol. Multiple matches are a thing for the veterans, but there’s no harm in trying.

Concerts are a must in any list about bachelor party ideas, simply because they’re an other-worldly experience. You could listen to Katy Perry in the dead of the night and enjoy a metal concert, simply because it’s…for lack of a better word…awesome. Your tastes do not matter, and all the musical elitism flies out the window when you’re in a crowd of people – some of who have traveled miles – who genuinely just want to watch top musicians do what they do best, create music. Crazily enough, it’s even better when the concert isn’t in your state. It opens up the opportunity for a road-trip with your friends, and you can tie your seat-belts for a musically enlightening journey.

LAN parties make up for a sizable portion of what bachelors parties can comprise of. With the rise of fresh FPS (First Person Shooter) games and MOBAs (Multiplayer Online Battle Arena), there is an almost limitless source of fun one can extract out of LAN gaming or lobbies. Hold a tournament between your buddies, so they can gear up for some good multiplayer action – a very sough-out activity for people working long hours. It’s a huge stress buster, and is something which you absolutely can never go wrong with. You don’t even need to be good at the games to have fun, which is a crucial part of LAN parties. You can relax and watch other people’s blunders with a front row seat and laugh as they try to figure out complex mechanics; it’s an amazing group activity anyone with a PC can engage in.

If push comes to shove, you can always watch a couple of movies with your friends. Have a poll on Facebook earlier to decide which movies they get to watch, so there’s no argument. The movies could go from old-school Bergman to the stupidest and craziest Hollywood has to offer. The best part is, the quality of the movies doesn’t matter. It’s even better if the movies you select are downright horrible, you can laugh at the mediocre acting and writing like it’s The Room. Some of these movies are truly so bad that they’re good. It’s even easier with a Netflix subscription, there’s always new content to watch and enjoy with friends. Bonus points if someone happens to have a projector.

An odd one in the list, but something I can’t stress enough. Dungeons and Dragons is a text based game which takes place in your collective imagination. Amidst all the traditionally ‘manly’ ideas for bachelor parties, Dungeons and Dragons is something which will suck you in like nothing else. You get to play the role of a fantasy character, its race and name of your choosing, or typically at the suggestion of a Dungeon Master. The DM then places your group in a setting you have to use brains to get out of, with actions being decided with the roll of dice. You might need 18 points to secure a critical hit on an enemy Gargoyle, or land an arrow on the head of a King, the choices are endless! The king of text based games, Dungeons and Dragons is something you need to try today.

You don’t necessarily need alcohol to have a kickass bachelor’s party, don’t make decisions tunnel-vision’ed. Try something new, something way outside your comfort zone. Those were some of the best ideas for bachelor party, which of these will YOU choose? 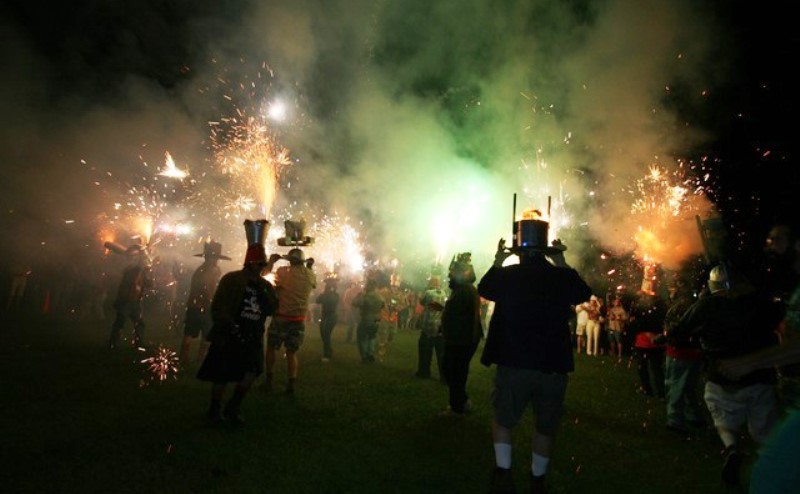