Meaning and importance of Gujarati wedding rituals and traditions

“It’s a symbol of everlasting love
A symbol of forces bigger than us from up above.
Ones undying commitment & trust in another
A special bond that never gives up hope or faith in the other.” ~Heather Twining

Attend a Gujarati wedding and you’re assured of one thing – there’s never going to be a dull moment!! The sheer vibrancy and warmth of Gujaratis are sure to get the most sullen person to smile and shake a leg. Weddings in this state know how to carry on the best of both worlds together; the meaningful rituals go hand in hand with the fun and frolic and everyone is made happy. Gujarati wedding rituals and traditions consist of a confluence of certain South Indian wedding rituals and some from the North as well, all alongside a very dominant Gujarati flavor. Here’s a look at the various rituals that result in one of the most colorful wedding cultures in India. As with any other wedding, the engagement signals the first step in a traditional Gujarati wedding as well. The engagement here takes the form of the Gol (Gor) Dhana ceremony, literally translated as ‘Jaggery and Coriander Seeds,’ reminiscent of an old practice of distributing a small quantity to those present. The couple may exchange rings and the bride’s family gifts the groom a steel container filled with sweets called matli, to signify the start of a sweet association. 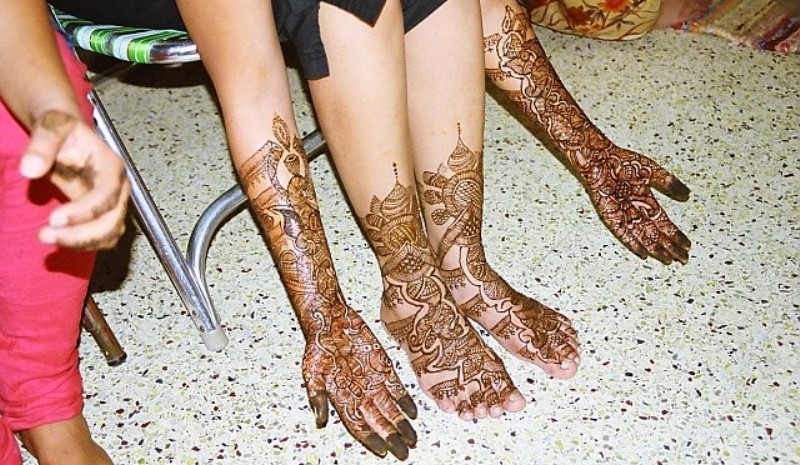 Gol Dhana and Mehendi are more family functions than rituals, and are usually held a couple of days before the actually wedding. Mehendi is the pan-Indian tradition of staining the bride’s hands and feet with henna in intricate designs; the bride’s female relatives generally join in too! Besides a decorative purpose, Mehendi is also said to have cooling properties and helps alleviate some of the stress of the wedding! 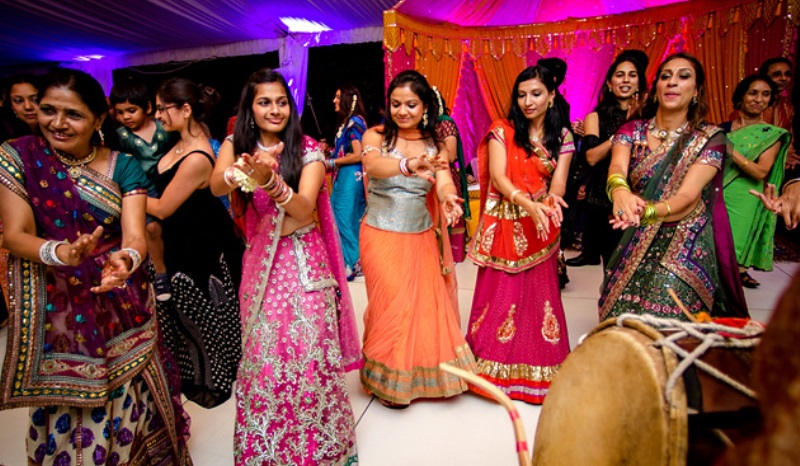 The Sanji or Sangeet is a popular part of Gujarati weddings. This is an informal event and is mainly meant for the family members to get to know each other in a more casual setting. After all, no one can be formal when there’s so much music and dance going around! Traditional drum beating like the Dhol and dances like the Garba are performed and young men and women pair up to dance the night away. 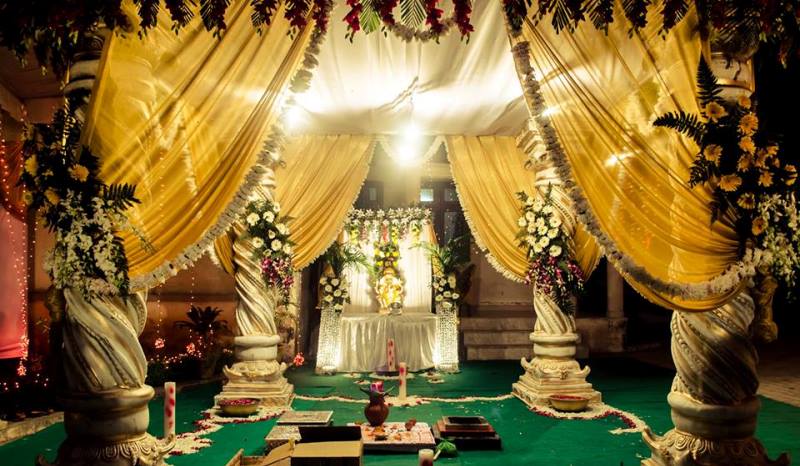 This is a solemn procedure where the ground location of the proposed mandap is worshipped by the bride’s and groom’s family to clear it of all evil influences and to seek the blessings of Mother Earth. This is immediately followed by the Griha Shanti, a pooja or prayer for the blessings of all the planets, a ceremony that is conducted separately at the bride’s and grooms’ houses. 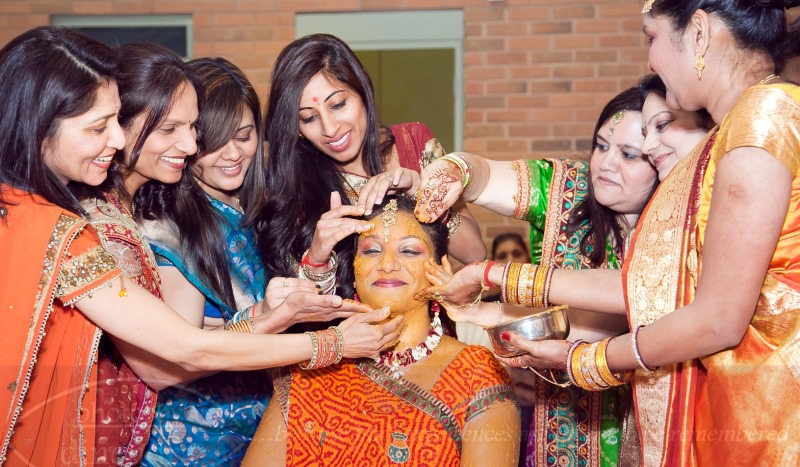 Pithi is the ritual where the bride’s face, arms, and legs are smeared with a paste of sandalwood and rose water

These rituals are usually conducted a day before the actual wedding. During the Pithi ceremony, the bride is made to sit on a low stool, while the women in her family apply Pithi, a paste of sandalwood, rose water, herbs, and a few drops of perfume. This is directly applied to the bride’s skin to make it super soft and glowing; just in time for her wedding night! In some families, men also have a version of Pithi, although the bride’s version is more elaborate. Mameru refers to the bride’s gifts from her maternal uncle, that usually includes silk sarees, jewelry, and choodo – traditional wedding bangles made of ivory. 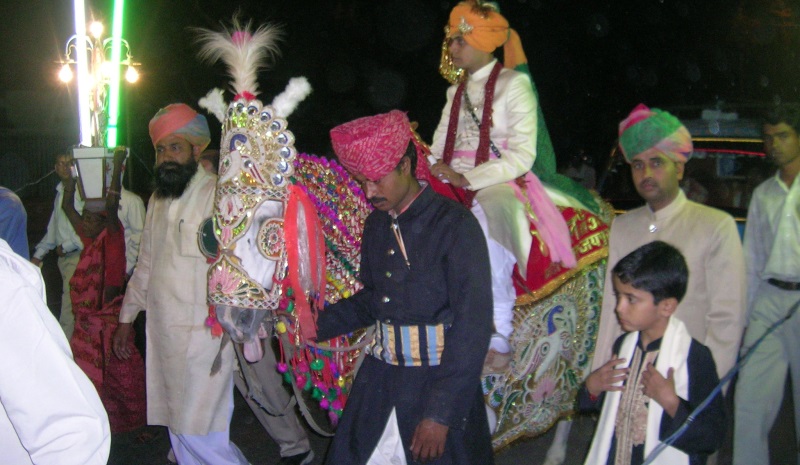 Baraat, where the groom sets out to the bride’s place on a white horse

The groom sets out for the bride’s home amidst much fanfare, with a procession of friends and family members following him, called the baraat. There is usually a lot of loud music, and everyone dances along the way. The groom traditionally sits on a white mare, a tradition for which many reasons are offered. One is that riding on a horse or mare is a show of manliness; another is that the groom needs to stand out from the rest of the baraat; a third is that a horse is more likely to get disturbed by all the noise and commotion as compared to a mare.

The Ponkvu or Jaan is a ritual that makes for some amusing photographs! On arrival, the groom is greeted by his mother-in-law who welcomes him with an aarti. After that, she tries to grab the groom’s nose, while he tries to rescue himself. The reason for this is to emphasize the fact that the groom has come seeking his bride and he needs to show his in-laws the respect they deserve! The bride and groom are ‘introduced’ to each other through the course of a garland exchange. This is again turned into a contest with each family trying to evade the other’s garland! The groom is then welcomed onto the mandap by his future mother-in-law, where his feet are washed and he is offered a glass of honey infused milk, called Panchamrut. This is done to make the groom feel welcomed and special, as he deserves! A curtain is then placed between the bride and groom to prevent them from sneaking a look at each other. While the groom is thus occupied, the bride’s sisters and cousins sneak off with his footwear and demand money and gifts from the groom as ransom. The poor groom usually has no option but to give in! 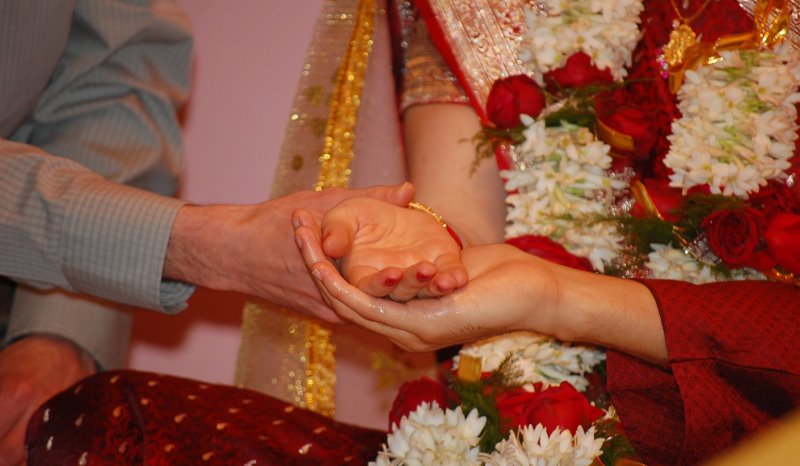 Literally translated as ‘offering the bride,’ this is where the parents hand over their beloved daughter’s hand to the groom. The curtain between the bride and groom comes down and they exchange garlands once again. Here, the groom is considered an incarnation of Lord Vishnu, and the bride, his spouse, Goddess Lakshmi. The bride’s parents pray that their new son-in-law will care, protect, and love their daughter throughout their life together. 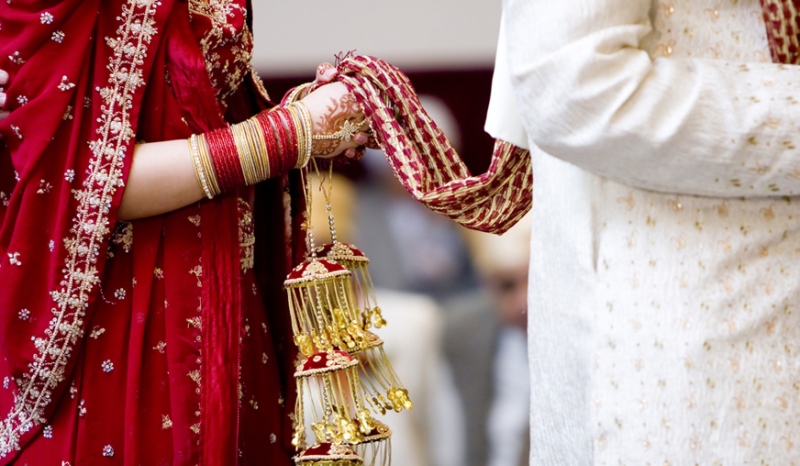 Hasta Melaap refers to ‘joining’ the bride’s life with the groom’s which in this case is symbolized by first tying one end of the groom’s shawl to the loose end of the bride’s sari and then the couple holding hands together. As the priest chants prayers to begin joining the two separate souls into a lifelong bond, family members come forth to shower their share of blessings in the form of rose petals and rice grains. 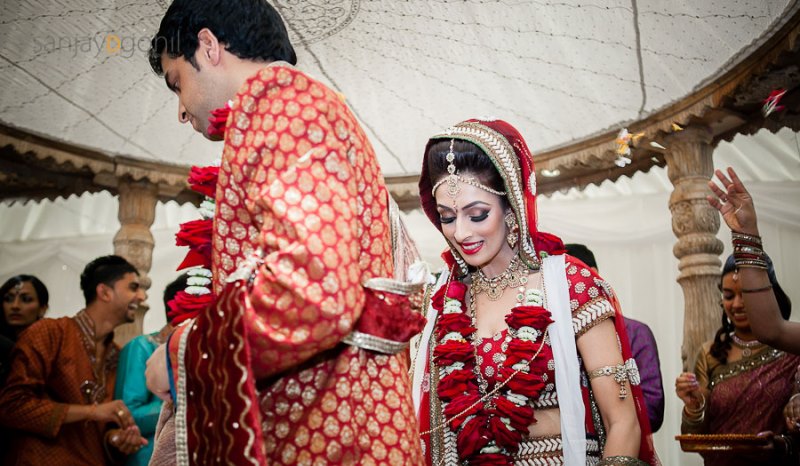 The bride and groom, who are now tied together, purify their bond through the sacred fire, by circumambulating it three times. Throughout the process, they pray for prosperity, happiness, and love while promising to support each other through the ups and downs of life. 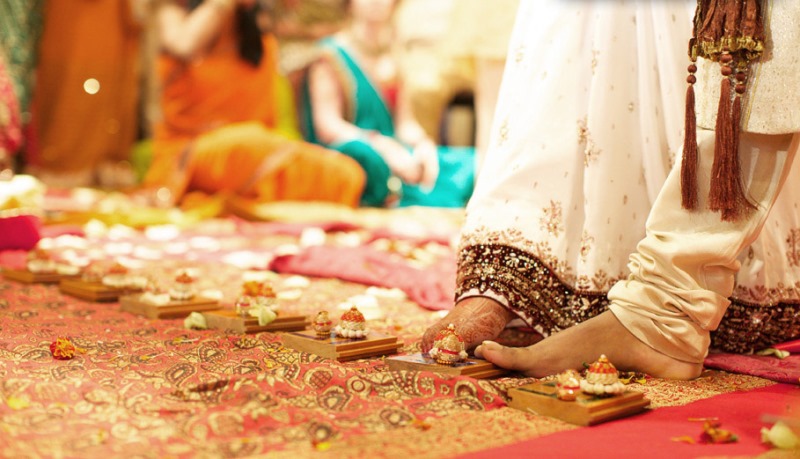 Saptapadi is the ritual where the newlyweds take 7 steps, with each step symbolizing a promise

Sapta padi, meaning ‘seven steps,’ is the final and essential ritual of the wedding. The bride and the groom take seven steps around the sacred fire, reciting the seven sacred vows of marriage, considering the sacred fire or Agni as witness. By the end of the seventh vow, they are considered united as man and wife. The groom makes things official by tying a mangalsutra around his wife’s neck and placing a streak of vermilion or sindoor in her hair, near the centre of her forehead. Once the wedding ceremony is complete, the bride and groom seek blessings from all the elders in the family, after which it is time for the bride to leave for the groom’s house. This is a very emotional time for the bride’s family, as they bid farewell to the little girl whom they raised and has now become part of another family. There are a lot of tears, and finally the young couple set off in a decorated car. 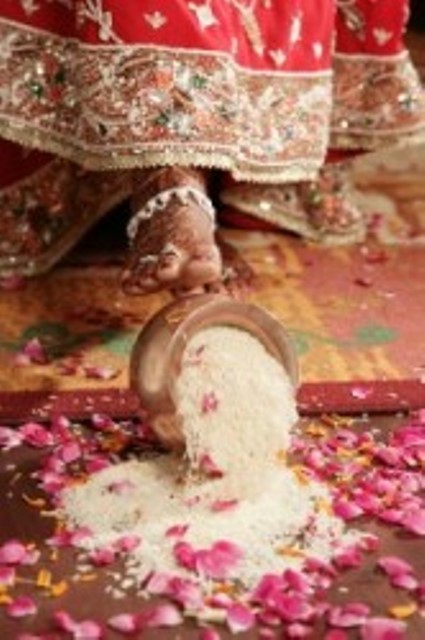 At the groom’s house, there is a festive aura as the family awaits the new couple. The bride’s new mother-in-law welcomes her with an aarti and the bride’s entry into her new home is considered an auspicious occasion. As mentioned earlier, she is now an embodiment of the Goddess Lakshmi, the deity of wealth. To symbolize the entry of Lakshmi into the household, the new bride is expected to knock over a kalash or pot filled to the brim with rice grains. The spilling of the rice indicates that the new daughter-in-law brings so much good fortune that will literally overflow. 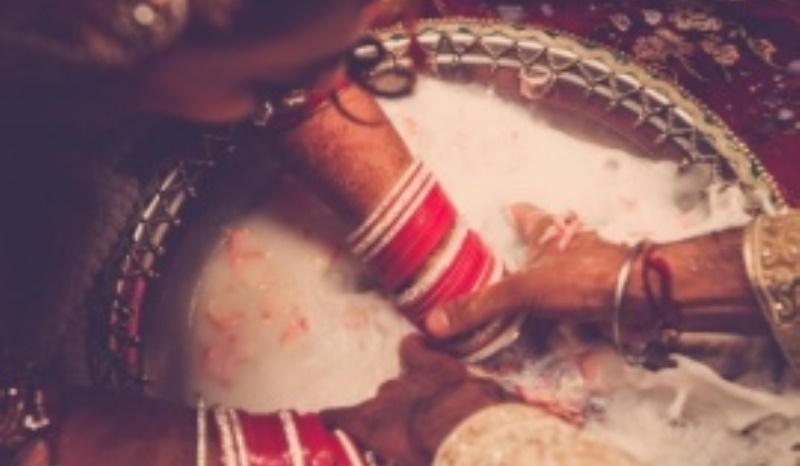 Aeki Beki, where the newlyweds look for a ring in a bowl of milk

The festivities continue with this ritual which is more of a game. A large vessel of milk is placed in between the newlywed couple, into which a ring and several coins are dropped. The couple has to use their hands to search for these in the milk and the finder of the ring is considered the winner and is supposed to be the dominant partner in the relationship. Needless to say, this ritual is accompanied by a lot of noise, cheers, and good-natured ribbing!

You’re probably itching to attend a Gujarati lagan just by reading about these fun-filled Gujarati wedding rituals! This is one of those weddings where everyone can have fun – the guests as well as the family, and of course, the couple tying the knot!