Meaning and importance of Kannada wedding rituals and traditions

“Your hand has already been taken.
You will never be forsaken.
My life long promise will always stand.
Until my last breath I will always hold your hand.”

Indian weddings literally come in all shapes and sizes, ranging from small, intimate single day ceremonies to elaborate events spanning nearly a week! Kannada weddings fall somewhere in between on this scale, with rituals getting priority over grandeur. While they share a lot in common with the rituals of neighboring Andhra Pradesh, Kannada weddings are a slightly simpler version and are lovely occasions for extended family to get together! Karnataka is a large state with different kinds of terrain and this has resulted in various communities with their own unique sets of traditions. While each one celebrates weddings in their own style, some rituals are common across all groups. Here’s a guide to the meaning and importance of Kannada wedding rituals and traditions. 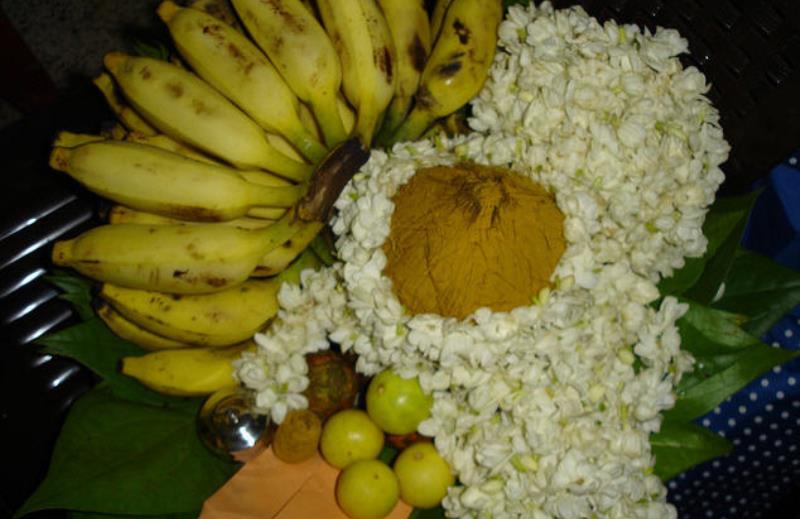 This is the engagement or more accurately, the formal start of the upcoming nuptials. The groom’s family visits the bride’s home with gifts for her that include clothes, fruit, and a coconut. The bride’s family also reciprocates with a dhoti, fruits, and coconut for the groom. The family priest attends to the religious proceedings of the event and fixes a time and date for the wedding based on the horoscopes and upcoming auspicious days. The ritual is made official with a plate of betel leaves and areca nuts or supari. The betel leaves are considered to be indicative of prosperity and freshness, and the areca nuts represent strength and longevity. Besides, the combination of both is considered an inseparable pair, with the betel leaf representing the female half and the areca nut representing the male. 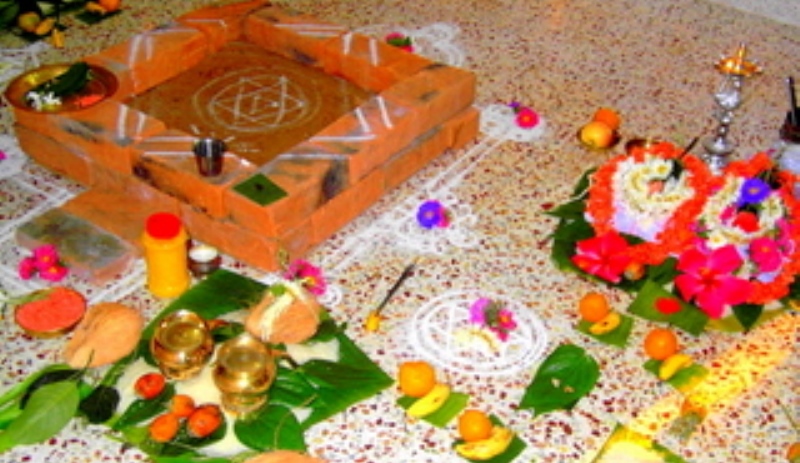 This is basically a pooja or prayer conducted separately at the homes of the bride and groom a few days before the wedding. The purpose of the Naandi is to ensure a smooth and obstacle-free wedding and to keep the bride and groom protected from all evils. The pooja involves a coconut and a copper pot or kalasha. The pot is believed to contain Amrit or the nectar of life, to ensure that the couple is blessed with all the good things in life like abundance, health, wisdom, and longevity. The first wedding invitation is offered to the Almighty God to gain His blessings. 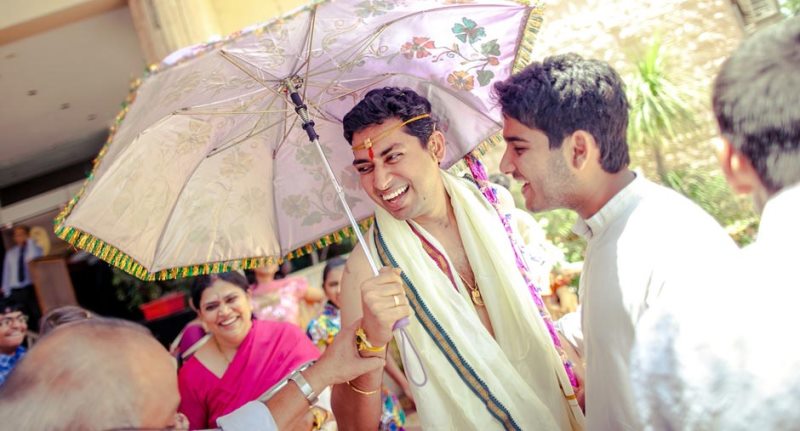 This is a playful ritual which adds some fun and humor to the general wedding proceedings. The roots of this ritual go back to the days when young boys were sent to learn from wise sages and on their return they could choose between accepting celibacy or family life. The groom pretends to get angry and become a celibate or brahmachari since no one is helping him find a suitable bride! As he prepares to leave with an umbrella, a walking stick, and other essentials for his purported travels, his maternal uncle intervenes, saying that the perfect woman for him has been found. The groom obviously relents and comes back to get married to his beautiful bride! 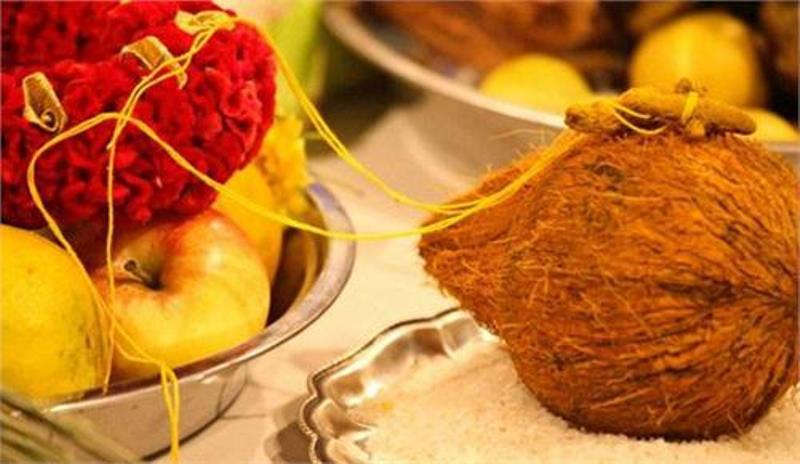 This ritual was traditionally carried out before the groom and his family left for the bride’s village, but today, this is performed just before the groom leaves for the wedding venue. The Dev Karya is basically a pooja where everything required for the wedding ceremony are laid out in front of the Lord Ganesha to get His blessings. Most Hindu occasions begin with the worship of Lord Ganesha since He is considered to be responsible for making any endeavor successful without any obstacles. This is usually followed by applying a turmeric paste on the bride and groom in their respective homes. The purpose of this ritual is to purify, since turmeric has anti-bacterial and anti-fungal properties. It also helps the bride and groom glow and look great on their special day!! 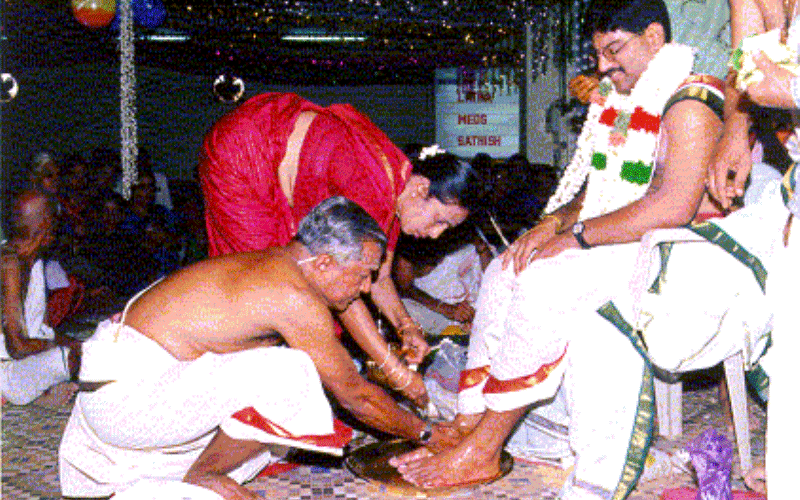 Mandap Puja is the pooja done to purify the wedding venue or the mandap and is carried out by the priest. This is essential before the wedding can proceed further. On the wedding day, the groom is considered to be a reincarnation of Lord Vishnu and is thus worshipped. He is escorted to the mandap by his future father-in-law, who then does the pooja after washing the groom’s feet. The groom is then presented with a silk dhoti or pitamber, which he is expected to wear. 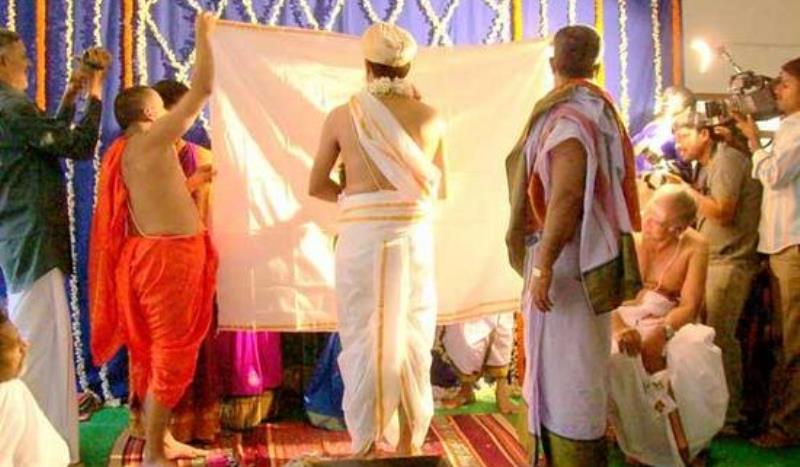 The bride is then escorted to the mandap with her face covered by a fan of peacock feathers, usually held by her sister. A curtain is placed between the couple so they don’t see each other’s faces. Once the marriage mantras are recited, the curtain goes down and the bride and groom garland each other. The auspiciousness of the event is ensured by the groom’s sister carrying a copper pot or kalash with betel leaves, coconut, and Kombu Gindi.

This is a unique Kannada custom that is symbolic of the bride’s parents giving her hand in marriage to the groom. The bride’s hand is placed in the groom’s hand, followed by a coconut and betel leaf placed on top. The bride’s parents bless this union by sprinkling holy water or dhara on top of the couple’s joined hands. In many ceremonies, water signifies purity and is representative of the churning of the ocean in mythology, which yielded a pot or kalash filled with the elixir of life. Holy water is used for this purpose, preferably from the Ganges River. 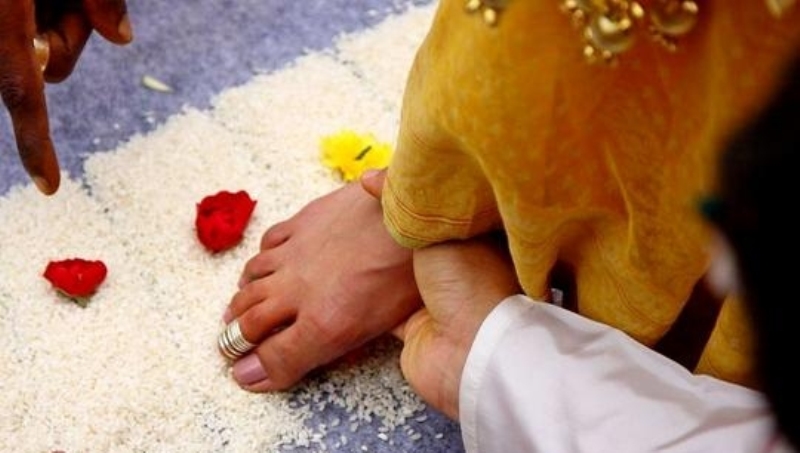 This is the final and most important part of a Kannada wedding ceremony. One end of the cloth covering the groom’s upper body is tied to the loose end of the bride’s pallu, highly symbolic of their being ‘hitched’ together! Then they circumambulate the sacred fire seven times, with the bride following the groom. The number seven is considered highly auspicious in Hinduism, and is related to the seven colors of the rainbow, the seven days of the week, and the seven notes of music. The saptapadi is followed by the groom tying the Mangalsutra around the bride’s neck, and they are now officially man and wife! The Mangalsutra is representative of the bride’s new marital status and is a treasured piece of jewelry by most Indian women. 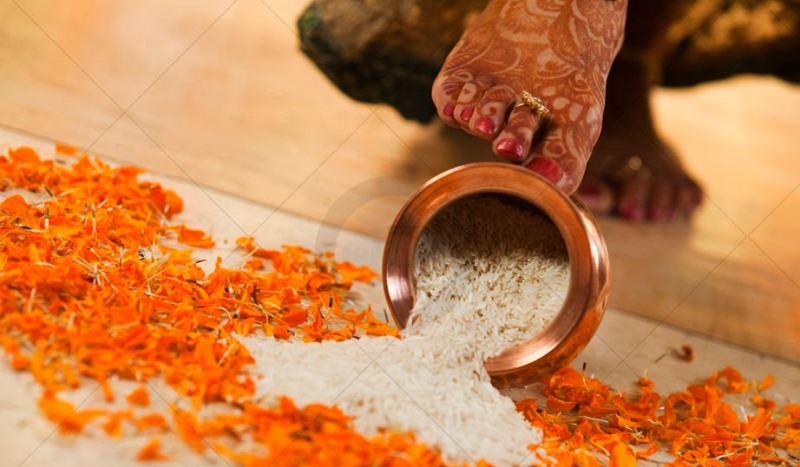 Post wedding, the new couple is welcomed into the groom’s home by his family. A kalash or pot filled with rice is kept near the entrance inside the house, and the bride is expected to kick the pot forward with her right foot, spilling the rice grains on the floor. This is symbolic of all the prosperity the bride is going to bring into her new home, so much so that it’ll overflow! 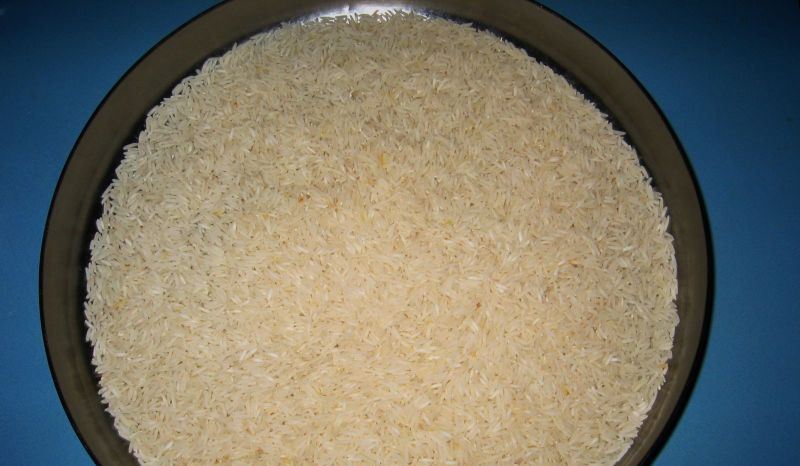 To emphasize the fact that the bride now completely belongs to the groom’s family, a name changing ceremony is conducted at the groom’s home where he chooses a new first name for his wife and uses a ring to write it on a plate of rice.

Rituals add a whole lot of depth to a wedding, especially when everyone involved is aware of their meanings and history. But thanks to us, you are now aware and you’ll know exactly what’s going on the next time you attend a lovely Kannada wedding!