Megha Rao: The Poet With Words That Smell of Fire

Megha Rao is a poet who shakes your very foundation. As conventional poetry dictates, and as my preference goes, I have never quite been fond of people ‘capitalizing words’ in order to deliver impact. When I first discovered Megha Rao inculcating that into her poetry, I was surprised by how well I liked it. She is a force to be reckoned with, an unstoppable powerhouse, and an entire movement in herself. Each one of her poems hit home, delicately, carefully, and stay there forever.

Here are excerpts from 12 of her poems that have found a special place in my heart: 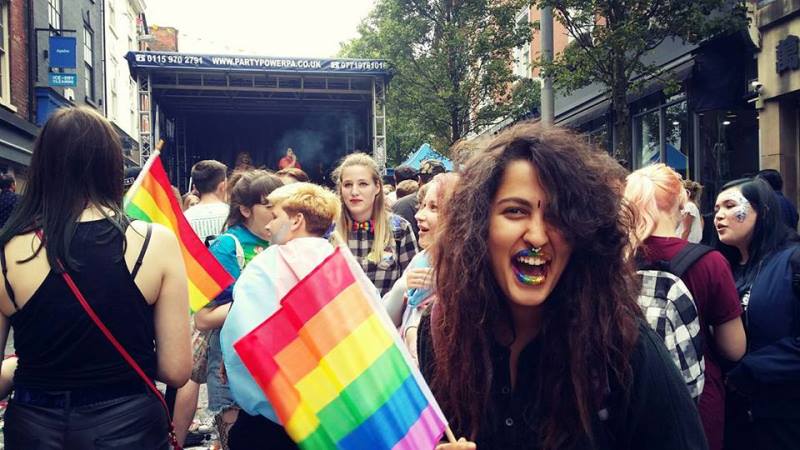 “you told me that nobody could love me

without freezing to death first.

i asked you why you were

even though i had

they couldn’t protect other people

and it never stopped raining.”

I never want anybody to see me at my lowest, lest I should witness their love filter out. We promise each other ‘for better or for worse’, ‘in sickness and in health’, until your back is up against the wall. People bail on you. People leave when the shit hits the stratosphere. For the longest time I was apologetic for my own mind, my feelings, and everything that was unacceptable to people I loved. Now, I know that it may never stop raining in my part of the town, but I don’t need a pretentious teenager to hold the umbrella for me.

“Stretch from the Pacific to the Gulf of Mexico until a Spanish invasion.

You have your father’s eyes. Beautiful, but always broken into.

19:47 and your blood is saffron and what’s left of the kitchen is

cabbage and okra and the Khyber rifles at Jamrud. It is the year 2018

tubes because they think private hospitals might steal your kidney…

…You are not your country’s headline. You are not the forced pregnancies

Or the chakra, because you are not the flag. And you know you are not

the flag because you are too torn to be hoisted.

The therapist asks you, what have you been drinking?

“Heaven is soundproof”, Megha writes. As the Third World War sits on the fence so close to home, can you deny it? Will any of us ever “survive earth”? We are made synonymous with events that happen in the name of our country, our religion, our gender. We are made of and never allowed to forget about our trauma. As the “jam jar” full of memories rocks back and forth on the therapist’s desk, what chaos are you carrying under your skin?

“to the man I will one day spend my life with…

It is so important for parents to be soft, and accepting. Don’t just show up to cheer for the important races, but also stand by them when they fall of the trapeze, or get their heart broken. The emotional taboo on youngsters produces constricted adults with unresolved issues.

“in the dining room,

before my brother eats

the last piece of fruit for the day

i tell him, ‘they threw acid on

and my mother scowls and asks

‘pass me the fish curry,’ my uncle says

and it’s supposed to mean the conversation is over.

‘did you watch modi’s speech on the news?’ my uncle asks papa

‘i love the soup, you have to give me the recipe!’ my aunt tells amma

and two conversations hover over the table and i drag

my body out of the room

before my brother can say

with his mouth full of rice,

‘so just because you talk about

marital rape and sex and periods

you think you’re a feminist?’

Find me the right time to talk about people dying. Find me the right time of day where it befits me to remind you of the student who killed herself over a B grade. Who are you to set standards for my Feminism? We run by a fire that burns on the screams of our sisters whom you burnt at the stake. There is never a right time for violence, and never a wrong time to start talking about the humanity’s failures.

if he’s ever been

“i’m in love with this

for the stray dogs

to eat but she

How rare and beautiful is a person who is utterly, unapologetically in love with life? Somebody who ‘wants’ to wake up to the next morning, as opposed to simply ‘having to’. Imagine being strong enough to let your shoulders stoop, sit on a curbside, take off your running shoes, and just watch the world pass by in all its glory. I love people who are not blind to the worlds beyond their own; who look to other human beings as one would to favorite books, stories, and precious memories.

“and i wanted to tell you that

as beautiful as i made it seem

because there’s nothing beautiful

asking the axe to

stay a while longer

or a fishbowl under the

delusion that it can hold

Recovery is messy. Rebounds, disappointment, lonely nights when the calendar keeps flipping backwards. Healing does not feel like a celebration until the healing is well in motion. When I catch a whiff of the scent I once loved, I stop on the road and look around before I can stop myself. Sometimes, I even forget where I am, and only remember when a car speeds by too close for comfort. I’m taking baby steps. We all are. And someday, we’ll get to the top of the mountain and roll this emotional baggage into an unnamed valley.

but nobody talks about

his lonely nights in the cemeteries

and then in the end,

told her that she would still have his sister

his hands sick with cuts

his mind sick with worry

nobody talks about this self harm

because TEENAGE SUICIDE or any suicide for that matter is

so they tell you to be happy

TALK ABOUT SUICIDE. Instead of investing your time and mental energy into gossiping about the circumstances of their ‘affairs’ or ‘financial status’, look around you and find somebody to save. The worst thing you could do to any living thing, is dismiss their struggles as “unimportant”, or “childish”. You know nothing about the torture in somebody else’s head. You could have “been there” and “done that” a million times, but don’t speak like you deserve a fucking trophy for being in more pain than the helpless child confiding in you. We need to get off our high horse, and start helping those who need us, instead of speculating and sending condolences that are not worthy of their name.

“i am the ugly truth

the need for cosmetic surgery and terrifying diets

for breast enlargement and labiaplasty

everything i do is a provocation

i am not the transition to womanhood

i am the commodity manufactured to elicit male desire

the focus on my frame

i am the private part

that destroys the idea of me

i am the bone structure, not the blood.

i know i am supposed to be cheekbones and pink tongues

but i am tan lines

They say that puberty hits women like a truck. In reality, it isn’t the biological process that slaps us, as much as our own self-esteem. We spend nights in high heels, making it look effortless, making it look “natural”, without realizing that we are standing on an iron maiden for the validation we do not need. It is normal for butts to have stretch marks. It is a part of our body, not a marble counter-top we’re cooking our dinner on. Your aspiration should not be the literal representation of a photo-editing app.

when he saw a woman burning

her tongue to stop her poetry.

All evening, the fire burned on

and I sat in front of it, cross-legged

and Mending Wall by Robert Frost

my waist no longer a multiplication table

for anyone who demanded that

my eyes no longer a testimony to

the twelve-year-old who said she went to

school for ten days until she had to stop

because there was no one to collect cartons

to support her family in Kabul.”

Why do genitals dictate worth? Why does the female brain not ‘deserve’ or thought ‘incapable’ of housing the genre of knowledge attributed to men? Why is it that when I say ‘astrophysics’, you think of a male scientist, while ‘sewing’ reminds you of a woman? We are a country of people dying in the quicksand of gender roles. It is high time that daughters stopped paying for their existence with their dreams.

Megha Rao tears European standards of beauty like it’s her staple diet. How can you not be angry with tightly spun, heavily ornamental, grievously artificial idea of you that the world stuffs into their pockets? I am offended that multi-million dollar companies believe that I have to choose between breathing or looking ‘flawless’. If my hips overflow the boundaries of your ‘preference’, then you can clear out of my line of vision. Anybody who makes me cringe at the mirror, is unwelcome in my life.

to the Mona Lisa in a

arguing through the night

as Marilyn curled up in a sofa

wearing a t-shirt that screamed

there will come a time

when I don’t think about

was transported to in Germany.

My therapist tells me,

there is more to me

and I want to believe her.

So I hope your new girlfriend

How do you reconcile with having a world tear into two different parts? How can I not think of the palms I once loved, the lines of which I swore I could read forever. How can anybody forget the family they had to suddenly stop visiting? Something stirs us one night, and we remember that it is their birthday tomorrow. We subconsciously remove ourselves from habits and things they liked, hoping to forget it. The human mind is a mysterious device. It never quite allows peace.

and you said to me,

and your favourite book was on your lap

but the spaces between us grew

and i wanted to

ask you why nobody

of their favourite book

or any book for that matter

but you were already gone

Megha performs spoken-word poetry, writes for Terribly Tiny Tales, uploads her beautiful work on Facebook and Tumblr, where she can be followed @barela 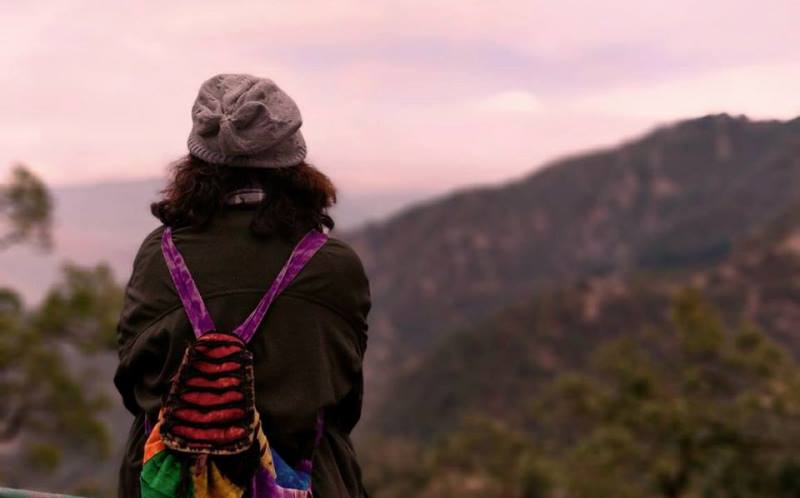 Article Name
Megha Rao: The Poet With Words That Smell of Fire
Author
Meghalee Mitra
Description
Megha Rao is a poet who shakes your very foundation. She is a force to be reckoned with, an unstoppable powerhouse, and an entire movement in herself.