The Perks Of Being A Wallflower: Did The Books Charlie Read Help Him With His Mental Health?

“It’s strange because sometimes, I read a book, and I think I am the people in the book.”

And this is how Charlie summarizes every reader’s plight. The Perks Of Being A Wallflower is a coming-of-age tale about a fifteen-year-old boy who writes to an anonymous address and in these letters, he deals with his fears of starting high school without any friends, his confusion as he grows and learns more about himself, those around him and his all-consuming internal mental turmoil. With progression of the story, Charlie, in spite of being an introvert, finds friends in Sam, Patrick and also his English Teacher, Bill. His music and books play a vital role in his life. He talks of his sister, her boyfriend, his parents, his previous life and his aunt Helen. Failing to understand why people act the way they often do, Charlie has a mature yet child like temperament and writes in a simple, warm, lucid language and the reader can’t help sympathizing. His first kiss and his newly acquired driving license are markers of his external maturity too but not even those days when he is sarcastic and cynical can mar his child like curiosity that makes him one of the most likable adolescent characters in Young Adult fiction.

“I am very interested and fascinated how everyone loves each other, but no one really likes each other.”

However, neither his unique child-like ways nor his books and not even his loved ones can save him from being impaled by his dark and tragic childhood memories that he had been suppressing for years. Finally, he acknowledges them and has a severe mental breakdown. In the end, he is on a path of recovery from mental trauma that leaves the reader optimistic.

“So, this is my life. And I want you to know that I am both happy and sad at the same time, and I’m still trying to figure out how that could be.”

In The Perks of being a Wallflower, Chbosky brings up issues that were not talked about enough at the time when this book was written: homophobia, abuse, bullying, parental pressure and their inability to understand the psyche of their own children’s minds due to the patriarchal mindset which has an unhealthy amount of grasp over our thought process. Charlie’s best friend kills himself over the summer and he recalls witnessing a date rape at one of his brother’s parties. His sister’s boyfriend, Dylan, made his girlfriend mixed tapes that she didn’t listen to and he hits her sometimes while she continues to be with him. Patrick’s boyfriend refused to acknowledge the bond between them in order to salvage his ‘reputation’ in front of his ‘friends’, where even retaliates in front of his team and laughs mockingly when one his teammates happens to calls him a faggot in school because gay people used to be social outcasts and considered anomalies of the human race. The sad part is even today in 2018, in some parts of some countries, people continue to have the same mentality and the same opinions. Patrick’s boyfriend’s father physically abuses him when he discovers them together, embracing each other. The high school drama depicted in this novel sure is dreadful and makes one realise how extremely toxic and complicated American high school lives are as opposed to how carefree and breezy they should be.

Unfortunately, the story grows grimmer when Charlie starts indicating the fact that something was not quite right with him, especially the relationship he shared with his aunt Helen, of whom he had fond memories. At the end the reader is just as shocked as Charlie’s parents when they realize that his aunt Helen was not just disturbed woman who was abused by the men in her life but in turn used to sexually abuse Charlie when he was a child which he did his best to block out (not consciously) but he began to exhibit PTSD that was rooted so deep in his life.

Why did the book hit home so hard? Perhaps, because people do not admit enough to being a wallflower: To watch, to listen, to understand.

We all bottle up our feelings and continue treating sensitivity as a weakness. It is sad that human race thinks of being sensitive as something embarrassing, as if it is feminine to be sensitive, as if being ‘feminine’ is wrong. Biological differences between man and woman were meant for survival of the human race and nothing more. Humanity, however, has evolved beyond procreation. They now have ‘personalities’ and skills sets which are not and should not be defined by one’s genitals. Masculinity, Femininity: these are social constructs of patriarchy which continues to focus on the differences (and not diversity) between man and woman instead of finding similarities that unite us all because a patriarchal society wants its women toeing the line. And the day we all begin to acknowledge the fact that the source of our strength is that we are sensitive, that we are compassionate, that we are capable of love, is the day we all will evolve as artists, as scientists, as a people and be liberated from these worthless social norms and constructs. What is normal to the spider, is chaos to the fly.

Charlie is a wallflower but as soon as he starts participating and on certain days, appreciating life for what it is, he decides not to be a doormat.

“So, I guess we are who we are for a lot of reasons. And maybe we’ll never know most of them. But even if we don’t have the power to choose where we come from, we can still choose where we go from there. We can still do things. And we can try to feel okay about them.”

Being a wallflower also makes you a person who finds relief in fiction, in the books he reads and the music he listens to. How many of us have gone through a bad time and yet have a grip on reality just because we hold on to these for escaping the horror that comes along with reality?

Charlie talks about a number of books. The first book he is given is Harper Lee’s To Kill a Mockingbird and perhaps this book teaches him about isolation and what good comes out of social contact and good deeds.

The translation from childhood to adulthood is bizarre and Peter Pan is the best literary metaphor that symbolizes this component. The blues, the depression, that bizarre, annoying, frustrating emotion where you feel uneasy in your own skin where you have no idea what you’re doing and which way you’re headed: is not just associated with adolescence, it’s the very essence of growing up and you never really stop growing up.

Other books that bring out the proverbial wallflower from within Charlie, that make charlie graduate from being a spectator in his own life to being a participant, are Salinger’s The Catcher in the Rye and F.Scott Fitzgerald’s This Side of Paradise.

One can find friends in books. However, can one cope with mental illness by befriending literature? No, one cannot. Mental illnesses have a myriad causes for their occurrences: heredity, breeding, trauma and physical factors like the environment one finds oneself in and physical health. But there is one common trait that accompanies most mental health issues and that is the incapability to come to terms with oneself or to accept the present.

Books are the best way to keep bad days away, to avoid the existential crisis on days. After all, a mind is a devil’s workshop only when it is idle. But if keeping busy and bottling up pent up emotions was the healthiest way to cope, people could have been far more content.

Books might the perfect way to get by but it is an indisputable fact chronic mental illnesses can only be cured by diagnosis, treatment and/or therapy. And the sooner people embrace this, the less will be their misery.

Nevertheless, the beautiful person that Charlie grew to be, the people who we are, are all larger than the some of our parts. The books that we read, the music we listen to, the ideologies that we believe, the choices we make, the poetry that we love- these are what make us the people we grow up to be. And poetry is language at its epitome of beauty.

Perhaps, of all the books that Charlie reads, this piece of poetry quoted in the book that moved Charlie makes Charlie the infinite character he is. The Perks of Being a Wallflower will always be among the greatest Young Adult books ever written.

when he asked her to go see Santa Claus
And the kids told him why
his mother and father kissed a lot
And his father never tucked him in bed at night
And his father got mad
when he cried for him to do it.

Once on a paper torn from his notebook
he wrote a poem
And he called it “Innocence: A Question”
because that was the question about his girl
And that’s what it was all about
And his professor gave him an A

but he kissed her anyway
because that was the thing to do
And at three a.m. he tucked himself into bed
his father snoring soundly

he could reach the kitchen.” 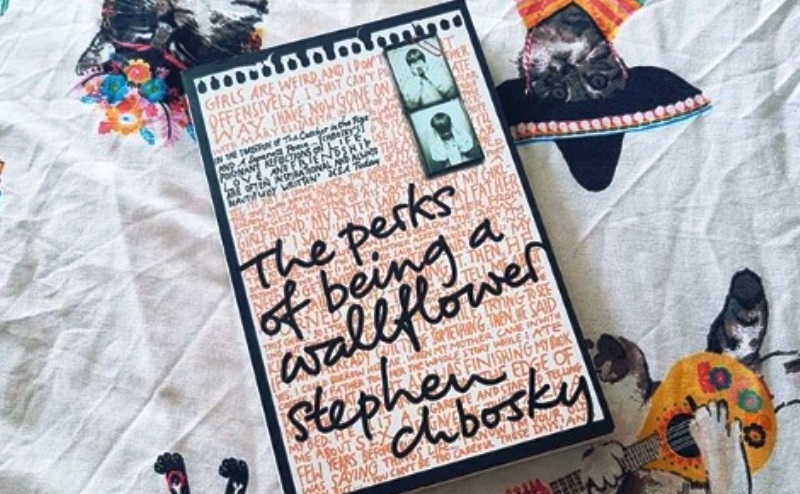