Of Men Who Cook: It Is Okay For A Man To Be In The Kitchen, If He Wants It

Now, now, I know there are women out there who are extremely territorial about their kitchen kingdoms but maybe that’s because the men in their life are more often than not intimidated by the stove and wouldn’t get through a moment in there, without spilling, splattering, burning or worse, cutting something. Most likely, themselves.

For others, the idea of a man flipping pancakes or stirring up stir-fry for the family is well, yummy. There is something incredibly wonderful about waking up to the sweet aroma of buttermilk waffles browning and turkey bacon sizzling in the skillet, on a lazy weekend. Even more so when a harried weekend means your husband or son can fix themselves a decent meal without breaking a sweat!

Suggested read: I am a woman and I hate to cook, so what?

Think of it- men taking to outdoor grilling because throwing down coals, dousing them with lighter fluid and setting them ablaze so they can sit back and wait until the air smells of charring meat is sexy, to say the least. Transpose the scene indoors and the image of a man throwing on an apron to fix you a special dinner because you called in and told him things were crazy at work is umm, (forgive the cliché) really sweet.

And even if I turn down the voice of my hormone factory (sshh..) that’s constantly churning out flattery for this special (and sexy) breed (ssshh, I said), it remains true. Men who cook are wonderful. Not because I wish to exalt them to the status of demi-Gods for something that’d have been really normal, had gender roles not been a thing- but  because these men take upon themselves not only the task of challenging traditional domestic roles but also honing and developing a life skill that is as important in themselves as in women. And mind it, am not talking of men who cook the occasional restaurant-staple for an audience of friends or those that indulge a paleolithic­ dieting throwback because the garden shed is their barbecuing haven. I am not even talking of the guy who flaunts his culinary skills because it’s the weekly dinner-party duty calling nor of the man who wouldn’t break a sweat when put in a kitchen, any more than when he’d be in a board meeting, crunching numbers.

I am talking of men who cook- because they want to cook.

Of course, there’s still a cultural backlash (which is especially surprising given just how many professional kitchens are headed by male chefs) which views men who take to cooking some grub in a house to be no men at all. In fact, according to Penny Lancaster, model, photographer, and other-half to Rod Stewart, “Putting the apron on robs men of their masculinity.” She says that a man’s role is to be “the hunter gatherer, the macho man, looking after the family.” But that’s matter for another post.

The exhilaration of witnessing flames ready food has been drilled into human DNA. Travel back in time to caveman ancestry and the idea in this loopy claim will begin to look ridiculous (if it wasn’t so already). In fact, you only have to flip through the pages of anthropological research to find all the evidence you need to prove that men who cook aren’t really outliers. A cursory look at Catching Fire: How Cooking Made Us Human, by Harvard professor Richard Wrangham is enough to convince anybody of the primacy of cooking skills and the startling fact that throughout our history these have been, if not ‘manly’ virtues, at most gender-blind.

Just as women who love to whip their doughs a certain consistency are deemed winners (again, a handdown of gender- and why?), men who want to achieve a perfect crème brûlée are no ‘losers.’ Let’s cut through the binary and ask ourselves why we are more forthcoming with women who wish to remain single, soar in their careers or even, change their sex than with men who are doing no less in the direction of real, meaningful freedom by choosing to be who they are.

Nowhere is this dual standard more conspicuous than in the domestic realm.

Not only is the rise of ‘men who cook’ a wakeup call for most men who negotiate cooking duties (for once a week) and then, leave the dishwater flooded for whoever wakes up first the next morning (no prizes for guessing who it is) but also an unprecedented breakthrough in the way domestic duties are divvied. When a woman is no longer wondering which ingredients in her refrigerator can be used to fix a decent meal when she gets home, while her boss is telling her the client requirements for her next project, everybody benefits.

Of course, just like with women, so with men- I am not saying all men should convert. I am not saying that if frying chops burns your confidence and sends them up in thin wisps of smoke, you should do it. All I am saying is that if you do have a Julia Childs inside, thrashing to come out, release her from the cage. No social dictate should shame you into doing otherwise.

Suggested read: 9 types of shaming behavior women need to STOP subjecting each other to

In fact, the blessing of being born in an age of unfettered possibilities is exactly this. If you can’t do something, you can outsource it. You have that luxury. But if you can and want to, you need not repress the urge in fear of judgment. Should we allow our men to breathe free from patriarchal dictates (yes, they harm them too) too, we shall possibly see a day when men who cook strive for man-upmanship in saucepan swagger, being armed with a non-stick pan and a can of canola cooking spray, whose mozzarella is better and who whips the best crème fraîche!

And I have a *feeling* I will find this competitiveness sexy! And Lancaster says cooking wasn’t macho! 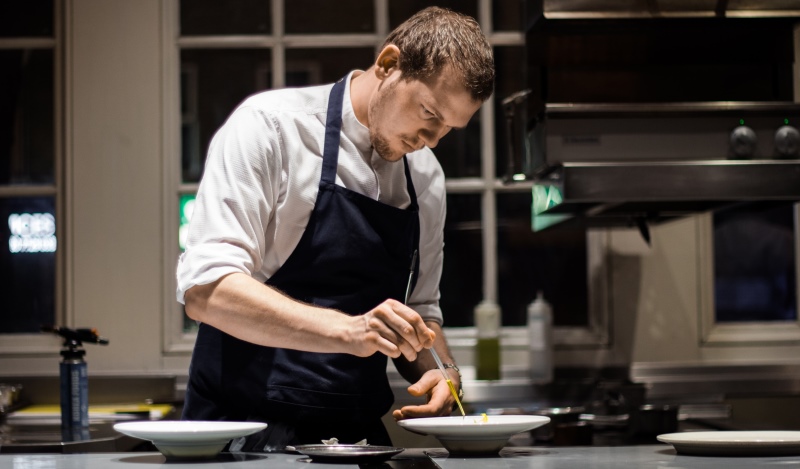 Article Name
Of Men Who Cook: It Is Okay For A Man To Be In The Kitchen, If He Wants It
Author
Sejal Parikh
Description
I am talking of men who cook- because they WANT to cook.