Before we get into what being a bisexual in India means and entails, here are a few terms you should know:

According to the Merriam-Webster dictionary, heteronormativity implies:

of, relating to, or based on the attitude that heterosexuality is the only normal and natural expression of sexuality

To put it simply, it implies being forced to adhere to gender stereotypes in an attempt to be considered “normal.” A person with a p*n*s must be “manly” while women should be “feminine.” It plays into gender stereotypes, and promotes the fact that heterosexuality, that is a relationship between a man and a woman is natural, implying anything else is unnatural.

According to the Merriam Webster dictionary, bisexual means:

of, relating to, or characterized by sexual or romantic attraction to members of both sexes; also : engaging in sexual activity with partners of more than one gender.

Bisexual erasure or bisexual invisibility is the tendency to ignore, remove, falsify, or re-explain evidence of bisexuality in history, academia, the news media, and other primary sources. In its most extreme form, bisexual erasure can include the denial that bisexuality exists.

To put it simply, it is the tendency to discount the very existence of bisexual people, by claiming that bisexuality is a myth. It cannot exist.

A Step-by-step Guide To Bisexuality In India Today

Consider this my coming out letter. It’s been a while since I came to terms with the fact that I am bisexual. I am also a middle-class Indian citizen. I have dreams and expectations and goals and ambitions, and I have been moving through society for the last 20 years, just as the person next to me has. However, do I feel entitled to a story that is worth cataloguing, more than the average person’s? Perhaps, for this is a story of survival.  It is a story of coming to terms with who you are, and being okay with it. It is a story of thousands of people living in an undercurrent of sameness in this country.

I apologize for the title of the story; this isn’t a step-by-step guide to bisexuality. It is for the sake of the pragmatism that this country embodies. India is a country teeming with dreams. It is a country of achievers, where most of the educated middle-class aspires to greatness in all things in life, whether it is academics or careers. We are a methodical lot, methodically moving towards achievable goals, with an involved and informed parental generation, and supportive peers and relatives. A standing joke amongst the uncles in my family goes “MS not Mrs.” However, progressive as that sounds, an undeniable fact is that sexuality is a taboo topic of conversation. Sex itself is something that generates alarm, panic, discomfort and aversion. It is taken for granted that man and woman are supposed to mate in order to procreate. Anything else, including heterosexual sex for pleasure, is considered taboo.

So, what does it mean to be bisexual in a country like this?

I am 22. A lot of people understand their sexuality when they are very young, sometimes as early as 9 or 10 years of age. I first toyed with the idea that I might be bisexual after I finished school and stepped into college. The funny thing is, even after I told myself out loud for the first time that I might be bisexual, it took me over a year to accept myself, because the first thing I felt was fear.

In a country where people are murdered for their religion, I couldn’t bear to imagine what would happen if I told those very same people that I was sexually attracted to women. I mean sure, I had had bisexual friends before and they seemed to be doing fine, but it’s different when it’s you. You think about your circumstances, your parents, your family, and you almost wish it weren’t true.

Step 2: Coming out as bisexual to your friends and family

The first person I told was a random friend from college. If you think that’s strange, then let me tell you, it’s infinitely easier to talk to strangers; that way even if they judge, you care less. She was super supportive. We are after all, a Westernized generation of millennials, we are progressive; sexuality is a very important part of popular culture. There is, however, a constant sense of doubt and dismissal in the attitude of people when you tell them you are bisexual.

Some think it is a phase, others have this way of throwing follow up questions at you, which make you doubt whether you actually are bisexual or not. Maybe it was because my ex boyfriend broke my heart. Maybe it was because the media has over-sexualized women’s bodies so much that I can’t help but think of women that way. Maybe it really is a phase. Maybe I think I am attracted to women because all my friends are women and I haven’t met the right man yet.

Does all that also come with a feeling of claustrophobia? Does it also make you feel like you are being forced to deny who you are?

I haven’t told my family yet.

Step 3: Meeting the expectations of being bisexual

Despite the conditions, despite the doubts and trepidations, I realized that living in denial wasn’t an option. I was too self-aware to pretend to be something I am not. Did the challenges end there? Not nearly. When you are bisexual in a country whose heteronormativty must be expressed in its very culture, it is difficult to move in society while freely expressing yourself. After all, “log kya kahenge” (what will people say) is perhaps taken more seriously than most constitutional rights.

Even for those who did not seem to think anything of the fact that I was bisexual had certain preset expectations of me, as if one misstep on my part would give them the excuse to discount my identity.

For example, during one particular house party I was invited to, I decided to wear a pair of trousers, a T-shirt and a linen jacket, where all the other women wore dresses. I didn’t think anything of it, and neither did the people who attended. Or that’s what I thought. While going home, the auto driver called me “bhaiya” which is a common mistake that people make when I am wearing “men’s” clothes. However, later that night, while speaking to a friend who had also attended the party, I realized there’s much more to people’s perception of who I am. She said, “Dude, are you completely a lesbian now? I thought you also liked men?”

The notion that I can’t like men because I dress like them, was not only a horrifying instance of bi-erasure, but I realized that for most people out there, people like me don’t even exist.

The idea that you have to either be completely gay, or completely straight and nothing else has haunted me, and it still does. My ex boyfriend didn’t realize that I was bisexual until after we broke up. Even after we stopped being romantically involved, we remained friends. It wouldn’t be wrong to say that the time we actually broke up for good was after I told him that I had started to develop feelings towards a woman. As friends, he should have thought nothing of it. However, he decided to accuse me of wasting his time when I was in a relationship with him, because obviously I was a lesbian, and I used him to experiment.

The feeling of helplessness when you are repeatedly told that you don’t exist, that you are a liar and you don’t know yourself is a burden that I realize I might have to wear for a while. I didn’t blame him for thinking that way. After all, I know for a fact that if I develop feelings for a woman, I will be labeled a lesbian, and if I feel for another guy again, everyone will presume I am straight. It’s the middle-ground that you are lost in. It is the middle-ground, aptly called no-man’s land, where the gray struggles to find place between the black and white, and desperately seeks recognition and acknowledgement.

Step 5: Finding the one

The funny thing about India is that it is progressive, but limitedly so. When it becomes general knowledge amongst your close friends and random people on dating sites that you are bisexual, they aren’t immediately dismissive of you. They don’t cringe at your presence, neither do they shun you. But there is an immediate and tangible shift in dynamics. People are free-er, more candid around you.  You might think, how is that a bad thing?

I didn’t immediately recognize the shift, but one day a person I met online asked to hook up with me. She was beautiful and from the 10 texts we had exchanged, she seemed like a nice person. However, after talking some more with me, she said, “I’d love to experiment with you. It must feel so good to be able to swing both ways!”

Now comes the most important, and perhaps the most difficult step. Straight people aren’t asked to prove that they are straight, but you are. You are told how you can stop being bisexual; how you are always being given an escape route, to be able to go back to the “normal” life. “What went wrong,” your parents and family members asks themselves, conceding that it is their “fault” that I have “turned out this way”.

Suggested read: Heteroflexible: All You Need To Know About A Rare Sexuality

But you persist. You tell yourself that there is no shame in being you, that the chances of finding true love are no less for you. You keep living and your keep taking all the doubts and difficulties that life has to offer, one day, one insult, one mockery, one dismissal, one rejection at a time.

“I can be in love with edges
yet still think fondly of
softness
and curves;
my curiosity
drips
with an eternal desire.” 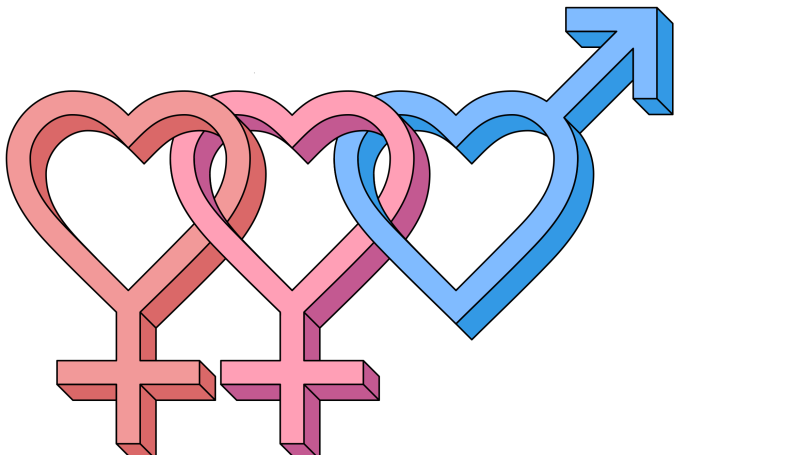 Article Name
What It’s Like Being Bisexual In India Today
Author
Aishani Laha
Description
Here is what being bisexual in India feels like, today.