#PrideMonth LGBTQ Art Compilation: A Discourse On Right To Pride

Marking the anniversary of the Stonewall riots, the first Gay Pride was held on 28th June, 1970. Since then the community has come a long way towards making a podium, and creating a strong voice. In order to involve all huge gender-spectrum, the movement is simply called ‘Pride’. Even the term ‘LGBT’ (standing for Lesbian, Gay, Bisexual, Transgender) has been extended to LGBTQIA (Lesbian, Gay, Bisexual, Transgender, Queer, Intersex, Asexual). What we now witness is a community that is welcoming, and one that has built its own kingdom from scratch. The battle is far from won, but it is still raging in full force.

The expression through LGBTQ art conveys a plethora of emotions surrounding the movement, and the community.

Let’s begin here. The lack of adequate reference material has reared generations of children into believing that men and women can be the only romantic combination. Fairy tales reek of gender roles, and propagate that only the ‘Prince Charming and a damsel’ have a shot at ‘forever’. When a female child is taught about the ‘good touch’ and ‘bad touch’, they are rarely ever told that it could also come from a woman. In ways more than one, we have all contributed towards encouraging this behavior. We have often asked friends if they are ‘interested’ in a particular person from the opposite sex, without considering their orientation. What I mean is, it is not particularly polite to use “Are you queer?” as a conversation starter; however, perceiving the general population as straight, by default, is impolite too. One need not wear their sexual orientation as a badge, for others to be considerate.

It is okay to feel uncomfortable. Gender, in itself, is a diverse spectrum, with the possible combinations tending towards infinity. Having stepped in and out of the wrong identities is not a crime. Several LGBTQ members feel threatened against revealing their preferences, lest they not be “allowed” to grow into another identity. The clarity of a gender identity is a privilege. If you are somebody who feels like they have been looking for love in the wrong bodies, then welcome aboard. There are so many of us dwelling on the same train, sailing towards a community we can call our own. It takes courage to recognize and act upon a situation when love falls out. I respect and applaud that.

If you look into suburban cinema, or take a trip into the old cinematic archive, then the heavy gender-bias makes itself amply felt. Until a few years ago, Bollywood was not conscious about how they portrayed their ‘queer’ cast. The character was, almost always, introduced and used solely as a comic relief. It is disrespectful to treat the LGBTQIA as a trigger word. We have almost pushed each other into wearing our sexual orientations as a warning. In fact, a lot of ‘locker room talk’ surrounds fear associated with homosexuality. Several people, mostly men, believe that gay men are invariably going to accost them. As outrageous as it obviously is, I find it funny that the lack of consent is attributed to ‘gay-ness’, when the majority of crimes are committed by the ‘normal’ heterosexual.

Capitalism preys on whatever is ‘trending’. In all honesty, the majority of companies could not care less about the cause which they create a product for, as long as it sells. ‘Love’ has been in conversation forever, and the economy has thrived on selling our emotions. The discourse around ‘pink capitalism’ is more important than ever. Companies make Feminist, and Pride merchandise, commodifying a movement that has undergone decades of struggle in order to surface. In 2017, a report emerged on such conduct by ‘ScoopWhoop’. Caravan Magazine’s Arnav Das Sharma reported their usage of the ‘Liberal’ upsurge in young voters, as a way to sell ‘relevant’ merchandise. Every ideology can now be turned into t-shirts, bags, totes, badges, et al. They are also used as the backdrop for emotionally manipulating consumer activities. Awareness of the toxic trend, can possibly lead to vanquishing it.

I do not believe in divisionism. However, in ‘Chak De’, when I watched the Indian flag being raised on the field, it did give me goosebumps. I can attribute it to Shah Rukh Khan’s speech, or the emotional context, but none of that takes away from the fact that one likes ‘belonging’ somewhere. The Pride flag is both a ferocious battle-cry, and a protective blanket. We are safe here, in the shelter of a Motherland we created for ourselves. The reason why the Pride flag is likened to a rainbow, is so that it embodies the entire color spectrum, as a metaphor for gender alignments. After years of living in closets, we have achieved our chance to celebrate, out in the open. Let onlookers contract some of our glory.

We may not belong in the bodies we were born with. If you have a child, then I want you to be careful in letting them choose their gender. Don’t buy your daughter Barbie houses, and pink feathery shoes. Don’t buy your son Monster Trucks, and take him exclusively to football matches. Gender essentialism is a criminal offense to one’s soul. Take your child to the store, and let them pick what they want. In case your child does not want their own body, then help them with it. This world is already too far gone. There is hardly any space to accommodate more trauma. We were given the bodies that we inhabit. Now is the time to choose our own. It is okay to feel stuck, to have somebody else’s voice stuck in your throat, but it is not okay to passively accept your ‘fate’. Destiny is our bitch now.

Read the caption of the image for proper insight. There is an abundance of young male YouTubers who run make-up channels. In January 2017, Manny Mua became the first male brand ambassador for the cosmetic brand, Maybelline. Age-old standards surrounding the ‘desired appearance’ of a man or woman, have restricted us from finding our own voice. My friend squealed when she saw Nick Robinson wearing eye liner in, ‘Love, Simon’. Make-up does not make a man gay. Nothing makes a man gay apart from his own sexual orientation. This world should be less uptight about the LGBTQIA being a contagious disease, and instead, spend more time educating themselves. In several parts of the world, children are pulled away from eunuchs, lest it should affect them negatively. Funnily, the only toxic element in this situation is the horrible parenting.

The discourse surrounding Pride has often bordered on anti-straight. I am going to attempt at both explaining and dispelling the concept. The Pride event, the entirety of the Pride month, is a form of protest for the right of ‘being’. The carnivals are beautifully crafted, as are the marches. But the colors should never distract you from what they actually stand for- the voices of the scores of people who weren’t allowed to be themselves. Some heterosexual people present at the Pride, are ‘allies’. But a lot of people indulge in it as a status symbol, or a mass scale party. That is disrespectful to the commanders of this war for existence. You would be shot dead if you took your tomfoolery to the country border. Just because the Pride army makes you feel welcome, does not give you the permission to take them for granted.

Sometimes, we feel entitled to putting a label on everything. It helps us see things in an organized way; a procedure that makes things easier for us to understand. In some cases, we also do that to human beings. We forget that it is not necessary for everybody to live and abide by our own rules, or fit into our categories. Gender is a spectrum, and there are an infinite number of combinations adhering to it. Sometimes, in trying to categorize ourselves, we run out of labels. People who recognize themselves as gender ‘non-binary’, use the lack of compartmentalization as their identity. They don’t want to compromise all that they are, by subscribing to one of our pre-set lists. It takes insane courage, an unimaginable amount of strength to stand up for yourself.

We have always been taught to be proud of who we are, unless we differ from ‘valid’ norms. It is almost like the Constitution of most countries- ancient, giddy with flaws, and in ardent need for change. LGBTQ art brings to light all the desires, and multiple realities that have been denied the right to exist for decades. While it is perfectly normal for heterosexual couples to indulge in romance, the slightest whiff of a non-hetero love story makes people ridiculously alert. In an era that is rapidly losing its sanity, I wonder where people find the time to pursue their ancient judgmental capabilities. I do not take away anybody’s right to recreation, but I’d wish they tried a hobby that did not entail poking their opinion into spaces that have no need for it. All of us have the right to find love, find happiness, and be unapologetic about it.

LGBTQ art is a scream of Pride, and a reminder that we are here, we exist, and we sure as hell are not giving up our space at the table. 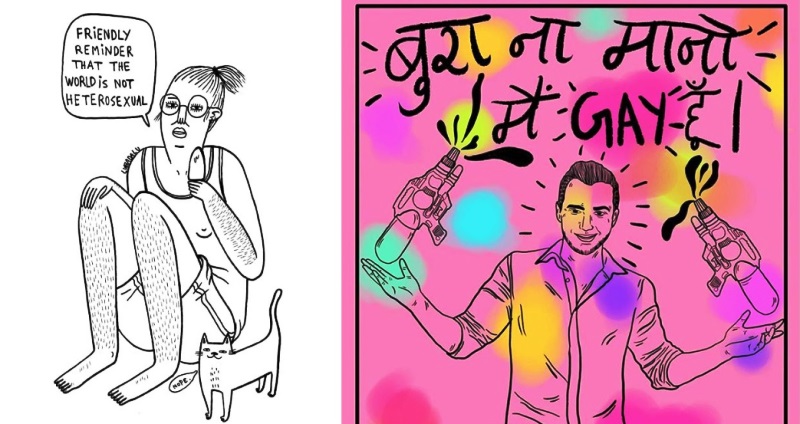 Article Name
#PrideMonth LGBTQ Art Compilation: A Discourse On Right To Pride
Author
Meghalee Mitra
Description
The expression through LGBTQ art conveys a plethora of emotions surrounding the movement, and the community. Let us celebrate the same today, shall we?