You may say it is a cliché but as all chestnuts go this one is true too: You always save the best for the last! This becomes spot-on during the awards season, when stars walk on different red carpets as a rehearsal for the main event, the Oscars Red Carpet.

So, in case you thought that there was no chance you could see anything better than what you saw at the Golden Globes or nothing bolder than at the Grammys, you are in for a surprise. The Oscars Red Carpet is like Hollywood’s grand finale of Dernier cri!

Here’s a sneak peek into the 10 best dressed celebrities on the Oscars Red Carpet 2016!

Cate Blanchett, who is nominated in the Best Actress category of the Academy Awards 2016, stole the show in this Armani Privé outfit. There is just one word that can describe this whole ensemble out here: Showstopper! We almost fell out of our seats when the “Carol” actress stepped onto the Oscars Red Carpet in this urbane design and flattering hairdo and makeup. Flawless from head to toe and therefore, number one on our list!

Television’s favorite, Kerry Washington, was far from a ‘scandal’ at the Oscars Red Carpet 2016. She pulled off the black and white combination with panache, wearing vintage Harry Winston diamonds. Kerry just knows what is rad for her, which is why counting on Harry Winston for her Academy Awards look was a superb idea! This ensemble not only accentuates her marvellous figure but also the colors look splendid against her skin.

Rachel McAdams walked the Oscars Red Carpet wearing August Getty Atelier. The actress is one of the nominees in the Best Supporting Actress category for her role as Sacha Pfeiffer, a journalist for The Boston Globe’s Spotlight team through their probe into the Catholic Church’s clergy sexual-abuse shame.

Moore, one of the presenters at the Academy Awards 2016, walked the Red Carpet in an all-black custom Chanel Haute Couture. You bet she has her fashion A-game on! This spectacular embellished black evening gown made Moore’s skin glow!

Speaking of custom, hours before the Academy Awards, preggie Chrissy Teigen posted a close picture of her bumpin’ bod getting seamed into her Oscars Red Carpet gown.  “Oscars Belly” captioned the Lip Sync Battle color commentator. Teigen, 30, who is expecting a baby girl with husband John Legend, wore a Fall 2016 Marchesa dress to the event.

Wearing Forevermark jewelry, Margot Robbie wowed the spectators! In a plunging metallic gilded gown that hugged her slender frame, Robbie beamed, to say the slightest! She sizzled the look by teaming it up with a dainty black clutch handbag and let her hair down in a fuss-free style. 5 on 5 to you Robbie!

What a breath-taking knotted updo! The starlet walked on the Oscars Red Carpet in a sheer white Givenchy Haute Couture gown. The cameras were surely doing double takes! The risky hairstyle, certainly upped the drama.

In an Armani Privé dress, flattered by Bulgari jewels, Naomi Watts shone on the Oscars Red Carpet. This feathered blue strapless Armani gown was what perfection looks like! The graphic gown was a very bracing change on the show. The cut-outs hugged her body just right! Good job there, Watts!

In a bespoke Louis Vuitton gown, pair of stilettoes and ornaments, Alicia Vikander, had dressed to kill. Congratulations to her for winning the Best Supporting Actress for the Danish Girl.

By the way, this Christian Siriano outfit is now up for auction in case you were thinking of donning it yourself! 😉 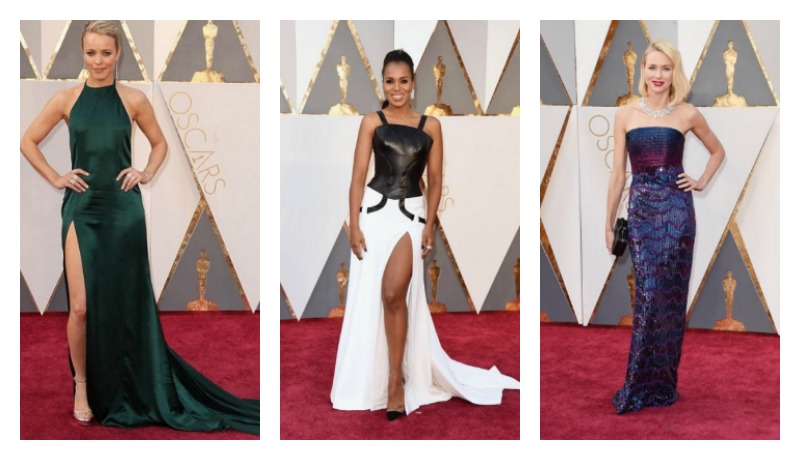