Let’s be honest, the world is going to the dogs, and there is very little left to love and cherish, which is why you need things to hold on to and believe in. all you skeptics out there are probably screaming “THERE IS NO SUCH THING AS LOVE” right now, but in truth, there are a number of couples who are living proof of the fact that love does, indeed, exist.

Suggested read: 10 Relationship Exercises To Save You A Trip To A Couples’ Therapist

Thus, in the time of dour need, I went about looking for some things which are going to make your inevitably happy, and came up with a list of things couples do, especially those who have been together for years and years and years, and aren’t even married yet. I hope this will at least melt your stone-cold heart, if nothing else can.

1. They have no lines when it comes to sharing

When you have dated a person for more than a few years, “sharing” doesn’t even constitute a work in your dictionary. According to dating experts (meaning people who have dated each other for quite an intolerable period of time), sharing is equivalent to owning.

These people are often found in each other’s clothes, and after a point of time, they just stop keeping track.

2. Their PDA game is in a whole other league

Couples who have just started dating have a number of “awwww” moments, most of which occur when they are engaged in major PDA. Holding hands, sharing a hug and even a kiss gives a new couple butterflies in their stomach. However, couples in long-term relationships have been through it all, and usually find new ways to express their love and affection in public, if at all.

Biting, licking, pinching, tickling and scratching are some examples of an old couple’s PDA. The best part is, it isn’t even strange anymore.

3. They know each other’s weaknesses

It takes time knowing what your partner’s weaknesses are, and even though love should mean that you never exploit those weaknesses, long term couples have found a way to bypass that holy rule as well. After spending this much time with each other, they know exactly where the buttons for the right things lie, and when and how to use them.

4. They have mastered the art of flirting

When you are in a new relationship, you go all out and exhaust yourself trying to flirt and entice your partner, so that they fall head over heels in love with you. However, one of the things couples do when they have been together for ~way~ too long is lose sight of what flirting and subtlety means.

Even though there is nothing but non-judgmental and unconditional love between such people, they still sometimes muster the energy to flirt with each other, and the best part is, even the littlest things are enough to accomplish the task.

5. They prefer the company of each other, even after spending all their time together

So what is they woke up together, went to sleep together, and did everything else in between with each other? Couples who have loved each other for such a long time, don’t have trouble loving each other some more when it comes to hanging out with others, because they would prefer being with each other than anyone else in the world.

They have their own idea of fun, and because they are completely in sync, they have no trouble getting out of sticky situations to escape to their own safe havens.

6. They have accepted each other’s weirdness completely

When you start dating a person, you don’t want them to know the secret weirdo that you truly are, in your heart and soul. You only present the best version of yourself, and hope every day that you don’t have a slip up and scare them away with your obnoxious sense of humor.

When you have been with a person for a while, however, you get to know exactly the things that your partner had been hiding at the beginning of the relationship, which is, their lame as hell sense of humor and every other creepy and weird behavioral patterns, which is exactly what makes them so precious.

Suggested read: 12 Stages Of Being In A New Relationship

7. They know exactly what would make their S.O. happy

S.O. stands for significant other guys, get with the times. Also, when you have been with a person long enough, you know flowers and jewelry and video games and chocolate and other generic crap won’t bring them real joy. One of the perks of being in a long term relationship is that presents are no problem at all. You know your S.O. through and through, and no matter how strange their wishes are, when you’ve been together long enough you know exactly what will bring them joy.

Buying groceries together, buying stuff for the house, cleaning the dishes together, talking about young and new couple’s like they are 80…these are just some of the things that couple’s who have been together long enough do. A lot of people believe that are actually married, and seeing one without the other is not only an impossible thing for them, but also for the people that they hang out with.

After a point of time, you automatically associate one with the other.

9. Personal space is a myth

A lot of people like their space, no matter how close they are to a person. Even when you start dating, you feel like you should give the other person physical space and all other kinds of space. However, once two people have been with other for a while, the whole notion of personal space goes out of the window, and one finds the other often draped across various parts of their body, whether it was invited or not. They tend to treat each other like human furniture, and the best part is, it is anything but annoying.

10. They still take each other by surprise

You would think that after dating for what feels like all of eternity to other people, long-term couples would get sliiiightly bored with each other? However, that is far from reality, because surprises tend to increase manifold when people are committed to each other for a while.

Whether it is finding one another pretty, surprising each other with alcohol on a weekday or anything random, their ability to take each other by surprise only increases with time and in the cutest way possible.

11. They can’t remember a time before each other

Sometimes it so happens that you get so used to a person that you can’t seem to remember a time in your life that you survived without them. Especially couples who have been together for several years now feel that way because they tend to do everything with each other.

Therefore, a past where they were actually unaware of each other’s existence is not only unimaginable, but also unspeakable. *shudder*

12. Being gross is second nature

Being gross in front of another human being takes a whole new level of comfort with another person. This is the kind of comfort level you achieve when you have spent the last few years of your life loving the same person, unalterably.

Strange odors, body hair, discussion about poop, and other gross habits are all part and parcel of their love story, and they wouldn’t change it for the world. Judging is something that was reserved for the first few months of dating, after which, these couples usually descend into their true nasty habits.

13. They are beyond feeling jealous about each other

Even though they can get quite possessive when someone else eyes their bae, they aren’t the normal, bitter, crazy person kind of jealous of each other anymore. When you have spent a really long time with another person, you know much you can trust them, and how much you can’t.

While a lot of new people would wallow in jealousy and insecurity, people who have been together for almost forever would probably be found checking people out together, while remaining completely secure about their own relationship.

14. They believe their partners are flawless

It is true that when you are just getting into a new relationship, you think your partners are angels descended from heaven. However, that cutesy phase, far from fading, intensifies into something quite out of control, where you refuse to believe your partner’s flaws, except when you are fighting of course.

Getting self-conscious in a relationship is normal. What makes for a good relationship is when your partner highlights your beauty instead of consolidating your insecurities.

There are a lot of things couples do which might sound strange for those who aren’t in a relationship as intense, lasting and looking as theirs. However, it is nonetheless, a lesson on love which can truly restore your faith in humanity, and give you hope that one day you too can share this kind of love with someone else. 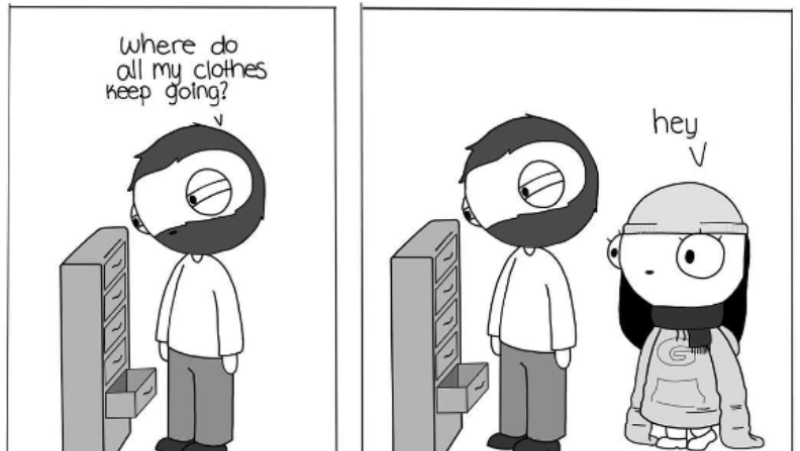 Article Name
14 Things Couples Do When They Are In A Long-Term Relationship
Author
Aishani Laha
Description
Here is a list of all the weird, strange, and adorable things couples do when they have been together with each other for way too long.