Why The Year 1960 Is Important For A Fashion Aficionado

Emergence of the hippie culture: The flower child

Hippie, short for the work ‘hipster’, became synonymous with a lifestyle that was an alternative to the conformation to the conservative culture and status quo. The hippie lifestyle emphasized the need to reconnect with nature and the need to exercise an individual’s freedom. And not surprisingly, the biggest challenge it posed was to the fashion of the day.

Emerging from the ‘Beat movement’ of the 1950s. the hippie fashion was essentially anti-fashion, wherein authenticity through poetry, spirituality and self-expression was desired, and reflected in the choice of clothing.

As romanticized as it sounds, the hippie clothing was mostly loose and made from natural fibers like cotton and hemp, with long flowing hair that was free from fussy styling products. The Beatniks’ black trousers and turtlenecks morphed into peasant blouses and jeans, and the culture further extended towards dyeing one’s clothes as well.

(Music Icon Cher was also a fashion icon, who exemplified the hippie culture with her long back hair, in a loose-fitting lace dress, standing barefoot)

The 1960s, thus, saw the popularization of the hip hugger bell-bottom jeans, short hemline skirts, or long, loose maxi dresses. The idea was to free the spirit, and found expression in the different patterns that were adorned by the fashion at the time. While psychedelic designs inspired by the Asia were a hit, paisley prints and even stripped bell-bottoms also found popularity.

But perhaps the biggest influence of the hippie culture on modern day fashion is the symbolism of what is known as the ‘flower power’. It not only symbolized the connection sought with nature, but also of peace, especially with the escalation of the cold war and the Vietnam war. Floral patterns were seen everywhere –as prints on tops and dresses, or flower patches on the jeans and skirts. Before the virtual flower crown that snapchat endorses, the hippies wore a real flower crown for most of the part in the 1960s, to highlight the natural beauty in times of despair and war.

(In 1965 Vogue cast English rose, Jean Shrimpton, as Spring, and festooned her brunette tresses with flowers.

If the sixties were to be characterized, it would be by the surge in the usage of bright colors that literally pop out of the posters to grab your attention. Celebrating the consumerist culture, pop art rebelled against the elitism and the self-reflexive expressionist movement that had gained momentum in the previous decade. The popularity of this form of art emerged by embracing mundane, everyday objects that appealed to the mass culture and bridged the gap between the everyday Americans and art.

And clearly, it also heavily influenced the fashion space at the time, and continues to do so even today. The bold, bright colors that heavily marked the sixties was the consequence of embracing the pop art culture into the fashion industry, along with adopting print forms into clothing lines. A famous example would be Andy Warhol’s ‘Souper Dress’, a paper dress that incorporated the Campbell’s Soup Can print. Other prints like stripes, checkerboard prints, were also infused into the fashion. The present-day influence of the Pop Art movement can be seen by the graffiti-inspired garments that many fashion houses adopted.

Casual wear was inspired by different trends at the time, and the modifications of the same. Shift dresses which were the loosened up, shapeless versions of the 50’s pencil dress, were popular for everyday tasks of running errands and home-wear. Mary Quant also introduced the ‘jumper dress’, a take on the childhood, which heavily incorporated polka dots, big bows and round collars that resembled dolls, paving way for the ‘Baby Doll look’.

Casual clothing also paved the way for loose-fitting clothing, including tops, blouses and sweaters that did not specifically enhance the bust or the waist. This was a departure from the waist-fitting culture that the 50s brought about, which had previously emphasized on the ultra-femininity, to a more sexually liberal attire that allowed women to choose their wardrobe without conforming to societal standards. Plaids and prints were not just limited to the skirts and shirts, but also in winter wear with designed winter jackets.

Suggested read: Milan Fashion Week 2018: Here’s What You Can Expect This Year

The fashion that we take for granted today, that allows for self-expression without the need to conform to rules and social etiquette, can be greatly attributed to the various fashion movements that emerged in this decade. The mini-dresses of the 60s have been normalized as just ‘dresses’, the fact that fashion can also be comfortable, and the shift from ultra-femininity to sexual liberation were initiated by the anti-fashion movement at the time. While several trends from the era keep making a comeback every now and then, some trends were immortalized into everyday fashion, only adapting present trends to make it relevant for the contemporary times. Be it the textured tights, or tall boots, A-Line miniskirts to trendy coats, the 60s swing well into the present decade, and artfully so. We have a lot to be thankful for to the 1960s! 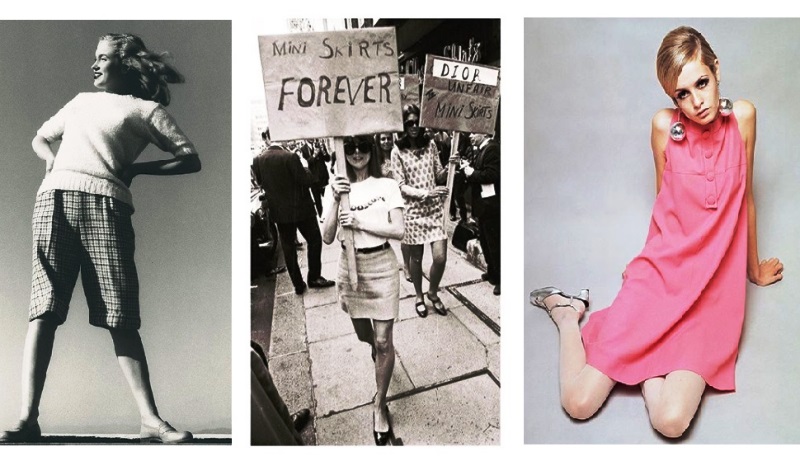 Article Name
1960s Fashion Trends: Here's Everything You Need To Know
Author
Sreetama Basu
Description
The 1960s fashion trends were influenced by films, the rising rock and hippie culture, and various political protests which makes them remarkable.
Read the rest of the article: Previous