Milan Fashion Week 2018: Here’s What You Can Expect This Year

Year endings are not easy. They are a time for retrospection, looking behind at the year that went by; and preparing ourselves for everything that lies ahead. We often catch ourselves feeling anxious about the New Year. However, it is important to remember that there are good things to look forward to as well, things that make life a little less dull and a lot more colorful. Such as the Milan Fashion Week 2018. We’re not ashamed to admit that this is one of the top things that we’re looking forward to in the New Year. They’re set to take place between the 21st and 27th of February, and we’re miserably failing to hide our excitement for one of fashion industry’s most coveted and sought after events.

This is where the biggest designers of the industry will flaunt their creations which will go on to set the trends for the upcoming year in fashion. The event will be graced by the who’s who of the world of fashion and also gorgeous celebrities from the entertainment industry. Milan Fashion Week 2018 boasts to be one of the biggest events in fashion; the Mecca of fashion, as Milan is aptly titled, is where the world will witness the best of fashion trends that are definitely going to make the headlines in the upcoming year.

Suggested read: 5 Fashion Trends That Are In For 2018 And 4 That Are Out

It’s become clear that fashion is no longer about merely the clothes, the garments, jewelry or the shoes; fashion now has come to encompass every aspect of the individual. The message is loud and clear- let your outfit reflect the kind of person you truly are. This Spring it is all about highlighting the best in you and wearing it out proudly for all of the universe to witness. Milan was no exception to this emerging practice.

This time at Milan, there were two distinct characteristics that highlighted every show that was put up. First was the designers’ embrace and celebration of history in their works, and second, was the omnipresent influence of art in their designs and their increasing belief in its elevating spirit. It was also a week of new debuts that showed thoughtful collections and great promise in their creativity. We’ve broken down some of the highlights of the fashion week in the following list-

The show opened with sheer black looks inspired by the supermodels of the 1980s and 1990s that were interpreted on the runway as sheer suiting, filmy black dresses and corseted frocks which were a fitting tribute to the age of the Supers. It comes as no surprise that the show was decked up with the Queen of Hearts print, which made an appearance on several bedazzling dresses. Sequins, paillettes, crystals, and shimmering fabrics were the main elements of this collection, and nearly every look contained some element of shine. Floral prints, too, were found everywhere followed by a cannoli printed green, body hugging dress.

Milan Fashion Week Spring/Summer last season was also the week of anniversaries. Donatella Versace commemorated the 20th anniversary of her brother, Giani Versace’s untimely death, by reenacting one of her brother’s most iconic moments from 1991, when four supermodels walked arm in arm as George Michael sat on the front row. Giani introduced the world to the concept of supermodels and the metal mesh cocktail dress, and invented the celebrity front row. It was thus a fitting tribute that ended with five of the original Versace supermodels- Cindy Crawford, Naomi Campbell, Claudia Schiffer, Helena Christensen and former French first lady Carla Bruni. Donatella decided to celebrate her brother’s legacy by using her brother’s famous exuberant prints as the basis for her collection.

Gucci’s Ode To Elton John-
For the latest Spring/Summer collection, Gucci’s creative director Alessandro Michele paid an ode to the power of creativity, which he cited as an act of resistance. Gucci’s resistance to the monotony of the world came in the form of several references to Bob Mackie and Elton John, and the glitzy fashion of the 1970s; the runway was fashioned like the river Tiber that flows through the heart of Rome, around it was a map of statues and gates drawn from Indian, Egyptian, Classical and Aztec styles. Logomania still remains one of Gucci’s central motifs, and the show also used talismanic jewelry as an accessory. 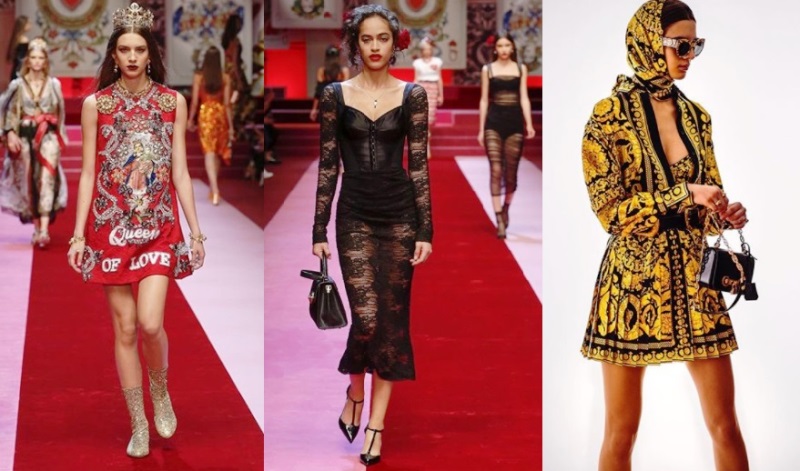