20 Times We Have All Decided To Give Up On Dating

We have all had those times when we’ve considered giving up on dating and taking up celibacy.

1. After that awful date that made you feel physically sick that you had to actually bolt out.

2. When that awesome and amazing person you come across on Tinder is a Grade A creep in real life.

Me: This is a nice restaurant. I like the food here.

3. When you think you hit it off with someone, only to know that they are only flirting with you to get to your friend.

Me: Hi, want to get a drink sometime?

I mean, if they can’t work it out, what is the point of us mere mortals even trying?

5. When that girl you hated in school is happily married and has two kids with a hot guy.

6. When the last date you had was set up by your mom.

Why do I need a guy, exactly? *brrrrrrR*

8. When you get ready with a lot of enthusiasm (and even put on your false lashes) and the guy turns out to be a douchebag.

What is the point of even trying anymore?

9. When every time you open your Tinder inbox, it is flooded with d*ck pics.

And you think of the amazing sex you had a year ago. Which doesn’t help.

11. When the hot guy you wanted to date finally asks you out.

And as it turns out, he is married!

12. When the date you went on last week was sooooo amazing, but the guy never calls you back.

13. When you take a trip so good that you don’t feel the need for a relationship anymore.

Who needs romance when you got best friends, eh?

14. When you are lying in your pyjamas, watching television with a date to go to in an hour.

And you are thinking, “What’s the point? Screw it!*

And continue lying in bed!

15. When people keep giving you crappy advice about dating.

‘Just give him a chance’

‘Why don’t you go on a date with my cousin?’

Me: Why don’t you kill yourself?

16. When you are on a date with a perfectly nice guy and don’t know how to act.

Him: *makes an intelligent joke*

*stabs self with fork*

17. When the guy who everyone thinks is hot asks you out.

But you don’t feel attracted to him one bit.

What the actual f*ck, God?

18. When you connect so much on Tinder, but neither of you asks the other on a date.

Him: So now what?

19. When you go on a date after a long time with the intention of only having sex.

Me: So… you want to come over?

Him: Not really. Good night ☺

…But even that doesn’t happen. WHAT AM I DOING WRONG?!

20. When all you friends are getting married, and you are always the one to go without a date.

Everyone: Aw, poor you.

We’ve all been there, sistas! So fret not and brave these hard times coz the right guy is just around the corner, I am sure! (Or I could be lying, you’ll never know!) 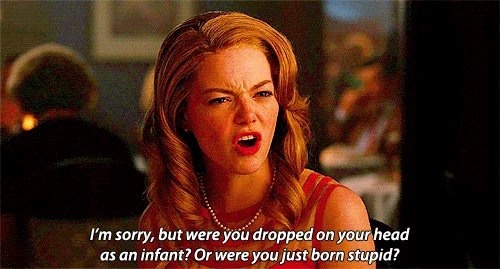 Article Name
20 Times We Have All Decided To Give Up On Dating
Author
Amrin Talib
Description
Dating is hard.